HOW A PENDULUM CLOCK WORKS

A clock movement begins with a power source, something to make it go, which can be either a mainspring or a weight.

The power source attaches to a gear (“main wheel”) which drives a series of gears (“wheels”) called a Gear Train.

The purpose of the gear train is to convert the slow rotation of the main wheel into the faster rotation needed to tell the time. Each wheel in the train turns faster than the previous one.

Left to its own devices, the gear train would whiz along like a buzz saw, and would run down in a few seconds. What regulates its speed instead is called the escapement. The escapement has two parts. The first part is the escape wheel (“EW”), which is the final wheel in the train.

The escape wheel has sharp, saw-like teeth. The other wheels have blunt teeth.

The other part of the escapement is the anchor, or verge, or pallets.

The anchor is a pivoted rocker-arm, with a sort of hook called a pallet on each end. The anchor regulates the speed of the escape wheel in the following way.

This escape wheel is trying to turn in a clockwise direction. (EWs may turn either way. The principle is the same.) It can’t, because the pallet on the left (red) is blocking a tooth (red), preventing it from turning. As the anchor rocks to the right, that tooth will be released, allowing the escape wheel to turn.

But it won’t turn very far, because when the anchor rocks to the right,
the pallet on the right (blue) will block another tooth (blue), stopping the wheel from turning. It will have turned only the distance from one tooth to the next.

Then, when the anchor rocks to the left, that tooth will be released, but the next tooth on the other side will be blocked by the pallet on the left.

The rate of the pendulum is determined by its effective length: roughly, from the suspension point to the center of the pendulum bob. The longer the length, the slower the wag.

So the rate of the pendulum can be adjusted by moving the bob up (for faster) or down (for slower.

When a pendulum is started swinging, friction and other sources will eventually cause it to slow down and stop unless it’s given an occasional push. The push comes from the escape wheel.

The escape wheel, powered by the mainspring (or weight), is trying to turn clockwise. The tooth outlined in red, is pressing against the pallet, trying to force it upward. When the anchor rocks to the right, the outlined tooth slides off the pallet, and as it does so, gives the pallet a tiny push or impulse upward. The impulse travels down the crutch, and to the pendulum rod. It’s not a huge impulse: just enough to keep the pendulum wagging.


That’s how a pendulum clock works.
​

[Thanks to the late Dr. David Goodman, for the idea for this article.] 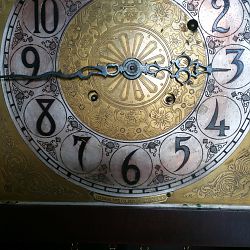 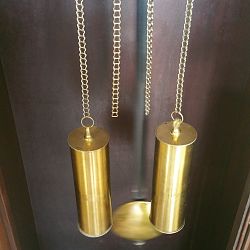 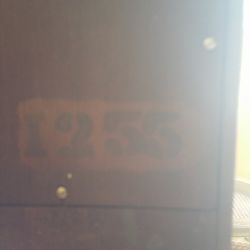