BUSHING USING NOTHING BUT HAND TOOLS

This article describes the procedure for installing bushings using only hand tools.

Wear in a pivot hole is always in one place on the circumference. What starts out as a round hole becomes pear-shaped, with a lobe worn on one side of the hole. As a pinion drives the next wheel, it presses that wheel's pivot against the opposite side of its pivot hole. That's where the wear takes place.

It's often possible to see where the wear is, just by looking at the pivot hole. It's also often quite difficult, even with a good magnifier. So it's generally a good practice check and mark with a felt-tip where the wear points are, before disassembling he movement.

When a gear train is turning in its normal direction, each of its pivots will be pressed against the wear point of its pivot hole.

​
But when you rock the train in the opposite direction, with finger pressure on a wheel, the pivots will spring to the opposite sides of their holes, away from the wear point.

​
By rocking the train back and forth, and watching the pivots, you can see where the wear points are, and mark them on the plate. You can then disassemble the movement and proceed to the next step.


The tools required for bushing are:

•A scriber and straightedge.

ROUND NEEDLE FILES — A SET OF SMOOTHING BROACHES
​

•A pin vise, to hold the broaches
•A piece of steel for an anvil block
•A small hammer

A SELECTION OF PIN VISES — AN ANVIL BLOCK AND HAMMER
​

•An assortment of bushings

The first step is to change the pear-shaped hole into a symmetrical oval.

1. Determine (by eyeball) where the center of the original circle was.

2. Scribe a line across the circle at that exact point, with half the circle on one side of the line and a half-circle plus lobe on the other. You are bisecting the original circle, not the pear-shaped hole.

3. With your round needle file, and observing the lengthwise line, create a new lobe identical with and exactly opposite the original lobe, until you have an oval hole centered on the center of the original round hole.

4. Now, with a cutting broach, broach the hole FROM THE INSIDE OF THE PLATE until it is round. A broach automatically centers itself in the middle of an oval. Since that is where the center of the original hole was, the broached hole is still centered on that point.

5. Continue broaching until the hole is not quite big enough to accept a bushing as a tight force fit. This involves repeated stopping and checking. Make sure to keep the broach at a right angle to the plate, in both dimensions, so the hole is straight through. Then, with a smoothing broach, lightly smooth the inside of the hole.

6. Use a bushing slightly too small for the PIVOT. You'll broach it to fit later.

7. Force the bushing into the hole, from the inside of the plate, until it is flush with the outside of the plate. Use a small hammer and an anvil block and tap it into place.

8. File it flush on the inside of the plate.

9. Broach and smooth the bush to fit the pivot.

With experience, you should eventually be able to do the filing without the need for scribed lines.

A further step, recommended by some, is to "lock" the bushing into the plate. Center a steel ball bearing or a round-nosed punch on the bushing, resting on the anvil block, and smack it with a hammer. This will slightly expand the bushing and make it grip the hole in the plate. I've never found this necessary except when the hole has been broached so wide that the bushing is no longer a force fit.

The foregoing explains how to do bushing using only tools you normally have on hand for doing clock repair. But by spending just a little more money, you can make your life a lot easier when it comes to getting the hole the right size.

Bushing machines use precisely sized reamers to open the hole for the new bush. These reamers come in both KWM and Burgeon sizes. There are also handles for these bushing reamers.

The picture shows two KWM reamers and the handle for them. The reamers should be used ONLY for sizing the hole, not for the initial cutting. Follow the earlier procedure until you have broached the oval hole into a round hole centered on the original hole. The reamer cuts fast, so be careful. Make sure to keep the reamer perpendicular to the plate in both dimensions, so the hole goes straight through. Stop turning as soon as the reamer pops through. Once you've opened the hole with the reamer, no further broaching is needed. Then install the bushing as explained above.

Reamers cost about $15 each. The handle is about the same. Don't buy all the reamers at once. Buy just one for the size bushing you use most of the time. Then when you find yourself using another size a lot, buy a reamer to fit.

NOTE: After you've used the round file to make the oval hole symmetrical, use a BROACH to make it
round. After it's round, THEN use the reamer to make it the proper size. Skip the broaching step and
you'll have problems. Trust me. 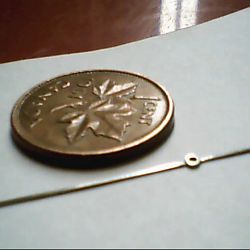 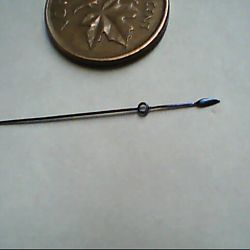 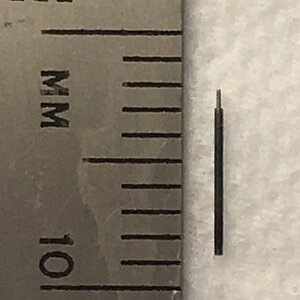 An automated review of this page attempts to determine its readability in English (US). The page contains roughly 1,099 words across 101 sentences.