Private label watches are those watches upon which the manufacturers placed their customers' choices of markings.

What is a Private Label Watch?

Private label or contract watches are collector's terms for watches that have been marked for a specific retailer or occasionally, a jobber - a wholesaler (people are perhaps more familiar with the term House Brand). A more in-depth discussion of what constitutes a private label watch can be seen in the Message Board thread entitled 'Definition of a "private label" watch'. Just about all the watch companies, including the Swiss firms, marked both the watch movements and/or dials in just about any manner for any customer who wished to pay for the service. These special order watches may have differed from the normal factory product only by the names that were applied. Or, there may have been a Private Label Adjustment or finish ordered that varied from manufacturer's described adjustment for the watch grade being made under contract.

Whose Names Went on the Watches?

Private label watches were contracted for by a large range of companies, from Sears, Roebuck down to the smaller jewelers in the little towns. The Illinois Watch Company probably produced the largest number of private label American-built watches, a number of which, mostly those with names associated with railroads, are considered to be highly collectable. Two of the best known of Illinois' private label watches were those furnished to the Burlington Watch Co. and the Santa Fe Watch Co. The Waltham Watch Co., along with the Hamilton Watch Co., the Elgin Watch Co., and others supplied RR-Marked Watches to the Ball Watch Co. Hemsleys Canadian Railway is an example of another railroad associated private label name, built for R. Hemsley, Montreal, by the Longines Watch Co. The prestigious firm of Mermod, Jaccard & Co., St. Louis, had watches made bearing their name by a number of watch companies, including Agassiz. Seth Thomas built and labeled watches for S.O. Merrill, Nashville. The list of private label names is endless and they provide a nearly infinite series of variations for collectors. Occasionally, a Google search will turn up information about the retailer whose name is on a private label watch, and sometimes a picture of the store.

What was the Cost?

There are few exact references for the costs, but its been written that, for some watch companies, if five or more watches were ordered, there was no charge for marking the movements. Specially marked dials were said to cost 25 or 50 cents each. Some watch manufacturers were more liberal. Private label watches were contracted for by a large range of companies, from Sears, Roebuck & Co. down to the smaller jewelers in the little towns. Several examples of private labeling availability (in these instances, of Hampden watches and Dueber cases) are noted in the 1917 Oskamp-Nolting Co. catalog. The illustration of the 18-size Standard Dial in the lower right-hand corner of page DH02 is over the notation that there is "No Extra Charge for Special Name on Dials." Page DH06, showing 12-size movements, has a case cuvette (cap) illustrated in the bottom center of the page. It is captioned, "Dealer's Name on Caps of 25 or More 25-Year Cases and on Single 14-K Gold Cases, Without Charge."

Private label watches were frequently signed on both the movements and dials. However, there were enough exceptions that one cannot automatically say that a watch bearing a private name on the movement must have that name on the dial. That kind of knowledge comes with experience and even then, it is difficult to judge specific examples. Frequently, the name is fired into the dial and is usually under a top layer of clear glaze. This makes the name permanent, not subject to loss during cleaning. However, some dials have private label names that are just printed on the top layer of glaze and can be damaged easily. Thus, care should be taken in cleaning.

A comprehensive list of Elgin Private Label Watches is available online, thanks to John Fogarty.

What do you consider a Private Label Watch?

Definition of a "private label" watch 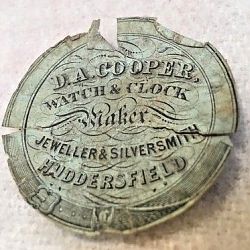 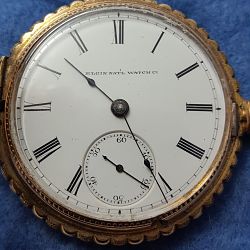 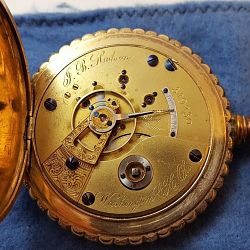 An automated review of this page attempts to determine its readability in English (US). The page contains roughly 745 words across 57 sentences.