This page is a chapter in Book Hamilton Watch Company

The Hamilton Watch Co. started up in Lancaster, PA in the middle 1890's (see Greg Frauenhoff's description of Hamilton precursors). From the start, it positioned itself as a manufacturer of quality watches. For about 50 years, over 50% of the pocket watches it produced were the high grade necessary for use in the railroad market. At least two of its railroad grade watches were produced in quantities of more than a half of a million each over a period of decades. Hamilton was successful through the 1920s, buying the Illinois Watch Co. in 1928. Production ceased in the U.S. in 1969, although watches were still being assembled from parts and finished for several more years. The firm has continued existence as a member of the Swiss conglomerate, SMH and its successors.

In seeking information about a watch, it is the serial number on the movement (the "works") that is important. Basic information about a Hamilton watch is available online to NAWCC members using the Hamilton production ledgers (see References, below). Oldwatch.com's Hamilton Production Date Chart, or the PocketWatchSite's Hamilton Date Table, are also an online means for determining the very approximate production date of Hamilton pocket watches. Hamilton's pocket watch serial numbers weren't assigned in strict chronological order. Instead, huge blocks were allocated by watch size. If you check this 1947 serial number list,


It's a fairly safe bet that 100,000, 200,000, 300,000 or 400,000 of one size watch weren't made before making similar numbers of another size of watch. Examination of the Hamilton production ledgers shows that within runs of a grade, there can be several years of variation. Just to demonstrate how difficult it is to come up with an accurate production date based upon a serial number range, this Scan From A Hamilton Production Ledger Page shows that the 992s within the tiny range of 786001-786020 were finished and sold almost two years apart. Thus, attempts to use serial number vs. date lists (created by using the average number of watches produced over a period of years) as anything other than gross indicators of date of production are flawed to a greater or lesser extent. In general, we think of serial number lists (not just for Hamilton, but for other watch manufacturers as well) to only be accurate within a year or two at best, and recognize that there are numerous exceptions wherein which the dates may be off as much as 3 years or more.

If the information is only desired for one or two specific watches, NAWCC Members can obtain the exact dates many Hamilton watches were finished and sold by accessing the serial number data base (see references below), or by sending in a Member Research Request. Those who are not NAWCC memebers may send in a Non-Member Research Request.

The grade 992 was in continuous production from 1903 to 1931, and then with a modification, the application of an Elinvar Balance (992E), from 1931 to 1940-1. This was an extremely popular watch, of which well over 610,000 were made. Thus, it is the most popular railroad watch ever built, surpassing its successor, the grade 992B by around 80,000. You can view Hamilton's description and specification of the 992 on page 5 of the 1912 Hamilton Hand Book (courtesy of Duke University's "Emergence of Advertising in America" website). Notice that it was sold as a movement only. In the early-to-mid 1920s, a cased 992 sold for $55 - $65, depending upon the case quality. An example of the pricing can be seen in the 1923 Baird-North Catalog (a grade No. 950 movement is shown in the ad, but the description is that of the grade No. 992). Although the Hamilton Watch Co. produced the 992 as a factory-cased watch Starting in 1924, it could still be had as a movement only, to be cased by a local jeweler or by a mail-order firm, as seen in this 1928 Ad. To help us understand the proportion of cased watches to uncased movements sold, after researching the subject in the Hamilton papers on file at the NAWCC Library, Don Dahlberg reported the following on the NAWCC Pocket Watch Message Board on December 15, 2005:

Grade No. 992E uncased movements were exported to Canada in shipping tins as late as Serial Number 2,652,721 (picture by Larry Buchan) to be mounted in Canadian cases.

Hamilton's first run of 992s was 302101-302200. Its highly unlikely that any of these (or quite a few afterwards) were modified to have a double roller escapement prior to leaving the factory. However, once Hamilton decided to make all 992s with a double roller escapement (serial number 379000 is frequently mentioned as the cutoff point), any 992s remaining in inventory were changed and, one major researcher reported that when 992s were returned to Hamilton for repair, these were also upgraded.

The 992B was in continuous production from 1940 to 1969, with additional watches being assembled from remaining parts (sometimes from 4992B or 950B parts). With a total production quantity of over 520,000, it was the second most popular railroad standard pocket watch ever made, only being surpassed by its predecessor, the 992 (including the Elinvar variation, the 992E). The 992B was furnished in the variety of Hamilton Cases, the pictures of which were assembled by Robert Sweet from information provided by Don Dahlberg and the NAWCC Library and Research Center. Hamilton also fitted the 992B into a small number of substitute cases. And, uncased movements were Exported to Canada in Shipping Tins (picture by Larry Buchan) for mounting in Canadian-Made Cases.

The 950 series consists of three grades; the No. 950, fitted with a conventional temperature compensated balance; the No. 950E, the same movement but containing an Elinvar hairspring; and the 950B, a completely new design utilizing an Elinvar Extra hairspring. All are a 16-size, 23-jewel movement. All three were sold as complete watches in Hamilton cases. Having said that, the No. 950 was mostly sold as a movement only, to be placed in a case of the customer's choice at the time of retail sale.

Don Dahlberg, quoting from Hamilton records written by Lowell Halligan in the 1940s about their history, wrote that the specified adjustment for the 992 and 950 was:

The actual 992B & 950B Product Specification documents are available online for viewing:
992B
950B

The grade 994 was a 16-size, bridge model, 21-jewel movement, built between (approximately) 1913 and 1920. It was believed that the No. 994 was Sold Only as a Cased Watch, timed and adjusted in the case at the factory. And, according to page 9 of Hamilton Serial Numbers and Production Figures with Price Guide, Roy Ehrhardt, Heart of America Press, Kansas City, MO, 1981, total production of the lever-set version was 800 and only 301 of the pendant-set version were made. However, recent research has shown that 299 No. 994 movements were sold uncased and that the actual production numbers are 800 lever-set movements and 400 pendant-set movements, see the 19-Apr-09 Thread on the subject.

Produced in relatively small numbers, Hamilton's grade No. 947, an 18-size, 23-jewel, nickel, full-plate hunting movement was one of the finest watches the company made. Its quantities and variations are discussed in some detail in a message board thread entitled Hamilton 947 questions?, while a separate Encyclopedia article lists Hamilton Grade No. 947 Reported Examples.

There are a number of open-face, 21-jewel 18-size and 16-size watches, adjusted to five positions, that have Tu-tone damaskeening, are fitted with dials marked "Hamilton Adjusted for RR service - 21 jewels" and which have no grade number marked on the movement. These are discussed in the NAWCC Bulletin article "Railroaders' Corner - Hamilton's 992 Part 2: The Extras and the Specials" (see References, below). This is a private label watch, built for a Chicago jeweler and watch inspector, Geo. H. Tucker. The 16-size movements are known to have very light, hand-scratched numbers, located just below the stamped Hamilton serial number. The meaning of these numbers has yet to come to light.

Hamilton seems to have first offered factory-cased watches in 1909, starting with the introduction of the 16-size, 23-jewel grade No. 950. Descriptions of these may be viewed online on pages 2 & 3 (accessed as page 3) of the 1912 Hamilton Hand Book (courtesy of Duke University's "Emergence of Advertising in America" website). According to a September 14, 2008 Post on the NAWCC American Pocket Watch Message Board by Jim Haney, these cases were made by Joseph Fahys & Co. Hamilton railroad model cases were introduced Starting in 1924. Don Dahlberg has done extensive research into these and has posted images of the First Eleven Models. An extensive discussion on the factory-cased 992 and 992B is available on the NAWCC Pocket Watch Message Board.

Also, TimeAntiquarian's Pocket Watch Database provides the grade, size, jeweling and other data for the Hamilton watches whose serial numbers are entered (use dropdown menu to select "Hamilton").

Hamilton Watch Company Ephemera, which currently consists of 1911-1929 catalogs and price lists (more to be added), is also available to NAWCC members who are currently logged in to the NAWCC website.

A wealth of information about Hamilton and its watches can be accessed through this Compilation of Hamilton NAWCC American Pocket Watch Message Board Threads.

rrstd's Hamilton Watch Company website has examples of Hamilton movements, dials and a wealth of other interesting items.

The Hamilton 992B Railroad Pocket Watch, Hamilton Railway Special is discussed in detail.

Hamilton Hand Books
Factory descriptions of some Hamilton watches may be viewed online in a large number of Hamilton Time Books in Fred Hansen's Comprehensive Post on the NAWCC American Pocket Watch Message Board. More appears in the 1912 Hamilton Hand Book (courtesy of Duke University's "Emergence of Advertising in America" website),

Hamilton History
A summary of the beginnings of the Hamilton Watch Co. appears in Greg Frauenhoff's post in the Message Board thread entitled "Hamilton in the early months."

To find out about the Hamilton Watch Co. see Tom Watkins’ Hamilton Website.

Hamilton Production Ledgers
Hamilton Production Ledgers were donated to the NAWCC Library & Research Center. These show the serial number, date finished, date sold, grade and the distributor/jobber/dealer to whom the watch was sold. See Sample Page 1 which shows 992L's starting at serial number 786,001 (the S. Fin and S.F. in the grade column indicate Special Finish) and Sample Page 2 which shows some early 999Bs. The ledgers go up to serial number 824,700 and then portions of the later serial number series such as the C, 4C, 1B and 2B. These are the serial numbers for 992Bs, 4992Bs, 999Bs and the '2B' series of 950B's. Circulating microfilm copies of the ledgers are available to the membership by mail, three reels at a time. These are also available online to NAWCC members who are currently logged in to the NAWCC website. 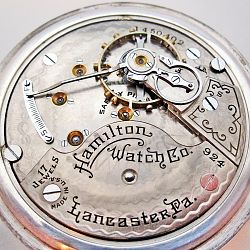 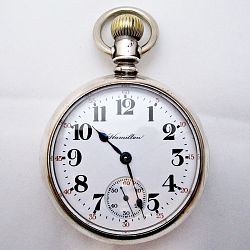 An automated review of this page attempts to determine its readability in English (US). The page contains roughly 2,859 words across 249 sentences.