Rockford's early (pre-1888 or so) high grade movements can, generally, be identified by the following markings on the the plates (usually on the barrel bridge):

In addition, these movements are always marked "Adjusted" and have the features normally associated with high grade movements such as gold jewel settings, etc.

They were made in models 1, 2, 3, 4 and 6. Various details, likely production runs, and known examples are discussed below.

Cover of early Rockford product line booklet. Since later versions of this booklet are dated and numbered while this one is not, it's very likely to be the first edition of such a booklet, dating to c. 1877. Note that Rockford is offering both key and stem-winders. Note also the line "The Best Full Plate Railway Time-Keeper Made". Even from the start Rockford promoted it's product towards railroad men and the traveling public.

Rare promissory note from 1878 showing a cut of a "19 Ruby Jewels" movement:

Short note from a May 1889 trade magazine on Rockford's first watch, which was presented to Company President Levi Rhoades. This watch, with the serial number 1, is a "19 Ruby Jewels" grade. Pictures of it can be found in Roy Ehrhardt's 1980 Price Indicator. The reader might find it interesting that this watch underwent significant alterations over time.

Model 1 mvts are pure key winders and generally have only one case screw.


Cartoon found as an insert in a Rockford 1880 product line booklet:

S/n 13797, an example of a "19 Ruby Jewels" model 2 movement. Courtesy Tom McIntyre. Note the flat hairspring, which is characteristic of the "19 Ruby Jewel" movements.

S/n 58702, an example of a "15 R" model 2. Courtesy Keith R. This is a "transitional" variant of the model 2 "15 R"
movements in that it has a Breguet hairspring (early ones have flat hairsprings) as well as the regulator, spring and
index being mounted entirely on the balance bridge, similar to the model 3, 4 and 6 examples. 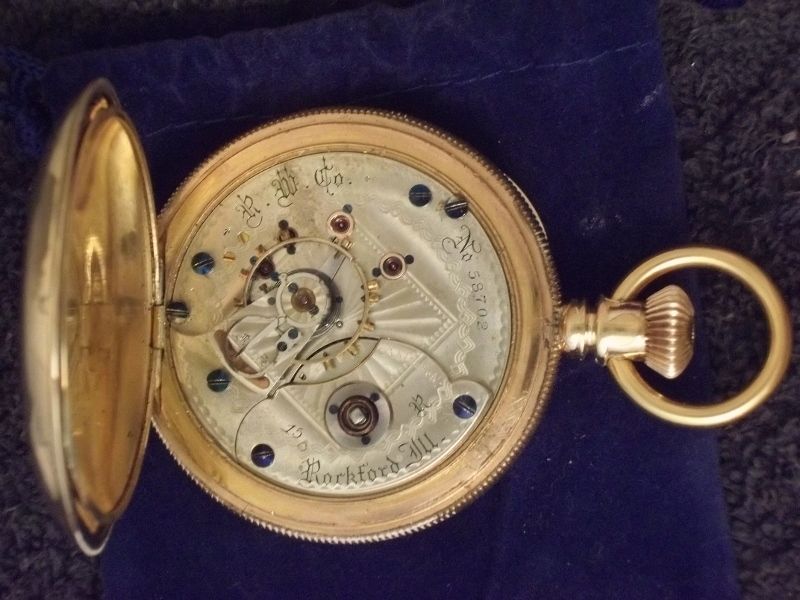 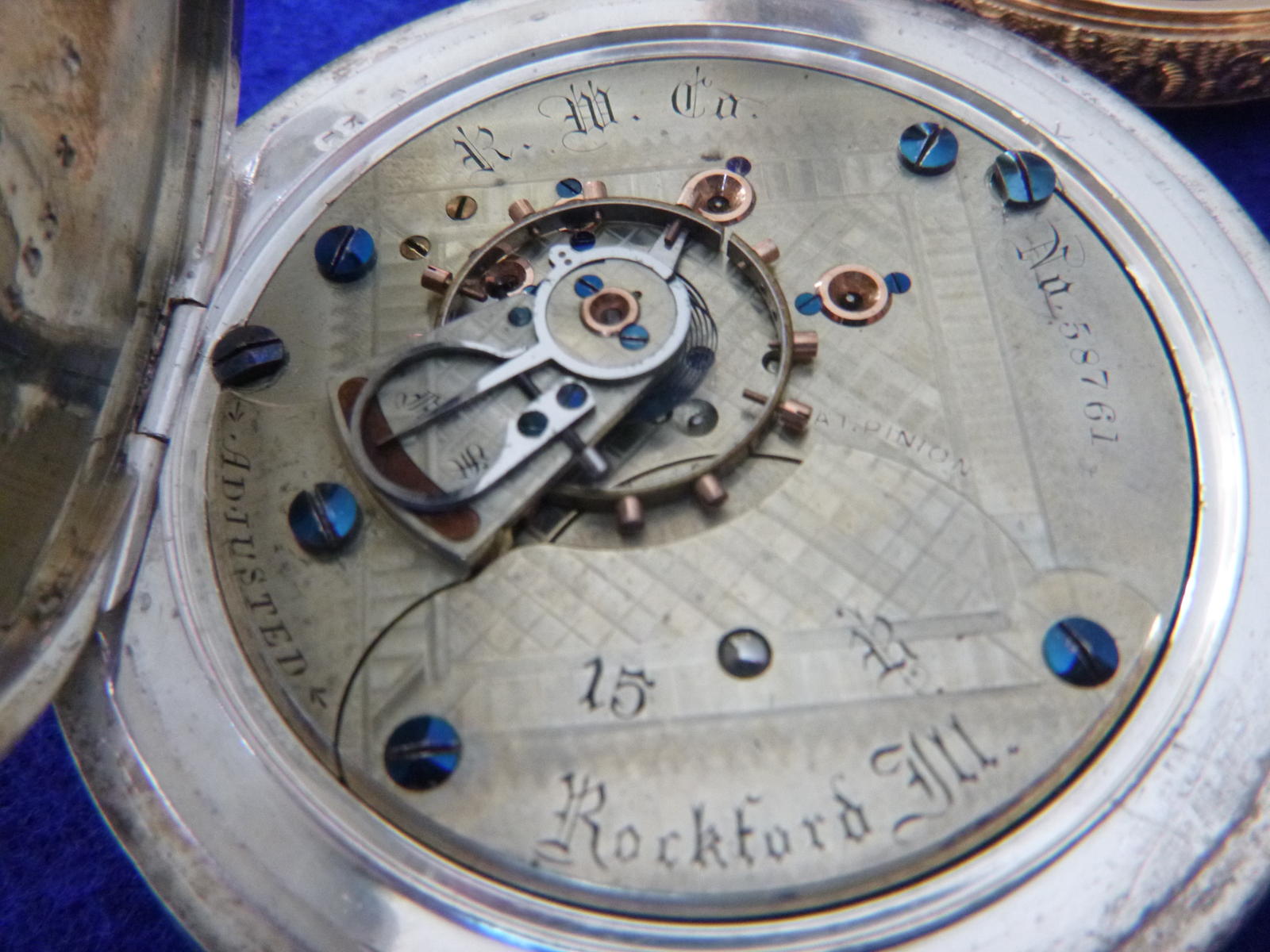 Model 3 mvts are pure stem winders, having no provision for winding with a key. Note the raised gold jewel settings for both the 3rd and 4th pinions. 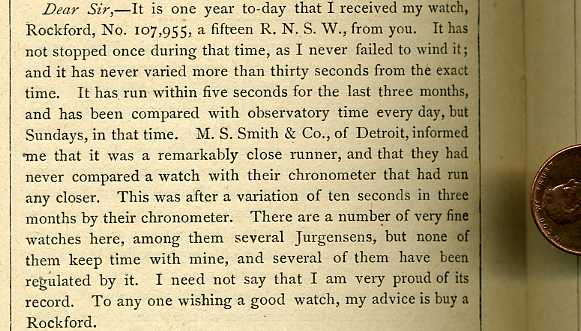 S/n 107913, an example of a late model 2 "15 R" movement. Note the closeness in number to the one mentioned above. Note the flat hairspring. 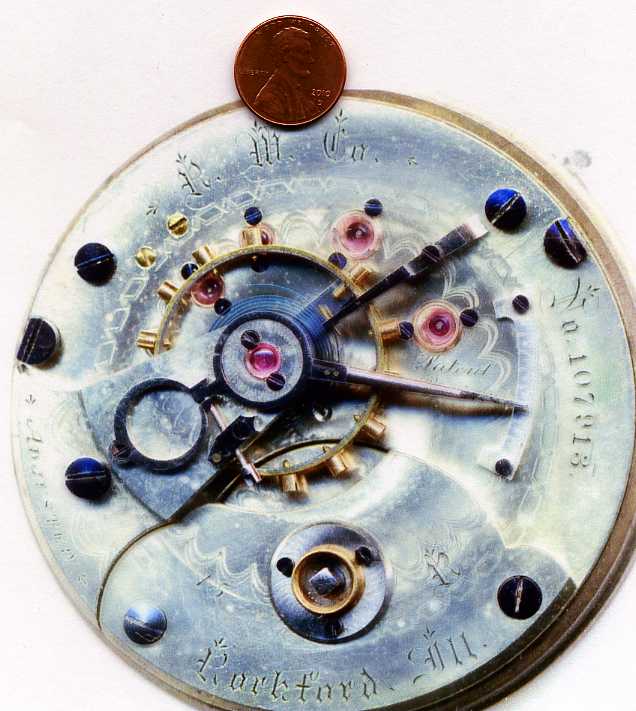 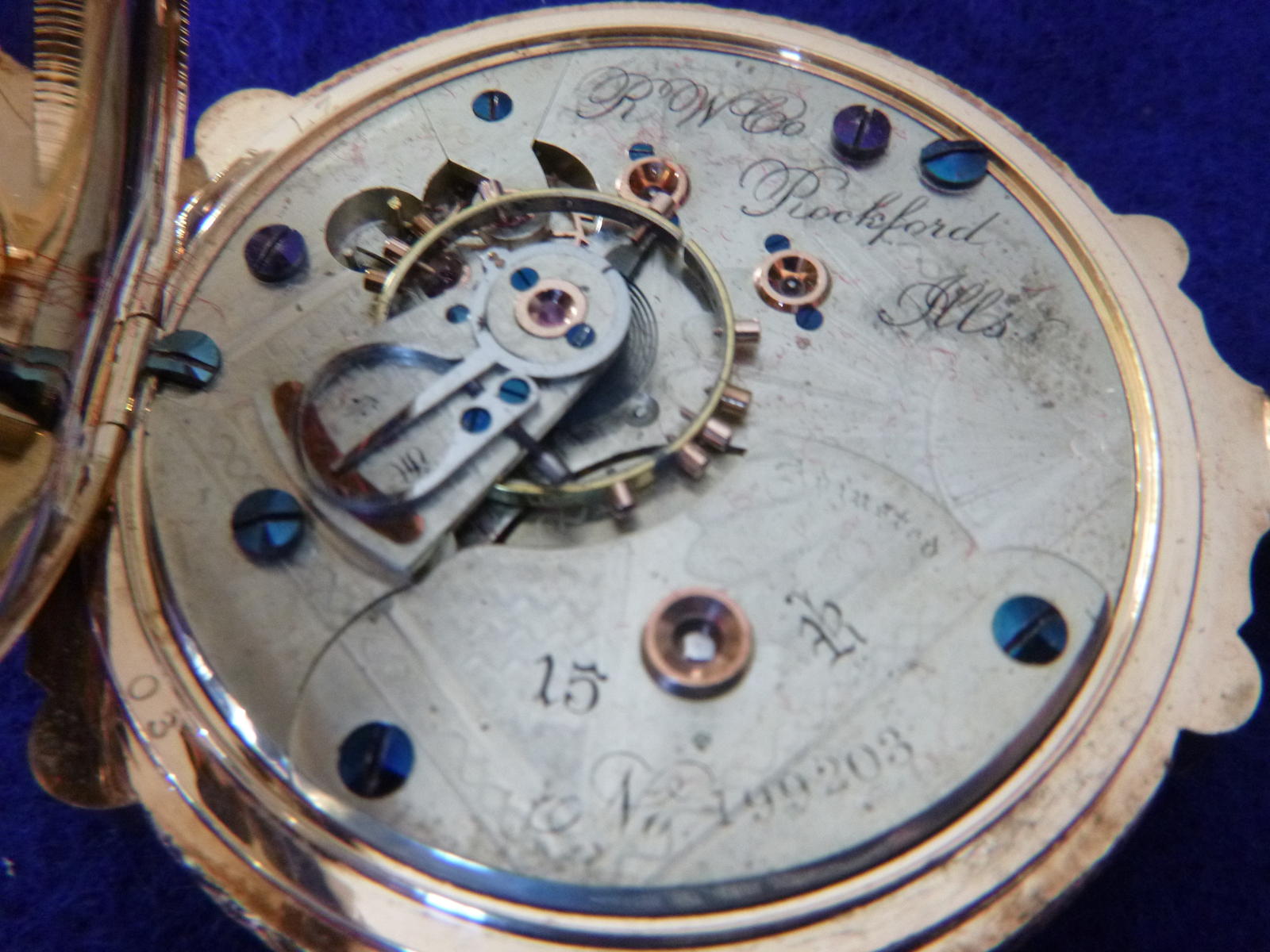 The model 6 is also known as the "exposed" or "open" escapement model since the action of the fork and escape wheel are visible. This particular example is a rare variant in that it has a large gold bushing for the barrel arbor. 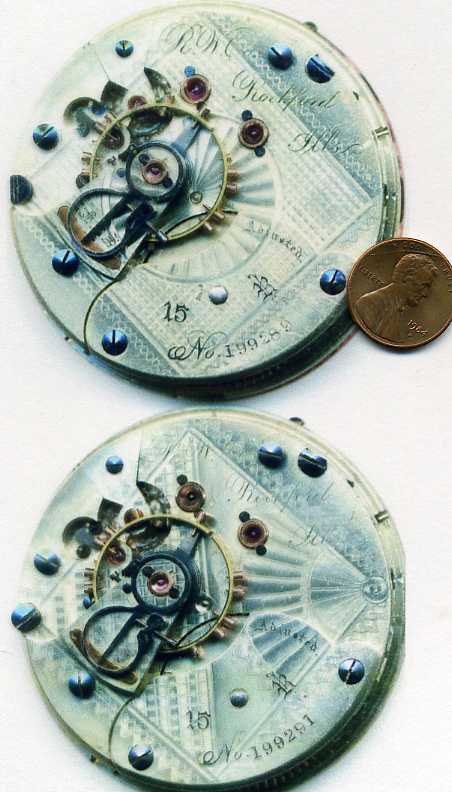 Except for the model 1, which is a pure key winder, all Rockford models had provision for stem-winding. A variety of different winding/setting mechanisms are known for the 18 size movements and some are illustrated below. 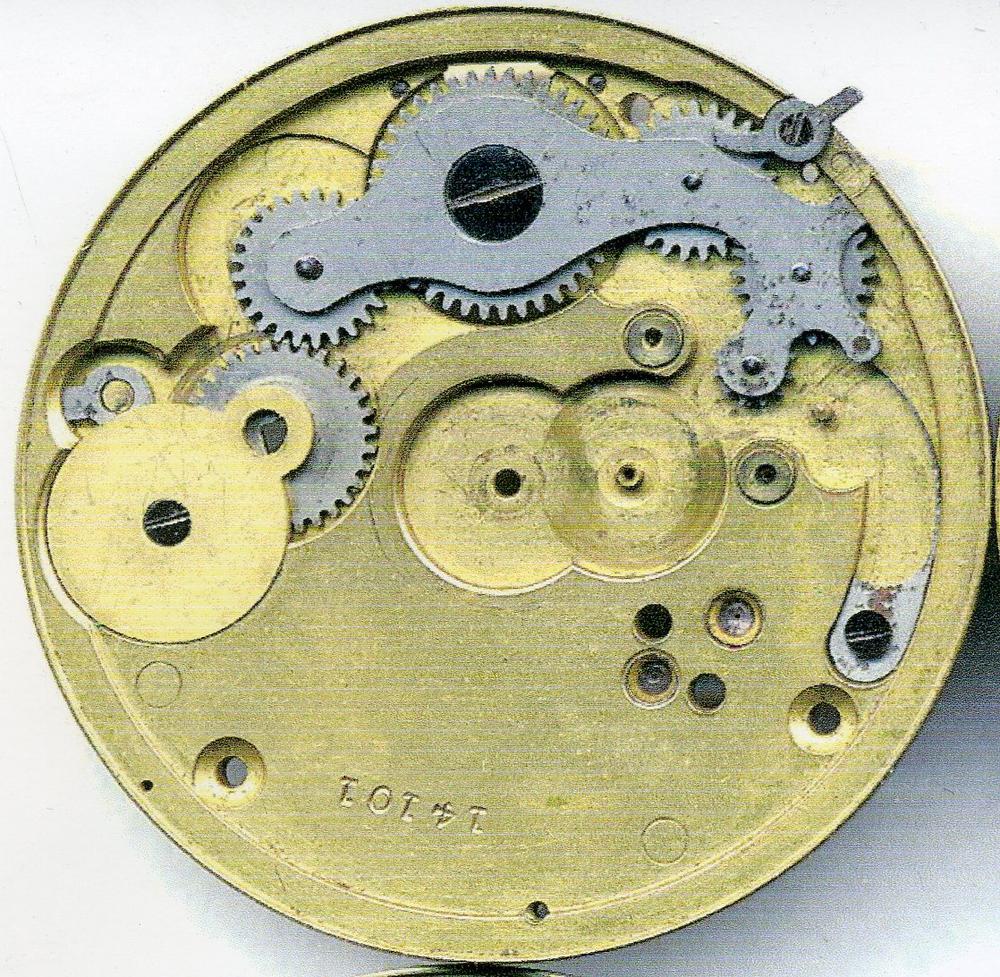 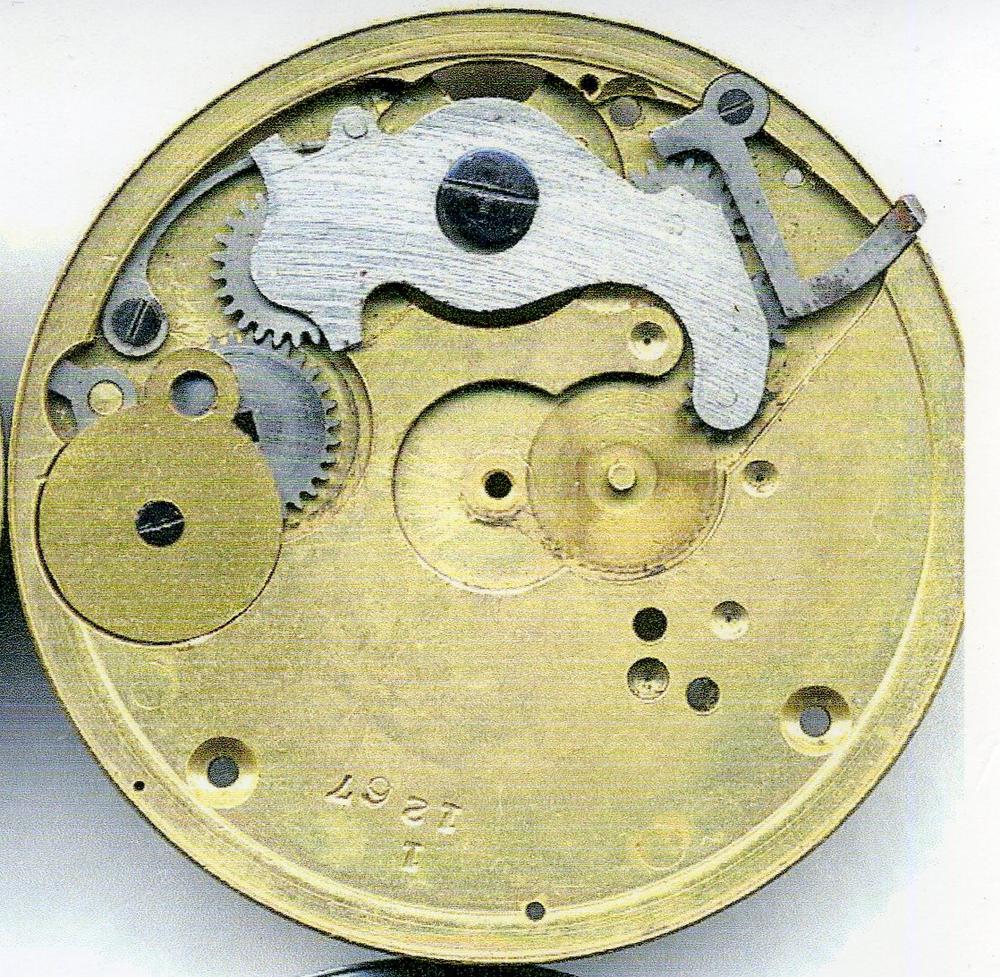 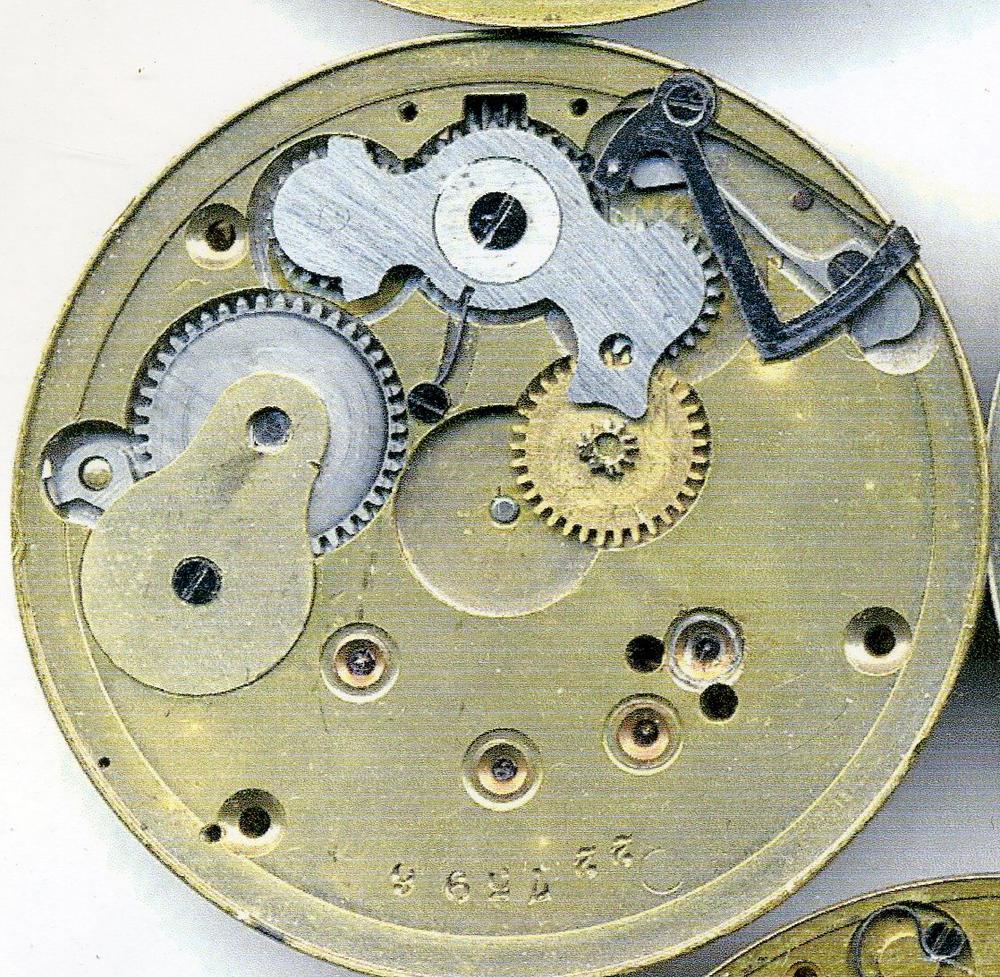 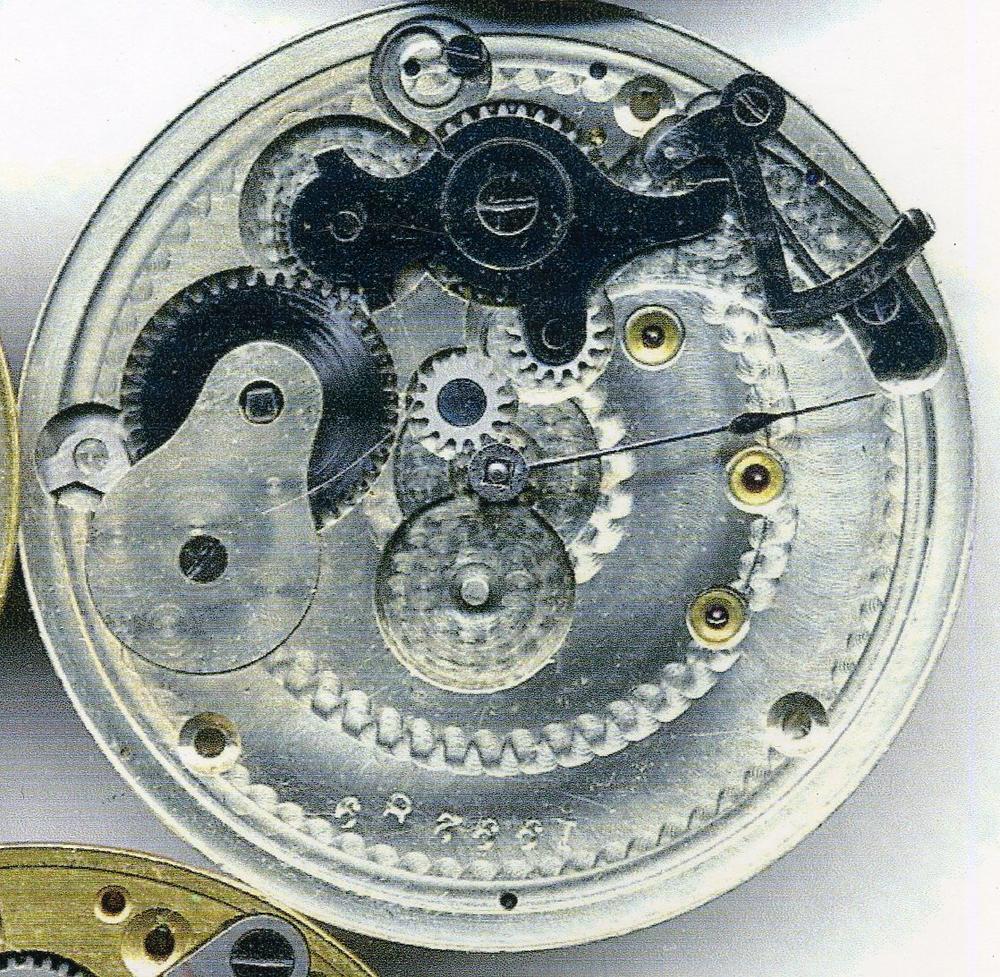 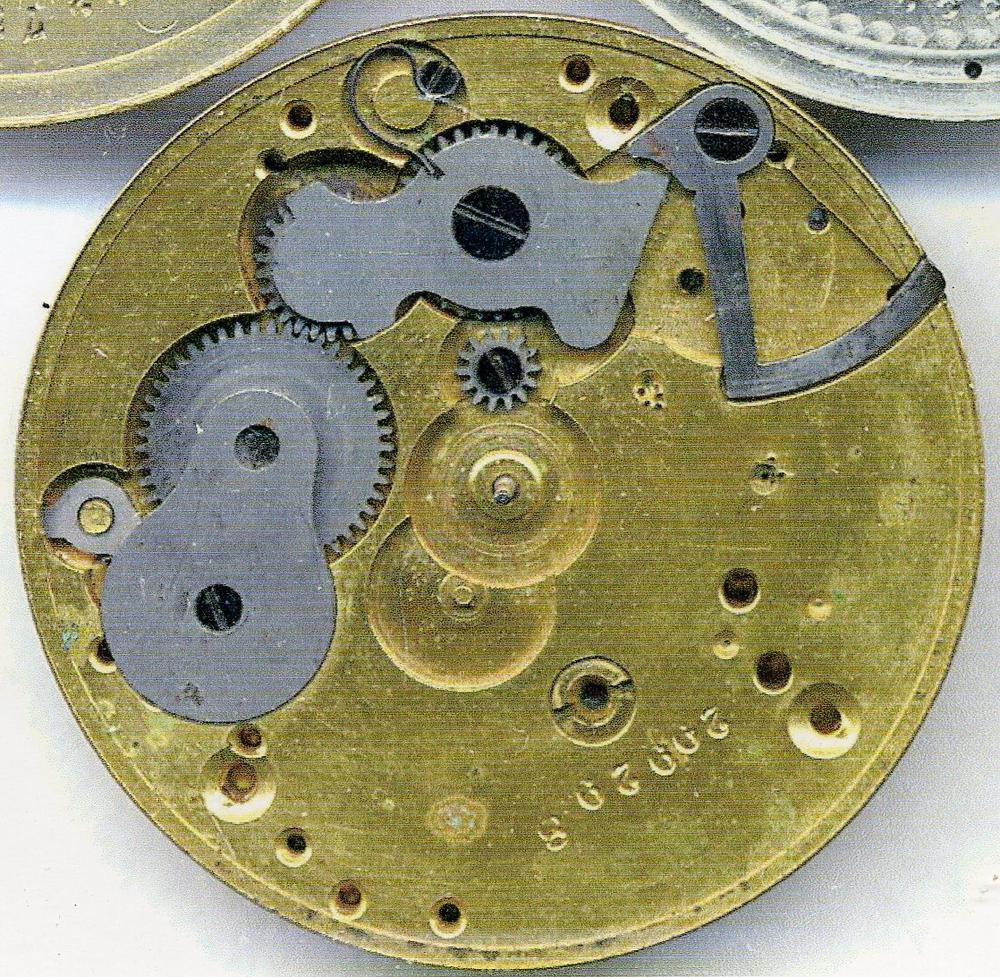 Another winding/setting mechanism variant on s/n 33470 (either a model 2 or 3, the mvt isn't handy to check). 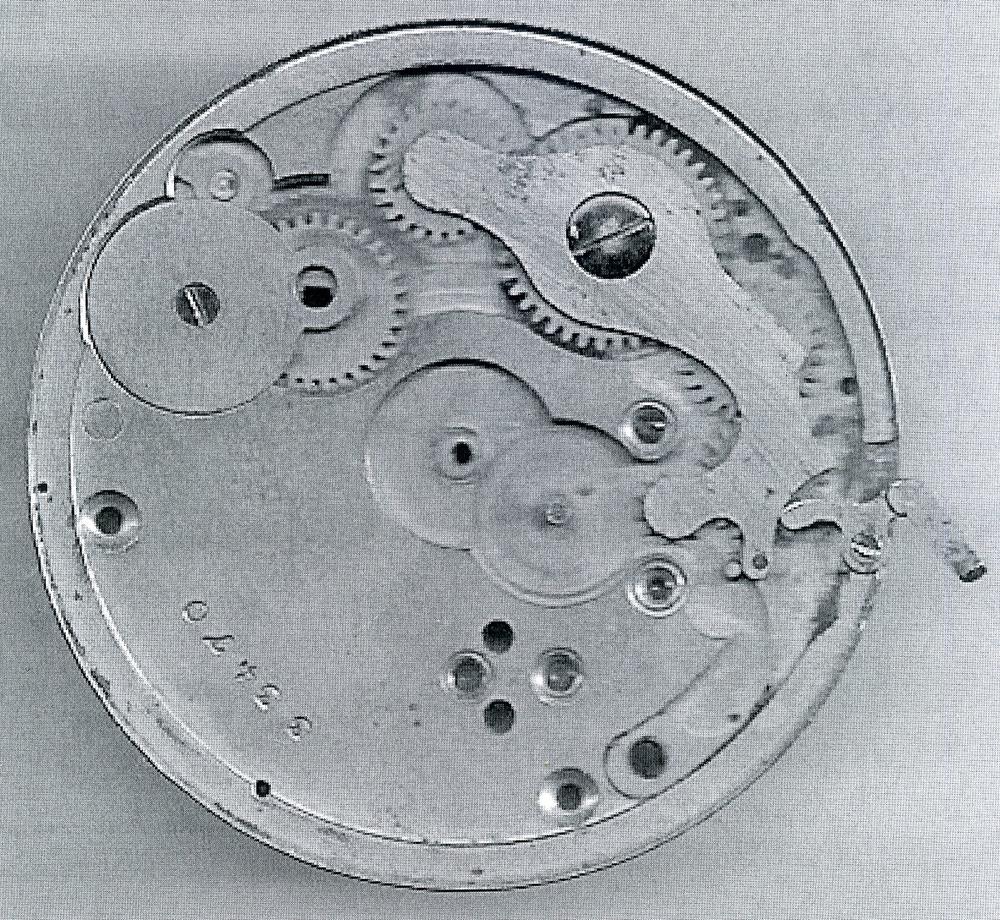 S/n 194617, an example of a model 4 "15 R" movement. The model 4 was Rockford's first open-face (winds at 12) one. All previous stem-wind 18 size models (2, 3, 5 and 6) wound at 3 o'clock and so were hunting ones (although in the early years Rockford did not actually call them such, there were simply referred to as stem-winders). Note the Breguet hairpsring. 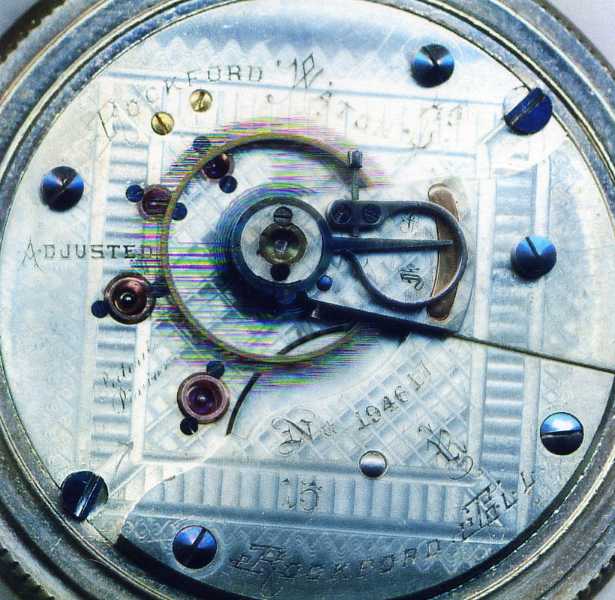 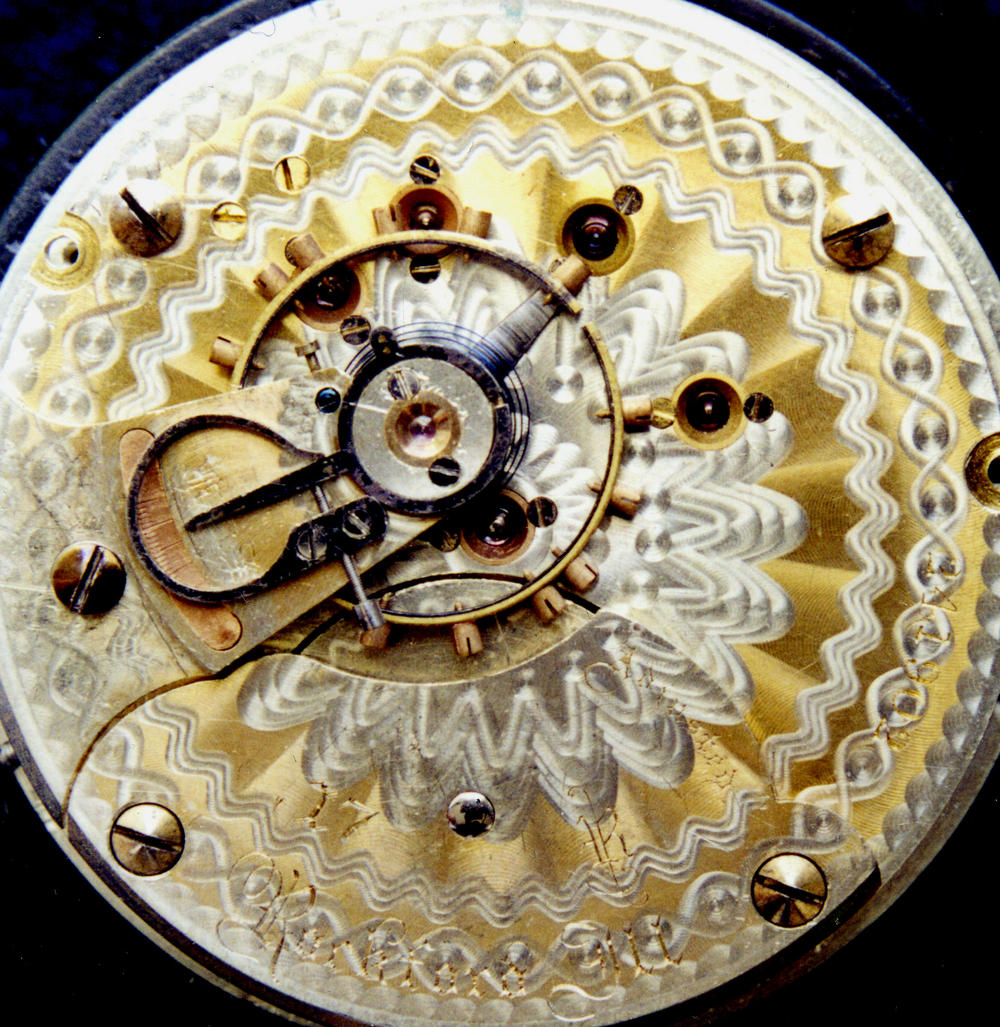 In 1888 Rockford introduced their Model of 1888, which later came to be designated as the models 7 (open face) and 8 (hunting). However, so far is known, they did not make any "15 R" or similarly marked movements in these models. But they did make two 17 jewel grades that were at the top of their line for the time, vis, the open face no. 60 and its hunting equivalent no. 80. (As an aside, things like 21 jewel and 24 jewel Rockford movements did not come into being until after the Company was reorganized c. 1899. For their time (early 1890s) the nos. 60 and 80 were indeed Rockford's highest and finest grade movements.) Important note: the 17 jewel grade nos. 60 and 80 are not marked "17 R" but rather "17 J". Since the marking "17 J" was used on other grades as well this alone does not uniquely identify movements as being a no. 60 or 80.

Shipping tin for a Model of 1888 movement: 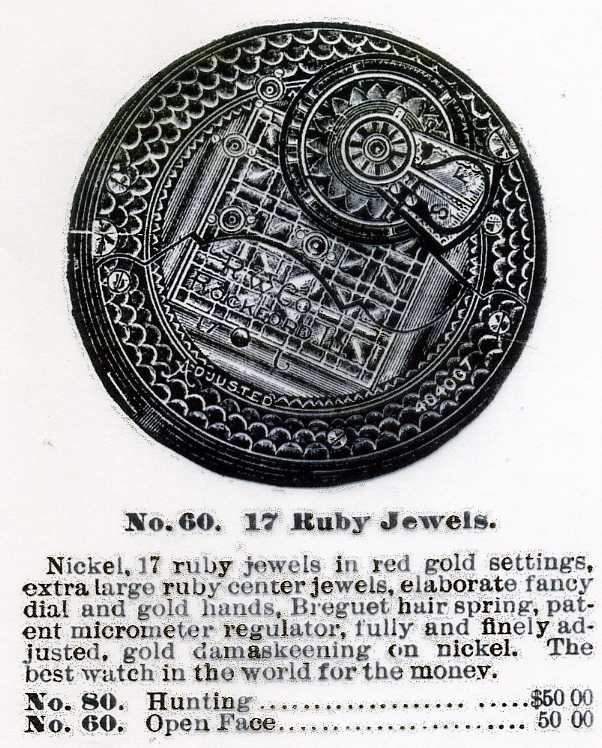 Grade nos. 60 and 80 were advertised to have elaborate fancy dials. Here is an example of one: 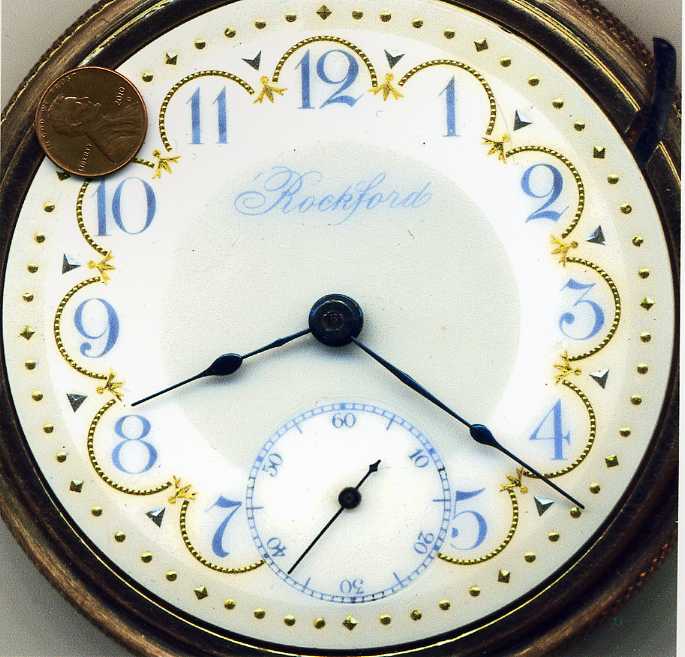