Over the years I have owned a # of watch hutches or holders. Tonight, I thought I would post a holder recently acquired, see if anyone could help identify its iconography, and finally, to request some info about a pocket watch I have owned for years and now display in said holder. I have many pix which may exceed the limit for one posting so I will add another. 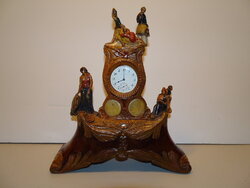 The dimensions, roughly, are 9 1/2 inches tall by 8 1/2 inches at the widest part. I was told it was carved from Circassian walnut. I thought fruit wood. I'm not the best when it comes to the identification of wood species. I do believe it is Continental.

Here are the figures on top: 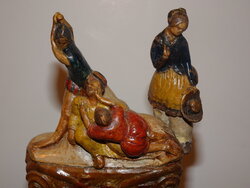 The guy with his arms raised I believe was holding a raised sword, now lost. I think he was about to kill the guy being restrained by the other figure in red while the young lady looks away! What I found interesting about the young lady is that she is dressed as a Bloomer Girl. See this:

This was a style of female dress which started in Europe and would become popular in the 1850's which I believe helps to "date" the holder. The name comes from a one Amelia Bloomer who advocated the style as reaction against the traditional physically restrictive styles prescribed for women of the time. As best as I can tell from my research, it was their equivalent of the bra burning of the late 1960's - early 1970's. Read the article.

Here is the figure on the viewer's left base: 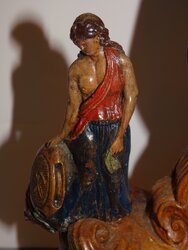 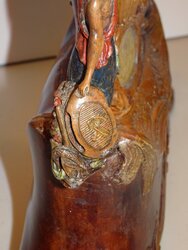 Sorry about the shadow. I believe it is an allegorical figure. There is a shovel and tools are depicted on her shield with some sort of vegetation (?) in her other hand.

Here are the figures on the other side of the base: 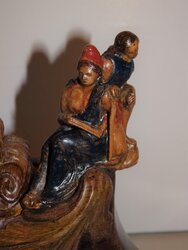 Another what I believe is an allegorical figure, wearing a Phrygian cap (a symbol of revolution or liberty; in France during the Revolution, a red Phrygian cap was called the bonnet rouge) holding a book and a man kneeling with a sword.

Finally, there are what I believe are wax or composition medallions depicting people I don't recognize below which are carved clasped hands which can have a number of meanings. These include heavenly welcome, an earthly farewell, simple unity, or friendship. It is also an Odd Fellows symbol: 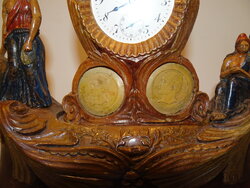 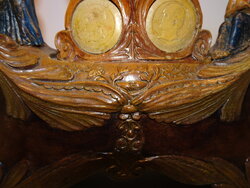 Now, one bad thing about watch holders. Once the watch is removed, it leaves an empty space or basically a dark hole which makes the hutch less decorative. So, now, here is what makes this holder "cunning" as they might say in Maine. Here's the back: 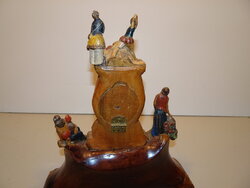 To remove the watch, one opens the little door to which is attached a rather crude coiled spring. That in turn holds a wooden disk in place which retains the watch. The face of the disk is decoratively carved, so once the watch is removed so that it may accompany its owner, this is what one sees: 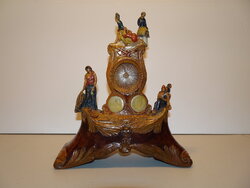 A sunburst pattern rather than an empty hole. Never saw anything like that before.

Any comments or thoughts on the hutch are most welcome. Appears to me to be a rather personal thing with a combination of symbols that were meaningful to someone. Not sure how to put it all together.

I will post another reply below about the watch as I am afraid, I will exceed the picture limit.

Well, here's the watch part. What I know about watches wouldn't fill a thimble, so any info and if possible, valuation, would be appreciated. Yes, I realize it might be total boring junk. Please say so if that's the case. 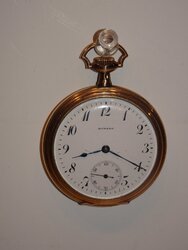 The porcelain dial is signed "Howard". Same company that made the clocks? The dial is free of hairlines. Has a sunken subsidiary dial for seconds. Crystal has a scratch. Guess this is called an "open face" watch? Hey, I'm a clock guy.

Gold colored case. Here's the markings on the case that I can find: 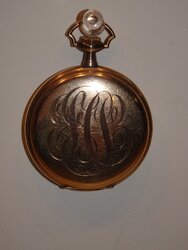 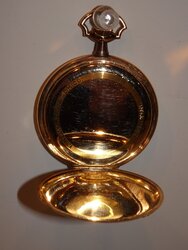 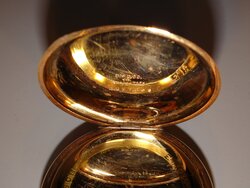 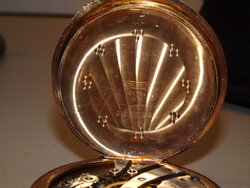 Finally, the movement with serial #. Is a jeweled movement: 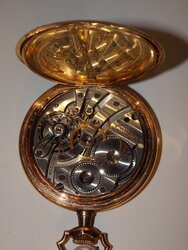 Information, any sense of value, if any, would be much appreciated.

The fellow on top raising his arm could be dressed in 16th century costume, with padded hose, (not, I think, the much later bloomers). Could this upper group of figures be a reference to the Saint Bartholemew's Day Massacre of French Huguenots in August 1572? The Phrygian cap lower right places us later, during the French Revolution, so a wide timespan for these alegories.

The watch is a Keystone-Howard. E. Howard Watch Co. (Keystone) Pocket Watch: Serial Number 1130727 (Grade Series 7) (pocketwatchdatabase.com) (Note the caveat at the top of the screen.)

The fellow on top raising his arm could be dressed in 16th century costume, with padded hose, (not, I think, the much later bloomers). Could this upper group of figures be a reference to the Saint Bartholemew's Day Massacre of French Huguenots in August 1572? The Phrygian cap lower right places us later, during the French Revolution, so a wide timespan for these alegories.

Will have to pursue this a bit.