shows a Waltham “railroader” dial..... can anyone tell me the correct time period for this dial and possible movement dial configurations for it? Thank you
Last edited by a moderator: May 8, 2021

Just off of the top of my head, without any checking and just based on my impressions from seeing and recording notes on tens of thousands of watches:

I don't have a copy of the 2018 edition of the book, so I don't know exactly to what you are referring. Waltham's "Railroader" dial has always meant to me the general of the dial shown below. It has appeared bearing the "Waltham" signature without "Railroader" and has also carried private label watch names (I think). I only remember seeing them on 18-size watches, but I wouldn't be surprised to see one on a 16-size movement.

I don't recall seeing it on model 1892 movements, but it may have been made for those as well. Again, it would have appeared on the railroad grade movements: Vanguard, Crescent St.; Appleton, Tracy & Co.; and maybe the Non-Magnetic No. 45. I think that the grade No. 845 was introduced a little late for the Railroader dial. I recall seeing it in Waltham's 1909 material catalog.
B

Thanx guys, that’s what I was looking for..... I’ll post again on this thread in a few days with some more info

As Greg notes, the “Rail Road” dial was shown in Waltham’s 1909 material catalogs (and also the 1911 catalog). It is shown in five styles: bold Roman numerals (with and without marginal 5-minute numerals), heavy Arabic numerals (with and without marginal 5-minute numerals) and heavy Arabic with a 13-24 inner track. The first four were available single-sunk or double-sunk, the 24-hour was only single-sunk. All varieties were offered for 16 or 18-size models (presumably including the ’92 model).
Toggle signature
Jerry Treiman, NAWCC member since 1971
Member of Ventura-Santa Barbara Chapter 190

Kent, if you have one Price Guide it's all that's necessary IMHO. My 2008 has
not changed much from my 2015 Price Guide.

Keith, you might have mixed the dates on those books.
B

I can confirm that it was made for the ‘92 model as I have two of them, one as pictured but without the “railroader” and the other is a 24 hour dial.

I also have it on a 92, without the railroader heading
Bill

I have several of these dial in all forms mentioned but none of them include the "RailRoader" on it. Didnt know they were produced until now.
W According to the lookup http://nawccinfo.nawcc.org/LookupSN.php there was a Railroader grade in models 1888, 1892 and 1899.

Kudos points to anyone who has completed the set, particularly if they are all wearing Railroader dials.

These are not only interesting dials, but they are often on very interesting movements. Can you share movement photos with us as well? Many of the ’92 model Railroaders have a pinwheel damaskeening pattern. But there is also an interesting assortment of Walthams that have an off-center circular pattern, and many of these have dials similar to your third example. One characteristic of this dial is having dots at the 5-minute marks and simple lines at the minutes. I wonder if these might have been requested by a particular jobber. 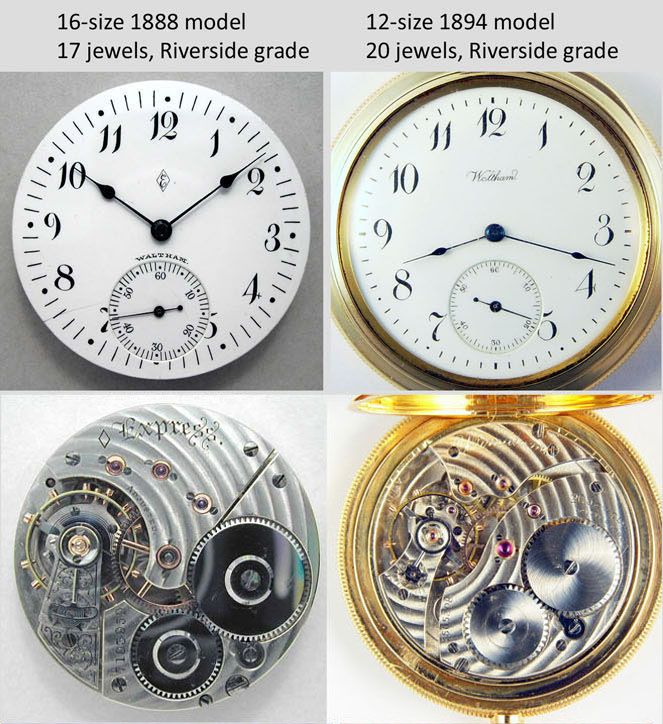 Jerry, am I correct that the Diamond Express was for Eatons?

179 said:
Jerry, am I correct that the Diamond Express was for Eatons?
Click to expand...

I do not believe it had anything to do with Eaton's Department Stores, despite the similar emblem on the dial. Eaton's used a simple "E" rather than the script E used here.

My brother, Larry (whose watch this is), thought it possible that the watch marking was related to the "Black Diamond Express" - the flagship passenger train of the Lehigh Valley Railroad.
Toggle signature
Jerry Treiman, NAWCC member since 1971
Member of Ventura-Santa Barbara Chapter 190
W Thanks for showing the movements. All of the 1892-model Railroaders that I have seen have the pinwheel damaskeen pattern. However, I have seen a 16-size Railroader, and also a Roadmaster, which have the off-center circular damaskeening like I show in post #14, above.
Toggle signature
Jerry Treiman, NAWCC member since 1971
Member of Ventura-Santa Barbara Chapter 190
You must log in or register to reply here.
Share:
Facebook Twitter Reddit Pinterest Tumblr WhatsApp Email Link