Use of Separate Dial Plates?

I'm curious, please could anyone tell me when makers started using separate dial plates like the one photographed?

Are these original to watches? Or were they just a convenient method of attaching replacement dials?

I would appreciate any insight you could provide. 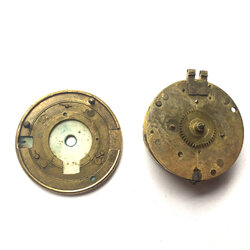 These are also known as 'brass edges' and are original where fitted. They were used from very early on, some long time before balance springs were introduced, and continued in use during the 18th century and into the 19th. They provided adequate space for the motion work and other under-dial fittings, reinforced the dials, often had the case joint fitted to them, and did indeed make dial replacement easier. On champlevé dials, they retained the separate central reserve. Eventually, they were superseded by dials fitted directly to the pillar plate, which was hollowed out to clear the motion work; these are known as 'hollow-back' movements and were clearly cheaper to make.