I was following an early French Portico clock at an auction recently by Lepine. A very fine quality early clock. I've attached a picture of the dial for opinions. It has a combination of Arabic and Roman numerals. Anyone out there ever see this application before? Any explanation or opinion? Thanks That is odd. With clocks you never know what you might see next! Willie X
Z

It’s not that unusual with older French clocks. One set of numbers for the hours, the other for the minutes..
Toggle signature
If you have benefited from the discussion here on the NAWCC forum, please consider joining the NAWCC, or donating to the message board
Reactions: Jmeechie

Nice looking clock. While plenty used Arabic numerals for the minutes and Roman for the hours I don't recall ever seeing one that mixed Arabic and Roman numerals or used both together (X2) for the hours.
Toggle signature
Jonathan.
Z

Didn’t notice the X2/V2 first time around.. there are lots of dials with 24 hour and minute notations, but haven’t seen that before.. Maybe just after the 10 hour revolutionary dials they experimented a bit…
Toggle signature
If you have benefited from the discussion here on the NAWCC forum, please consider joining the NAWCC, or donating to the message board

Hey guys, I just paid for that clock. When I eventually receive the clock I will take more pics. Hopefully it will get here undamaged

which it should.
It's a signature dial by Lepine. Robert (rstl99) wrote articles for the NAWCC Bulletin in 2019 referencing Lepine. Also Wringham had posted another Lepine clock a month or 2 ago.

A beautiful clock that I was watching closely. I read that Lépine developed this dial, apparently the numeral 1 was circled to create balance with the numeral 11. With the other numbers, the overall effect is great. I've only seen this dial on a watch, I am linking an example to one at the British Museum dated 1788. Their description of the watch describes the dial as well. 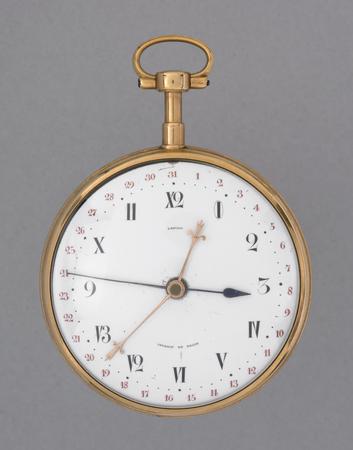 Took me a little while, here's one. 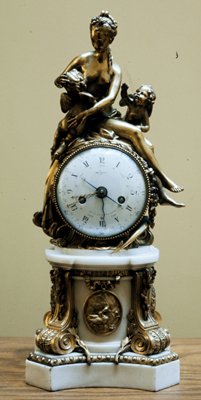 Well I really don't know much about the maker. The dial is signed Horologer Du Roi.

watch-wiki.org
So the example in the above link, says he took the title Horologer Du Roi after forming a partnership with Claude-Pierre Raguet in 1792. Which would suggest to OP clock was post 1792.


https://www.invaluable.com/auction-lot/lepine,-horloger-de-l-imperatice,-paris,-height-6-208-c-7514455a2f
But reading the "item overview" in the above link, it says Lepine was Horologer Du Roi after 1784.

So it is likely the OP clock dates to the late 18th c.

I will have to read Robert's NAWCC articles.
But apparently, the dial is Lepine doing something aesthetically different to be more interesting.
The OP clock looks like it has an unusual pendulum suspension. So I wonder what type of escapement the clock has.

Interesting Dial! It almost strikes me as we were trying to design a new way of dial numbering? Numbers 7, 8 and 12 are half Roman and half Arabic in the Roman style yet 4, 5 are completely Roman and 9 is Arabic and upside down in comparison to the other numerals!
Its almost as if we were showing dial design capabilities, a visual catalog, or what could be applied to a dial? The dial seems to be broken down into 1/4’s 1st Arabic, 2nd Roman, 3rd hybrid addition?, 4th hybrid ? The 9 is the odd one as the dial is also broken into upper and lower half as 9 through 3 are heads out and 4 through 8 are bottoms out! Imagine the confusion of 6 and nine if it was all Arabic with 6 bottom out and 9 head out! You’d have 6 o’clock 4 times a day!
Anyway, just my thoughts and a defiantly unique dial!
Cheers,
James
L

To me, it looks to be a purely aesthetically-driven venture to achieve symmetry in weight for visual balance. (The "I" needed more weight, and so the oval surrounding it.)

Worth noting that makers would typically have bought dials in as opposed to making their own.

Lepine was maker to Louis XV 1756, then Louis XVI and later Napoleon (I). After the revolution of 1789 nobody would have used the title Horloger du Roi for obvious reasons though I don't know when it was resurrected.
Toggle signature
Jonathan.
L

jmclaugh said:
Worth noting that makers would typically have bought dials in as opposed to making their own.

Lépine was maker to Louis XV 1756, then Louis XVI and later Napoleon (I). After the revolution of 1789 nobody would have used the title Horloger du Roi for obvious reasons though I don't know when it was resurrected.
Click to expand...

There is a current auction for a clock with similar mixed numbering - "... the Arabic and Roman numerals designed by Lépine and the dial enameled by Joseph Coteau." ... "Begun in September 1774 (according to an inscription on a spring), it was delivered around 1789-1790, during the Revolution, after the words "du roy" were deleted from Lépine’s dial—an ominous sign considering what became of Louis XVI, the clockmaker king."

Lépine... transferred his business several times until 1789 when it moved to 12 Place des Victoires. By this time the running of the business was in the hands of his son-in-law, Claude-Pierre Raguet-Lépine (1753-1810), who had joined Lépine in 1783. Joseph Coteau who was known as a leading enamellist and creator of the finest French clocks - intricate enamel work and detail were a characteristic feature of his work; he is responsible for the moon phases and signs of the zodiac on this clock.
[Jean Antoine Lépine (1720-1814) - Mantel clock]

Joseph Coteau (1740-1801) - The most renowned enameler of his time, he worked with most of the best contemporary Parisian clockmakers...[/url]
Reactions: Ralph

The most celebrated French dial enamelers of this period were Coteau, Merlet and Dubuisson. One source mentions a dial for a decimal clock by the latter which displayed decimal and normal time.
Toggle signature
Jonathan.

. I didn't have an 18th c. pendule de Paris movement, and this is a good one. Movement plates are 5" in diameter. The escapement is a type of dead beat, the teeth resemble a Brocot. The pendulum bob is filled with small sized shot. Looks like a keeper.
Sorry the pics were taken in the garage, we have a bit of rain today. Very nice. I assume the pendulum is a properly compensated one, not just for show
Toggle signature
If you have benefited from the discussion here on the NAWCC forum, please consider joining the NAWCC, or donating to the message board

Chris,
Lovely clock by the firm of one of the French masters from the second part of the 18th century.

Jean-Antoine Lépine experimented with a lot of things during his horological career, especially once he took over the business from his father-in-law André-Charles Caron (you can see the articles I wrote for NAWCC on my website below). Certainly in watch design but also in clocks, Jean-Antoine kept trying different ideas, such as the rather interesting way he used the combination of roman and arabic numbers for the hours in a dial such as is on your clock. Almost too clever perhaps, and it obviously didn't catch on with other horologists, but it certainly identified a clock by him, if his name on the dial wasn't enough.

For fun, I put a picture of your Lépine clock (ca. late 1780's?) with one I myself recently acquired by Cronier l'Ainé (ca. 1810). Both feature very similar wood veneer case with four pillars, and a "Berthoud-style" pendulum. I read somewhere that some French clocks from that era, because of a war with the English that was going on, resorted to the use of more domestic woods, because of lack of supply of mahogany and other tropical woods normally coming from England. And also using wood because of a lack of brass, again related to the war apparently.

Anyway, they make an attractive pair side by side. Toggle signature
(To all horological friends in the UK, US, Canada and elsewhere, stay safe and keep healthy in this dreaded epidemic. Our cherished old clocks and watches have survived such calamities in the past, let's hope we all survive this one...)
www.timetales.ca (my humble research/writing on antique horology)​
Reactions: aucaj and Chris Radano
You must log in or register to reply here.
Share:
Facebook Twitter Reddit Pinterest Tumblr WhatsApp Email Link
Know Your NAWCC Forums Rules!
RULES & GUIDELINES