I have researched chime clocks for over 10 years and am proud to have gotten so far, not only in learning more about clocks but how to repair them and tune rod chimes to match original sets. There are several Westminsters, Whittingtons, Trinitys, and Ave Marias, but some chimes I've run across in research are fairly strange. The stuff that makes one wonder 'Who wanted this on a clock?'. So here's a brief look at some of the strange chimes that turn up once in a blue moon. I've considered writing an updated and more complete bulletin article documenting the assortment of chime melodies but thought I'd post a "teaser' here first to see if there was any interest. It's inevitable and a bit disappointing that most American households stick their multi-melody chiming clocks on 'Westminster' and forget about everything else. There are many interesting, strange chimes that haven't been formally documented in any written publication and older articles often made significant errors or missed several melodies altogether. The current videos are on YouTube, courtesy of other collectors and shops who handle these clocks by the truckload.

For the bicentennial, S. LaRose ordered a small number of special Hermle movements which play Yankee Doodle Dandy over the hours instead of Westminster. They were not complete clocks but buildup kits a craftsman could make into a complete clock. Because of this, it's impossible to tell a Yankee Doodle donger from a Westminster bonger unless you look inside or play the chimes.

A special order for the Emperor Clock Company following the University of Alabama's win at the 1992 National Championships (FOOTBALL). Using a Kieninger KSU 'Concerto' movement in an Emperor case, there is virtually no catalogued reference for this model and does not appear to have been produced in large numbers.
The football story is best summarized here:

Alabama's 1992 national champions: Where are they now?

Twenty-five years ago this week, Alabama beat heavily favored Miami 34-13 in the 1993 Sugar Bowl. The victory capped a 13-0 season for coach Gene Stallings' team, and handed the Crimson Tide its first national championship of the post-Bryant era.

Skip to 6:52 for the quarter hour ding-dong, leading up to the Alabama chime:


We are fortunate that no one has called orders for a clock playing 'On Wisconsin'.

Vedette clocks are more familiar in France, Vietnam, Brazil, but rarely seen in the United States. This was a Vedette exclusive and is fairly populous compared to the other chimes showcased in this thread. Patented in 1930, the purpose was to have an alternative chime besides Westminster and Ave Maria. Why not make up another tune such as Cloches du Fromage? These clocks often hung around in family households foyers and young children would occupy the same room as the clock. As the Frere Jacques was a familiar nursery rhyme, it found instant appeal as a clock chime.


Registration for the original patent:

Courtesy of Denis R. is an older Vedette brochure illustrating a tyke next to a clock, other scenery where a clock was traditionally mounted:

Not an original production chime but the work of a Vietnamese machinist. The chime clock trade is strong in Vietnam and the idea of making a clock play this traditional Vietnamese folk song eventually took off. While modification of existing clocks is frequently debated, there are thousands of these clocks in Vietnam, France, Brazil, leaving no shortage in sight. While the majority of these clocks trundle along unmodified, there's always a chance that new production clocks in Vietnam may someday play this tune.

Written by Messrs. Smith & Son of Derby as a clock tower chime, this tune has also been referred to as the 'Carfax' chime. Its entire history and score can be read in the Musical Times, which details the chime's origin quite handily:

Proceedings of the Musical Association

For me, the nicest chime is the Gai Carillon in French Odo wall clocks (qv Youtube).
Unlike nearly chiming clocks it doesn't use the chime barrel twice during an hour's running.
Toggle signature
Mike - banned member of the throwaway society.

You'd have to go to Vietnam, where ODO clocks are well renowned and the Gai Carillon chime is popular. ODO had a longstanding market in Vietnam when it was known as French Indochina. They even had a factory which has seen a recent resurgence under independent ownership - new cases are being made to replace those wrecked by woodworm. Nowadays there's more interest in ODO amongst Vietnamese collectors than there is anywhere else.

And now: the Gai Carillon chime!

This is a rare melody.
Can’t wait to see the document! I will gladly contribute if needed.
Toggle signature
"Just. For. The. CHIMES." - Calvin H. H
​
Reactions: bkrownd and J. A. Olson

I consider the Ma Normandië to have one of the greatest note articulation for a chime rod wall clock. Still looking for one.
This - more popular but still depressing and stunning as heck. Here are all the interesting clock videos I’ve collected ever since: https://m.youtube.com/playlist?list=PLmzt_ZBoWQZPhNB6BW6QmV2Hkxwz9h4lP
Toggle signature
"Just. For. The. CHIMES." - Calvin H. H
​
Reactions: bkrownd
M

Calvin H. Huynh said:
"I consider the Ma Normandië to have one of the greatest note articulation for a chime rod wall clock. Still looking for one."
Click to expand...

I have asked a close Vietnamese friend of mine to look into it. Perhaps they are best located in Vietnam since it sounds like that is the place where they were originally sold.

It is interesting - reading about the tune "Ma Normandie" on-line. A French tune that became the regional anthem for the Bailiwick of Jersey under the British crown for a while.
But, it seems, the Vietnamese were more fond of this than the French. I have not come across any clocks in Europe with the "Ma Normandie" tune.
(Yet.)
Reactions: Calvin H. Huynh
K

I couldn't buy the fact my ODO I acquired had strange chimes. It took me nearly three hours, but like a puzzle, I figured it out. The barrel pin plates were out of sequence. This made for a very strange tune. I stuck with the fact it was supposed to be Westminster, because the dial said so. Once the positions were corrected, it has a beautiful Westminster medley.
Last edited: May 27, 2022
Reactions: Calvin H. Huynh

ODO clocks are renowned for their great quality chimes. They also boasted a substantial variety of chime melodies. 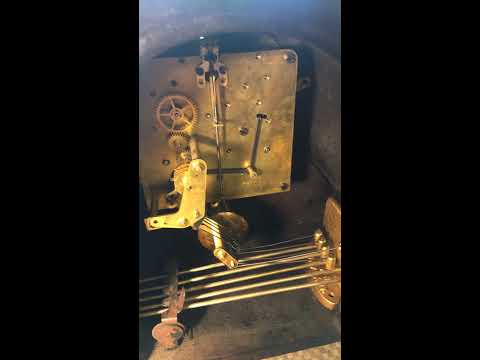