19th c The best surprise is the "ENTERPRISE"

I have to thank Andrew Demeter's article Clocks of the Ironclads ... from the previous NAWCC bulletin (September | October 2017 • NAWCC Watch & Clock Bulletin) , I read it years ago and then when I saw the clock I knew it was something to review... and wanted to thank the NAWCC and share it here as well.

The best surprise is the "ENTERPRISE" E. Howard Marine Clock

Hello Everyone I wanted to share a big discovery with you ….. Over the course of my many collecting “things" journey. You just never know what you...

Bill
Reactions: Ralph and PatH
B

Hello
I got a PM from a member asking me to post a copy of the article here... a few pics here and the rest of them are on Omega Forums.

Hello Everyone
I wanted to share a big discovery with you ….. Over the course of my many collecting "things" journey. You just never know what you might come across .. I came across this clock totally by surprise while dealing with something else . The seller said hey you collect marine clocks, how about this one ? He sent me a pic and I was "caught" . I acquired the clock , it just took time.
All I can say is the best surprise is the " ENTERPRISE" !
From my research and corroboration by others that have first hand knowledge handling these early "Beta " E Howard clocks and movements .
This clock came from the 5th USS ENTERPRISE Screw-Slope of War 1874.
It was best said by a Rededit post
" Before the evolution Revolution...." The poster was referring to the "Squadron of Evolution" from 1889...
See photo attached.
The USS ENTERPRISE had an amazing carrier …. From surveying the mouth of the Mississippi River . She later sailed on a three-year hydrographic survey that took her completely around the world. During the journey she was a neutral witness of the Battle of Fuzhouon 23 August 1884 during the Sino-French War. Enterprise was decommissioned at New York on 21 March 1886. ( source: https://en.m.wikipedia.org/wiki/USS_Enterprise_(1874))
She finished up her career as a training and practice ship at the United States Naval Academy, Annapolis, Maryland. On 17 October 1892 at Boston, she was lent to the Commonwealth of Massachusetts for duty as a school ship at the Massachusetts Maritime Academy. She had a refit in 1892 see line drawing of the ship ….. ( amazing what you can find on line sometimes!).
She was decommissioned in 1909 and finally scrapped and hull burned in 1910 .
Now back to the clock ...
This is the second post about this clock on the forum, the first one I was just asking what everyone thought of the cradle and I was thinking of changing it... I am still on the fence about changing the cradle and restoring the case...
The clock came on a primitive wooden mount , when I took it off that mount you could see it's originally " shiny " brass where the wood protected it since about 1909 when it was removed from the ship ( this is speculation on the year of removal ). But from the condition of the unexposed case it's been on that wooden mount for close to 100 years to say the least .
The clock dial is 8 1/2 inch in diameter. The front bezel is hinged to the case. with a locking finger at 54 min mark on the dial. The dial is also hinged to the case at 3 o'clock with a dial knob pull located at the 44 min mark on the dial. The movement is actually attached to the back of the dial plate and it has four sliding dust covers covering the movement. The clock runs fine and keeps time, also attaching a video of the balance in action. The movement is signed E Howard Company. Talking with Andrew Demeter he designated the movement to a "Beta " E Howard. Andrew wrote the article "Clocks of the Ironclads: "Damn the torpedoes, full speed ahead!"" ( published in September | October 2017 • NAWCC Watch & Clock Bulletin) in which Andrew documented the clock of the USS Manhattan, an Ironclad from 1865 about ten years earlier than the USS Enterprise. When I first saw the Enterprise clock , It sparked something in my head.... and then about a week later I realized it was Andy's article I read a year or so earlier. His article gave me a great starting point in looking at these early pre 1880 Marine Clocks. Wanted to thank Andrew and the NAWCC without either I might not have acquired this clock.

Well as I said before....
All we have left of these great ships 100 plus years later is maybe some photos, a bell and just maybe a clock if we are lucky.
Good Hunting
Bill 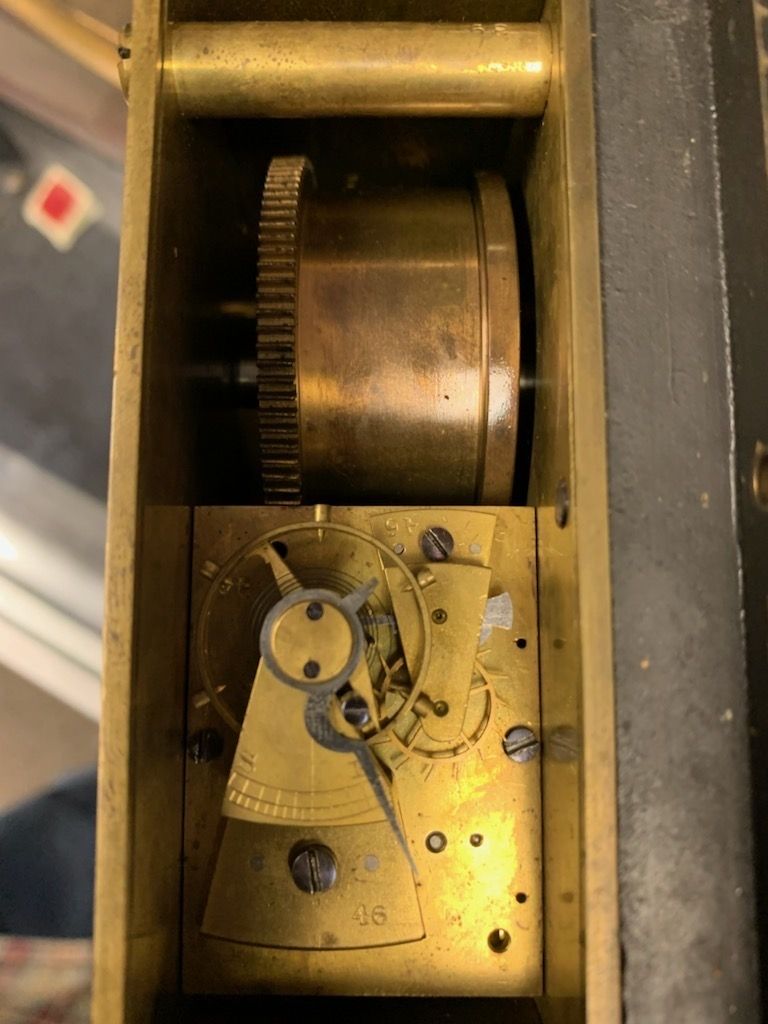 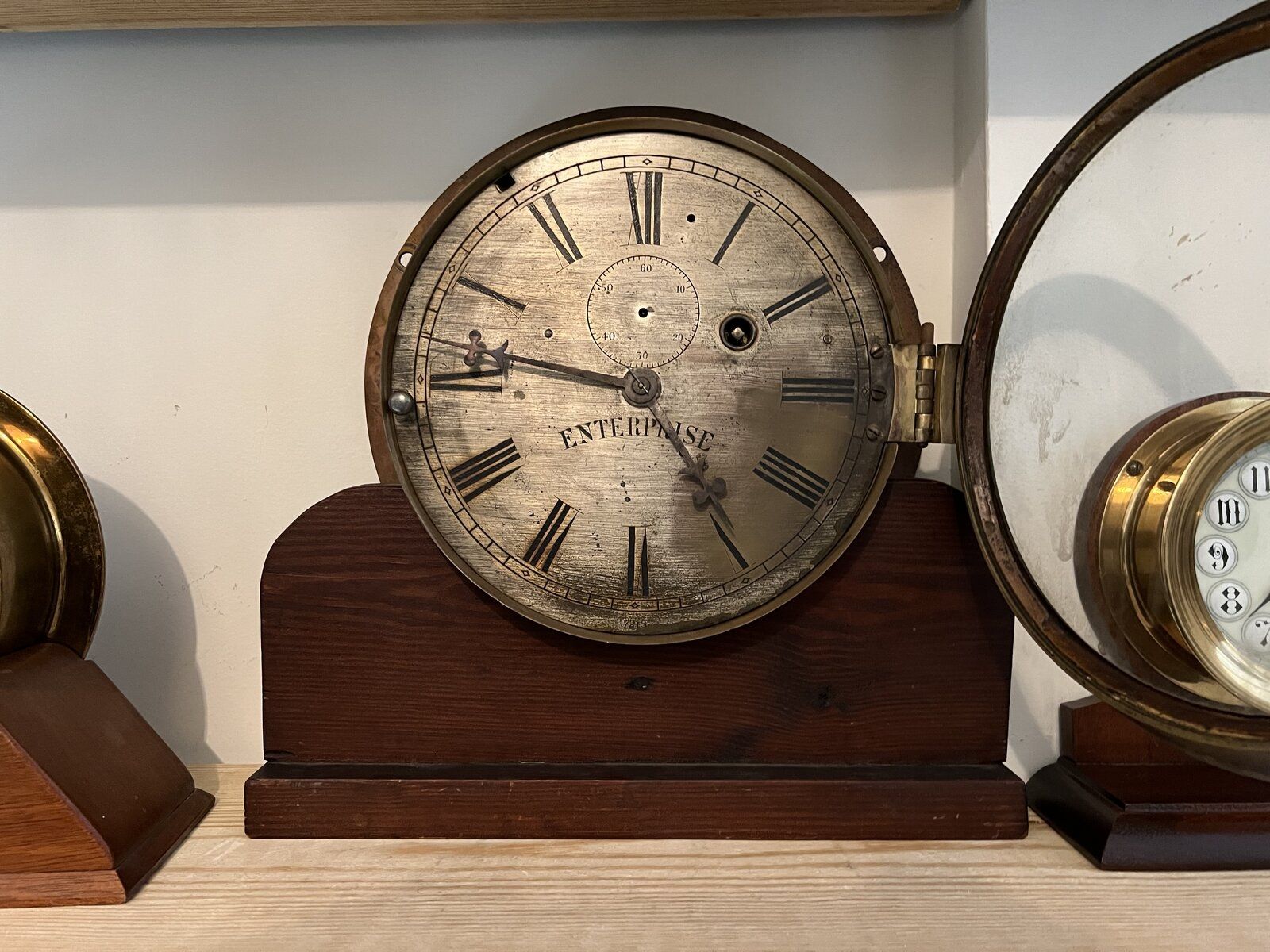 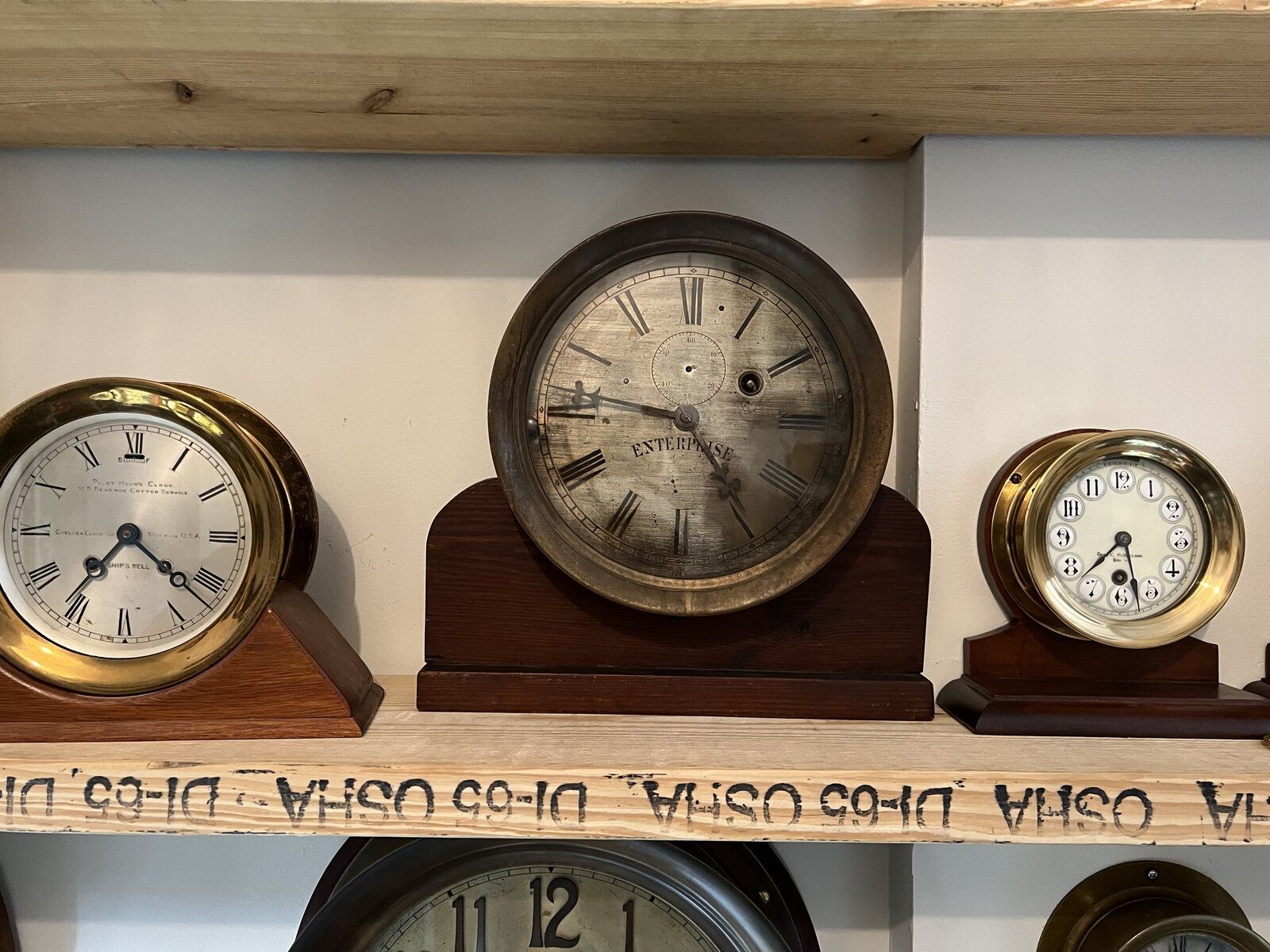 A wonderful clock with a great story. Thanks for sharing.
Toggle signature
Member: NAWCC Chapter 58, 149
Website: http://rrstd.com
Reactions: Bsohne
B

Rhett Lucke said:
A wonderful clock with a great story. Thanks for sharing.
Click to expand...