Are there any sources of Seiko catalogues from the period in the subject line.

I purchased a Seiko 5 automatic in 79 or 80, it was 21 jewel, day date with the day in English or Arabic, crown at 3 o'clock, like the image below but the hands were not pointed like these - they were squared - what is strange is that I don't recall whether the numerals had lume but they didn't look like these - mine were smooth I'm sure . In the last few weeks I've looked at seemingly thousands and the closest face to my watch has the crown at 4 o'clock (7S26 or 7019) but 100% for sure mine was at 3, it had a metal bracelet, the watch cannot be anything that did not exist in 1980.

I'd really like to figure out what it was, I had no idea there was such a massive range. I know the details since it lived on my wrist for years and the image above is about the closest I've found but something in the mind says that something is different about it but perhaps that's what 40 years does. I don't recall what became of my watch, it was the first 'expensive' watch I bought for myself (was expensive to me at the time) I'd like to buy one like it for posterity.

Just wish I could recall the numbers on the back - I have tried - the image is the closest I've seen to what I have in the mind from all those years ago but when I look for 6319-8010 quite a few come up that look nothing like the image above, it doesn't seem to be a very common watch.

That's why I was looking for some sort of catalog - all I really have to go on are the overall appearence, the period I bought it, that the crown was at 3 o'clock, it was day / date and 21 jewel - and looked very like the image - I'd like to compare some to see if my memory is functional and that I'm on the right track - or are their others that looked like this - there is a faceted one - it isn't that and one that seems more shaped - not that either - there seem to be a huge variety of numbers in the 6319-**** series - and I don't know for sure if it was a 6319, there are some 5's out there with faces that I don't think are Seiko at all ... maybe I will never know what it really was.

Have you looked at TheWatchSite.com?

Its a site largely devoted to Seiko, including a section for vintage Seiko catalogs.

Hi Garfield, have you tried looking at images of Seiko 6309 8010 watches? I believe these had 17 jewels but might resemble your watch.

Dang, these watches always remind me of a watch I found at the water's edge in Malibu, CA. It was still running when I found it. Sadly, months later, perhaps a couple of years even, I decided to wear it out surfing one morning and it wound up (No pun intended) in Davy Jones' locker. I miss it whenever I see these Seikos with the "5" on the dial. I think it said "Sportmatic" (?) on the dial was well. The year was probably around 1979, FWIW. Carry on. Good luck finding out what you need to. Cheers.
G

I have and I found what I thought was the eureka moment only to see the 17 jewel I looked up the 6309 in my data sheets and there was a 21 jewel movement - the 6319 - but if it was a 6319 it would have been the last year of production (79) and there are so many subtle face variations, and Feiko's from certain countries that I'm struggling - and if some of the faces I've seen were genuine I'm sure that I would have seen more than one of them.

The hand shape in particular is challenging - my memory says they weren't pointed but squared and they weren't narrower at the base, I can find the things in my mind but not all in the same watch.

I've thought it to be found so many times only to see a small detail blow it - like no 21 jewel text on the face or lines on the face where there were none, faces where the lume has clearly been added or the watch didn't exist in 1980, or the watch had text that mine did not like Actus. 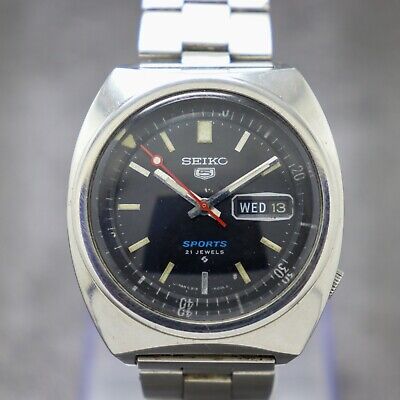 About watch or condition of the watch.
www.ebay.com
G

The hands and face are close but it didn't have the outer ring with lines, the secondhand was straight, there was only 21 Jewels, Automatic in the lower half and only the '5' logo high up. The absolute closest I've found being a 7009-3100 but I'm struggling to determine if these were available in 79/80 - there's conflicting information most saying it was not. Thanks for the info - the date I got from a couple of places for the 7009 was 1986 but mine wasn't that late. It is the variety of faces etc that makes me ask about catalogues of such watches because I've now seen 4 different 7009-3100's - hands and crown position different, body of watch different .... so something isn't right and I can't trust anything I see now to use as a reference.

This is why you need the case numbers and serials.
G

roughbarked said:
This is why you need the case numbers and serials.
Click to expand...

Not sure how that helps - for starters I have no way to know or recall what was on mine, these things are so easy to mix and match parts on that can you ever truly be sure that the back on the watch belongs to the watch. I don't know how Seiko indicated the dial / hand combinations - I believe the last 4 digits are only the case code - although for some models this does seem to indicate the cosmetic items - I have a pair of 7t42-6a00 - one for sure is genuine I bought it new - but the second is gold not black and carries an identical number. Again I've found information that the 4th digit can indicate the design so why that isn't the case with the 7t42's I can't say - I have a 3rd 7T42 that I got as a spares watch and it too is gold, it too is 6a00 so not sure the 4th digit being design is an accurate assumption

I am trying to reverse engineer what I actually had on my wrist based on images of watches for sale - I have a good memory of what it looked like - was on my wrist a few years till I replaced it with a 7t42-6a00 - I know that one because I still have it - what my 5 was I don't think I will ever know for sure unless I can find a Seiko catalog from the era.

Agreed - I have yet to find one - I have movement datasheets for nearly every Seiko but they concern themselves only with the movement - a 21 jewel watch can't possibly be a 7009 movement based on those - it would be a 7019 - where the faces etc are shown they're only black and white. So the above image which claims to be a 7009 cannot be correct if the data sheets are correct - hopefully you can see why I'm getting real confused with this search