Hi Group! I am SO new to this, so apologies in advance for any stupid questions or assumptions on my end...

My wife got me an antique pocket watch and I'd LOVE to know more about it. ANYTHING about it!

I am not looking for an appraisal, because the value is in the gift itself. But I'd love information on it. We're having a baby boy in June and this will be his someday!

Thanks everyone -- here's photos. Look at the Huguenin discussions of 16 March 2010. There were 3 Jules H working in Le Locle in the 1800's. One was affiliated with Droz. It looks like you have a 15 jewel lever action that is key wind and set from the back. The crown/stem portion looks like it is plated from the scrap in the picture. I cannot tell what the case material is due to lack of hallmark picture. If I can guess I would say 1875-1895 time frame. The inner cuvette has been drilled at the winding key which has made that portion hard to read. Is the first name Jules or something else? The serial number on the case if the case is matched to the movement would tell you something if you compared it to auction results where they knew the age of the watch. Personalizations would let you know that it wasn't made after that date. JFL
H

Thanks so much for your reply. Can you clarify a few of your statements for me? I am just starting to learn the ropes...

"I cannot tell what the case material is due to lack of hallmark picture."

"Is the first name Jules or something else?"

The clock face says "Jules Huguenin". Is it possible the face is not original?


"The serial number on the case if the case is matched to the movement would tell you something if you compared it to auction results where they knew the age of the watch. Personalizations would let you know that it wasn't made after that date."

I don't understand this statement. Can you simplify for me?

Thanks for your patience!
Heath

First of all, "hallmarks" are the punch marks made on a case to indicate the maker, the fineness of gold or silver (if it is made of one of these), sometimes the town/area in which the case was made, and in the case of British hallmarks the date. It is probable that your case is Swiss silver, in which case it would have a number .800 or .935 representing 80% or 93.5% solid silver content. It would probably also have one or two emblems of a standing bear (if it's .935) which is the Swiss assay mark. There are some other variations of these marks. It may also have a monogram or initials or even a trademark indicating the casemaker. These marks will appear on the inside of the back cover and/or on the inside of the cuvette (dust cover).

There is every reason to believe the dial is original. My guess is that jfl was concentrating on the cuvette and didn't notice the name on the dial Your watch obviously was made by Jules Huguenin of Le Locle. Pritchard (one of the authorititative reference books on Swiss watches) gives only one Jules Huguenin, although she does mention that another author (J P Bourdin) listed three.

Pritchard gives little information except to identify a second company name, Jules Huguenin-Droz, for this maker.

It is notoriously difficult to date most Swiss watches accurately, but it's a safe bet to say yours is in the range 1880-1910. It has a fairly standard decent quality movement, and apart from the winding hole it looks in good condition.
Toggle signature
Martin Rosen
H

The inside back cover does indeed say "750" -- does that represent the silver content?

It's amazing to see such tiny instruments working!
B

Your watch sure looks familiar .... Check these pics Cool! What do you know about that watch?

Not a whole lot, other than it belonged to my maternal grandmother and it was the first pocket watch I inherited. If she got it new it would date to 1910 to 1925 or so but the movement looks alot older than that.

When I had it restored, the opinion of the watchmaker was that is was an "ebauche" watch, i.e. as assembled in Switzerland from parts supplied by various lower level parts makers, made for the US market. While Bautte was a famous early Swiss watchmaker, his name was just used by whoever assembled this watch to enhance its value in the US. Note geneva is spelled with an "a" (the English spelling) and not geneve (the Swiss spelling).

If anyone can add to or correct any of this, please do so. I'm still curious about this watch.
N

Oops Good thought, Neuron. It would need to say 18K somewhere, I think, but gold is a much better bet than .750 silver.
Toggle signature
Martin Rosen

Besides that, the case is white and certainly predates white gold.
Toggle signature
Kent
That guy down in Georgia

Besides that, the case is white and certainly predates white gold.
Click to expand...

For reasons unknown to me, Swiss gold cases seem always to be engraved 0.750 or 0.585 (with the zero in front) while silver doesn't have the zero.

The cuvette is obviously white, but one of Heath's photos does seem to show a gold-ish colored case ... maybe ... I think
Toggle signature
Martin Rosen

Hi chaps. To add my two pennyworth:- I've picked up a number of 19th century silver Swiss watches (parts of lots with the English early 19th century watches that I was after ). Many have the silver content marked 0,935 or 0,800. I note that the balance cock has S and F and not R and A or both, which suggests it was made for the English speaking markets, as indeed does the engraving on the cuvette. Could not the 750 simply be the case number? It’s a club escape wheel and it appears to have a compensation balance, but I can’t see any cuts near the balance arms and looking at it again I can see that it’s not bimetallic. Odd. As has already been said it’s difficult to date Swiss movements (particularly during the last half of the Nineteenth century) but 1880 -1900 would be my (inexpert) best guess.
H

Honestly, thank you all for taking the time to comment. GOLD would be a pretty big surprise, as it is certainly a silvery color throughout.

Here are two pictures I should have included with the 1st posted set:

This is inside the back cover... Heath;540565 said:
Here are two pictures I should have included with the 1st posted set
Click to expand...

Well this just goes to show why we keep asking people to post photos Now I see the photos, I can tell you that the "750" has nothing at all to do with the hallmakrs or assay marks, it's just a part of the case number ... probably the jointer's mark ... which tells us nothing about anything

The case is probably base metal, but it might just be unmarked silver.
Toggle signature
Martin Rosen
D

With regard to the debacle on the cuvette, around the winding hole; a decent silversmith could repair that without too much trouble by making and silver soldering in place a replacement part and drilling a new hole. That is, of course, assuming the case to be silver. May be a tad expensive but if you are planning to keep the watch long term it could pay for itself by excluding crud from the movement - there's enough of that manages to find its way in without having an open invitation for more!
Toggle signature
'Time is an illusion' - Albert Einstein
You must log in or register to reply here.
Share:
Facebook Twitter Reddit Pinterest Tumblr WhatsApp Email Link 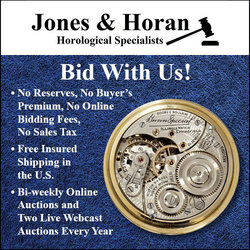