Before 1600 Old German thingy aka Türmchenuhr

The case surmounted by the cast figure of a knight holding a spear on a steep concave top, each of the four sides of which is engraved with a winged cherubs head or a flower, on an open fret of pierced strapwork with a serpentine flat base, over four tapering columns set on each of the two removable side panels which are decorated with further strapwork, foliage and masks, the rear cover with two winding apertures set within a pattern of ribbands, foliage, swags, and - most unusually - incorporating a pair of hanging fish. The front panel with another pair of winged cherub's heads to the upper corners over swags of fruit and mythical term mounts, with pierced central aperture, all on a shallow spreading base.
The 2.5 inch silvered Roman and Arabic dial with alarm-setting subsidiary and pair of gilt brass hands.
The steel movement with tapering uprights, a pair of chain fusees, verge escapement and count wheel striking on a pair of bells mounted in the top section. 28cms (11ins) high

Photos and description thanks to Bonhams: 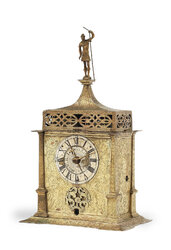 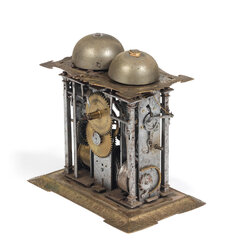 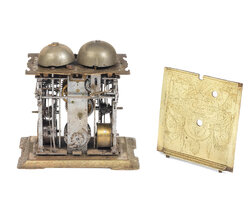 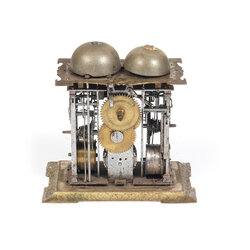 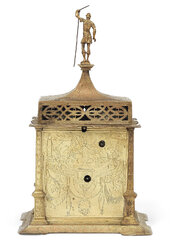 The clock is almost identical to a clock in the Warsaw museum apart from the engraving and later changes.

The top is similar design to Astronomical clocks in the British museum and Budapest museums although the tops are further embellished with wonderful mythical creatures and their movements are much more complex. The Budapest clock is dated 1577. 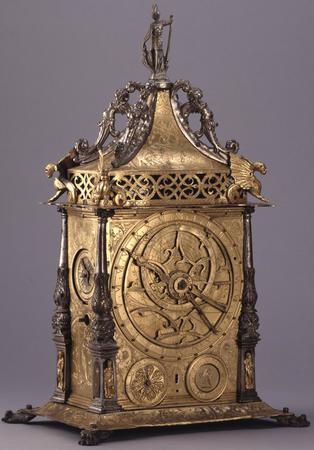 The fretwork design on the bonnet of the case is quite similar to the work of Nikolaus Lanz of Innsbruck in Maurice's book numbers 149 and 150 (150 is in the link attached). These clocks are slightly older around 1550's and often have similar plainer cases and simpler engraving.

It may not be a Lanz clock as he generally had two steps(?) on the square case pillars but if not its likely an associated maker around the same time.

The clock movement is often described as a metzger style movement who made many of the wonderful complex clocks of that era. They have three trains with the middle being perpendicular to the striking trains on the side. This requires much restoration but its a rare example of 3rd quarter 16thC clock.
Toggle signature
Sympathetic restoration, preserve what is and restore what has been
Reactions: Alex KVASHIN, Jim DuBois, bkrownd and 6 others
Z

Nice buy. If that could talk I bet it would have some tales to tell
Toggle signature
If you have benefited from the discussion here on the NAWCC forum, please consider joining the NAWCC, or donating to the message board

It is very different to your other clocks in proportions, a good addition to the collection.
Toggle signature
Nick, lots to learn, late starter.

Wooow, that an amazing early clock you bought!! You must have your own museum of real clock art. What a find again, congratulations Dean.
Toggle signature
veritas vitæ magistra
Reactions: DeanT
Z

I think the dial is a "modern" replacement - well, more modern than the 1500s anyway
Toggle signature
If you have benefited from the discussion here on the NAWCC forum, please consider joining the NAWCC, or donating to the message board
Reactions: DeanT and gmorse

You're correct Graham the dial is replaced. Soon to be replaced in the correct style. Also note motion wheel work is in brass wheels are replaced when the dial was replaced. These will be replaced using bloom steel as well.
Toggle signature
Sympathetic restoration, preserve what is and restore what has been
Reactions: Bernhard J. and gmorse
You must log in or register to reply here.
Share:
Facebook Twitter Reddit Pinterest Tumblr WhatsApp Email Link