Hi everyone!
I would like to ask for some help again, i bought a pocket watch movement (seems to be a Lecoultre ebauche). This movement has unique balance, and i never saw it before. The two toothed wheel on balace arm is some kind of compensation maybe? Or who was the patent holder?
Thanks! This feature is normally found on freesprungs, which yours is obviously not.
Toggle signature
Bryan Eyring
NAWCC#132532, President, Ch. 28, Historian, Ch. 149 https://www.facebook.com/NAWCC28
S

I found something similar, maybe would it be a patent?
US862465.pdf

sternerp said:
I found something similar, maybe would it be a patent?
US862465.pdf
Click to expand...

Link doesn't work for me.
E Hi Enrico!
You presented here 3 patent in same theme, i found earlier just the one;-)
2 american patent from J. A. Freund and one french patent from M. Freund.
The following questions arose in me:
Did J. A. Freund and M. Freund invent the same independently? Or maybe there is a relationship between them? Maybe relatives? Is the date of the French patent known?
Curiosity for me: if you look closely the French patent contains the two different US patents also!
Regards! Peter

sternerp said:
The two toothed wheel on balace arm is some kind of compensation maybe?
Click to expand...

No, not compensation, just the equivalent of timing screws. The same principle is seen in PP's 'Gyromax' balances.

Is the same person, the M for Monsieur ( Mister) here is a brief description of the patent

"The object of the invention is intended to replace the "racket" generally in use in watch movements with a view to adjusting the function of the spiral of the escapement; this result is obtained by said racket by lengthening or shortening the hairspring to delay or advance the rate of movement. [0013] 66 The invention consists in the combination of the balance with a regulator which regulates the function of the hairspring leaving the hairspring completely free in its action, its vibrations being accelerated or slowed down only by the weight of said regulator and not by a change of i5 the spring. hairspring length. [0014] 73 This adjustment, although influencing the balance, has no relation to the temperature adjustment, as its resemblance to certain devices fulfilling this purpose might suggest."
Regards enrico

Hi,
It should be noted that Joseph Alexandre Fréund resided in Switzerland, which is why there is a patent written in French (N° 351979A), but this patent has been registered in the USA under N°862465.

Funny this thread bubbled up to the top again. Since I last posted I've found another Haas Neveux freesprung with this balance arrangement. Sadly, I've already sold and deleted the photos but the serial # was 112177, for anyone keeping track of these. Here is 112134, which I've also owned. 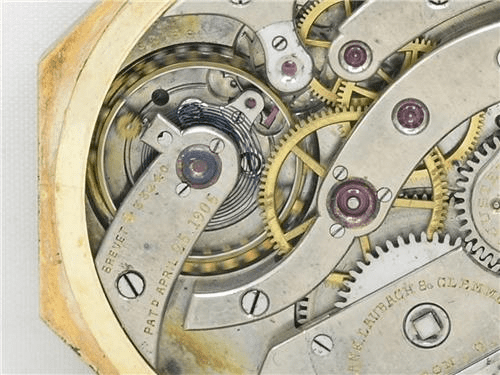 Is this a LeCoultre ebauche?