This is a really old thread that I am reviving for two reasons. One is that the original images of the IWC Jones model H have been lost with the disappearance of my old AWCo web site.Some of the images are preserved in the Internet Archive capture of the site but not all of them. I still own the Model/grade E movement and that is part of the reason for this post.

I recently decided to have all of my "keeper" movements conserved and Denis Carignan got the E running for me. I would still love to find a case for it and an appropriate dial.

The other part if the story is why I sold the wonderful all original Model H. I first purchased the H and began researching it. I eventually got Reinhard Meis' book IWC Uhren and my German that I took two semesters of in 1954 stood me in good enough stead to work out the grades (now called models in IWC speak)..

Shortly after I bought these watches I purchased the book published by IWC written by Seyffer, Koenig and Myers which is in English. I bought it in 2013 but just read it this week. (Not getting out much just now.) The reason I do not own the Model H is that I did not trust myself with it. I was incredibly tempted to steal its case and dial for the for the Model E. I knew that if I kept it I would do that one day in a weak moment.

Serial numbers of known examples are listed in the 2013 book and both of these watches are listed there. Even more startling there are three pictures of two Model E watches with one from a late run with engraved cock. The other two pictures are of my 5847 shown in different sections. The Model H has serial number 576 and is listed in the observed examples as the earliest observation.

Does anyone have current information on these Jones watches. I am planning to do a little more research on Jones in America. There are good clues in the IWC book and there are also hints about a possible connection between Jones and Dennison both in Boston and perhaps in Schaffhausen. 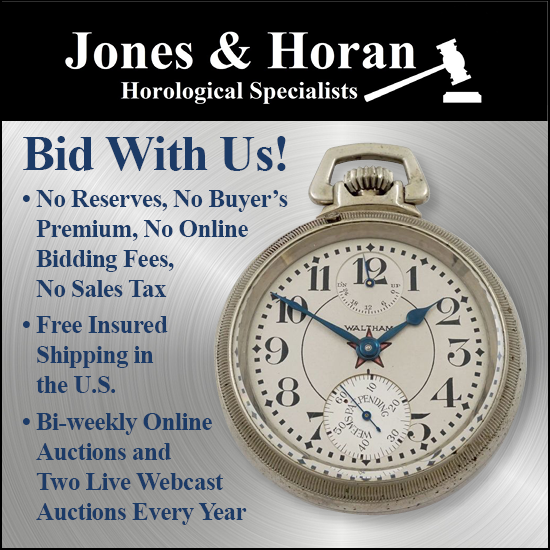