Is this the origin of the lever escapement?

J. J. Huber left Basel for London to compete for the Longitude Prize in 1754. His idea was his invention, the constant force escapement. He engaged Thomas Mudge to build it. Mudge modified HUber's concept to this design. 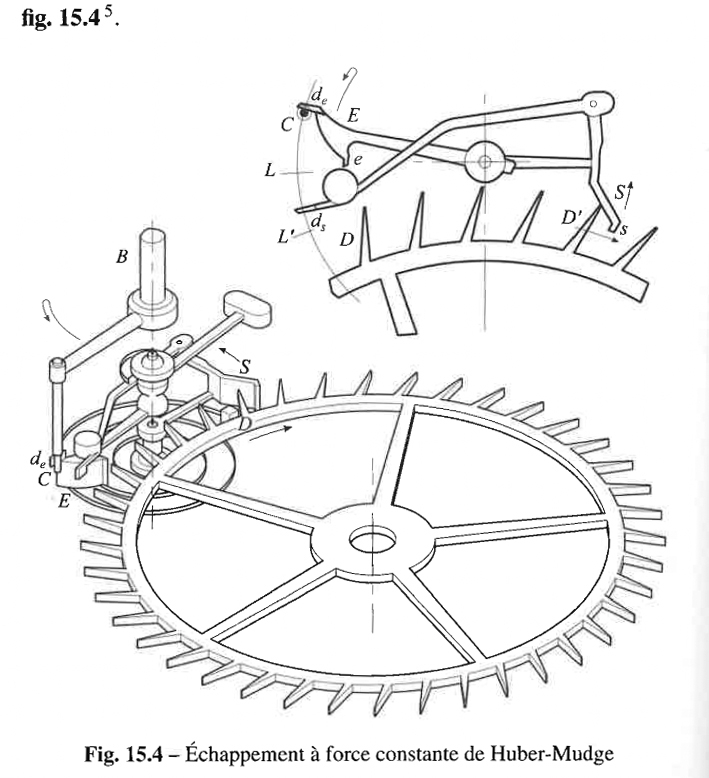 This drawing is from "les Echappements en Horolgerie Mechanique" by Olivier Laesser recently published by Simonin. The author has kindly permitted me to post this drawing., after a very pleasant email correspondence.

His description, in French, is the only one I have been able to understand.

In his description, Laesser shows how Mudge adapted this to invent the gravity escapement.

It seems to me that the version shown here also morphed into his lever escapement. The essential element is in place. This is the use of pallets to drive the balance both ways from an escape wheel.

Mudge retained his preference for constant force and walked away from the lever, but I suggest this is where it began. 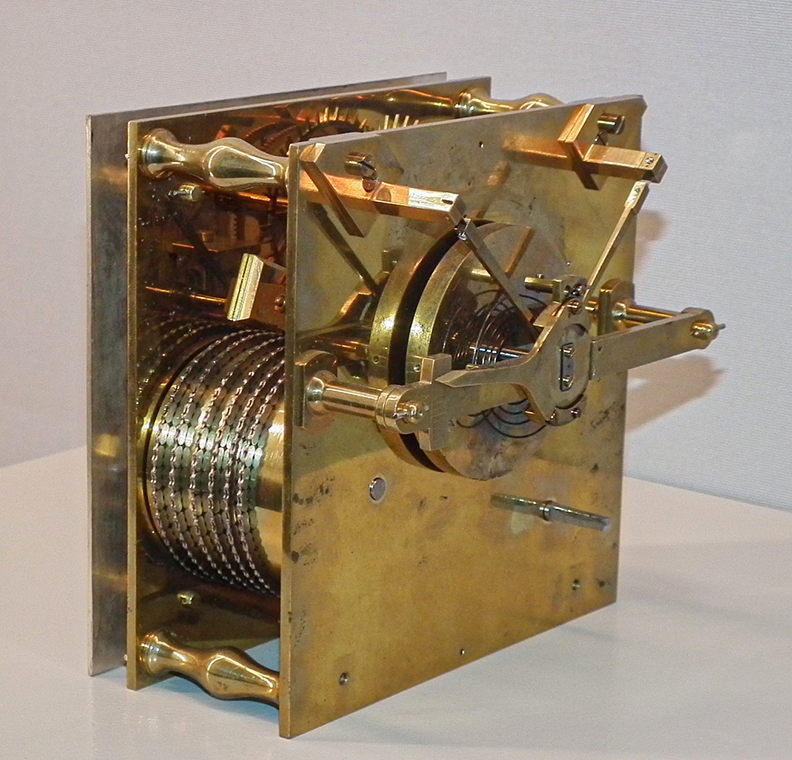 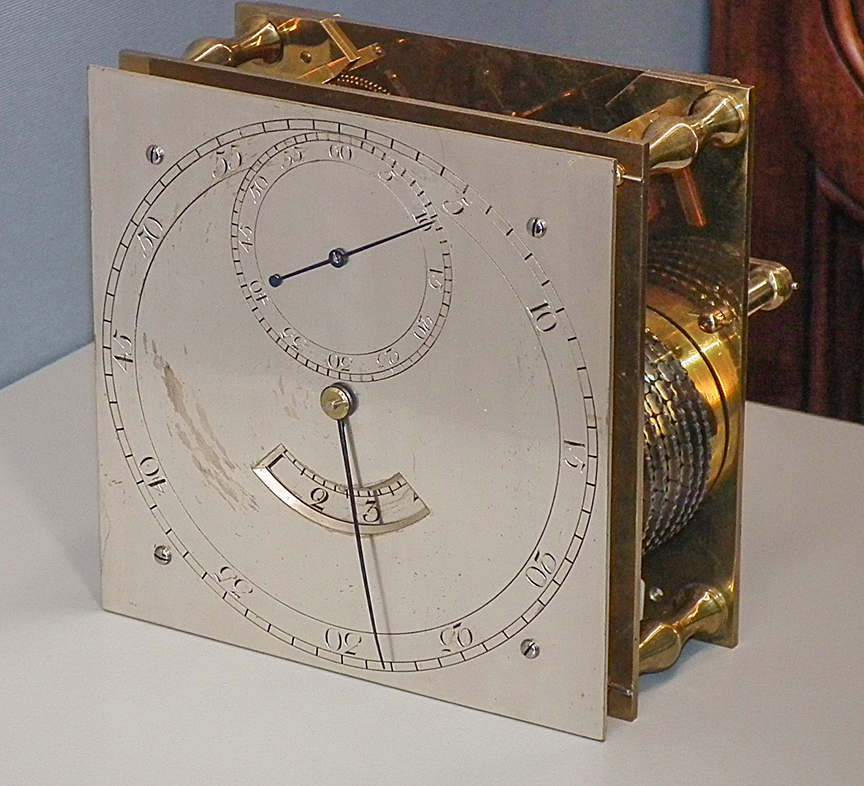 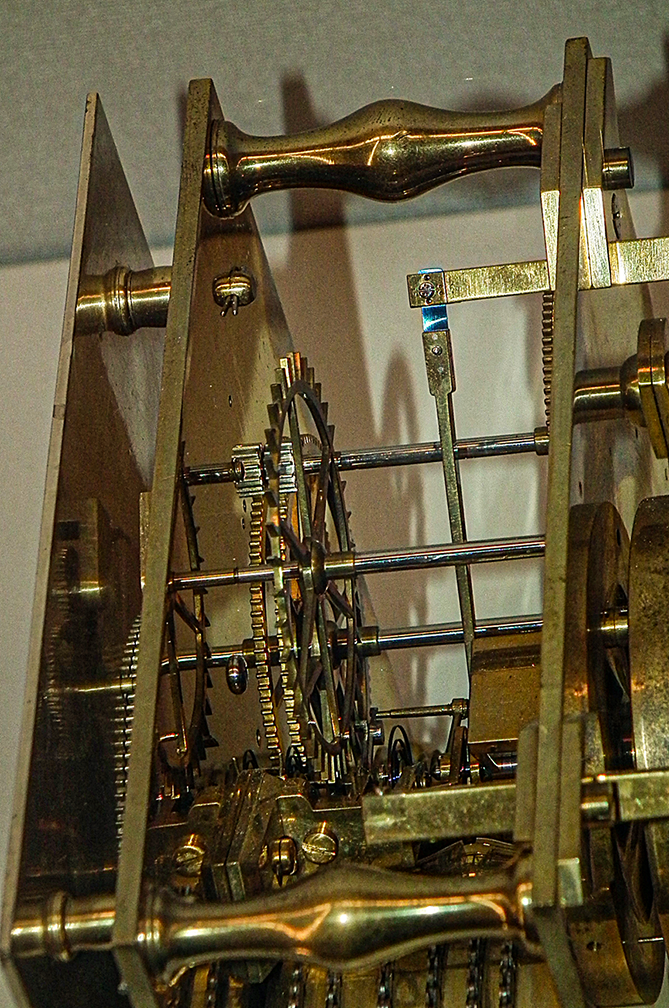 Two aspects of this struck me when I saw it. First it looked English and was among Basel made clocks which looked very different. The other was its simple balance wheel.

This timepiece has a long and eventful history.

Mudge used a simple balance wheel to enable him to get the escapement to work. As it was beginning to work Huber, took a job with Frederick the Great as court mathematician, married into money there and left the Longitude competition. There is documentation that he remained on good terms with Mudge, who later used a modified version on his Marine Timekeepers, which earned a 3000 pound consolation.

I’m fascinated, and although I cannot meaningfully contribute I do want to say thanks to you for bringing this forward—and thanks to Mr. Laesser for his kind permission! I must say, after reading your review of the book and seeing this it is a volume I hope to aquire soon.

Just to start this very interesting synopsis, we have to look further back into the search Huber had to find someone to build his ideas, and he was told the only man that could possibly make such a clock would be Thomas Mudge. Has Jon said they seem to have got on together? I should think Huber was more than pleased to have that very complicated machine at long last. If Mudge took the idea further and put his ideas into the first lever watch, it matters not. Ask any inventor where he got his idea from, the story is long. "Take Newton and the Apple" It is, as you say Mudge gave up on the Lever escapement and refused to make others. he put all his strength and know-how into making what he thought would be the perfect chronometer.
I think while writing this, I can forgive him all, he did, he give us his lever clock. I have some really good photographs of his clock at the BM, I must ask them if I can use them for this thread. ( Must look up when Mudge finished his lever clock and was it before the watch. I think so)

The Huber-Mudge collaboration seems to have been cordial except for some impatience with Mudge in getting the work done.

The nature of the collaboration got a lot of attention in the 1960's when the timepiece came to London and caused a meteor storm. It is written up in the book, Pioneers of Precision Timekeeping.

The written record suggests Huber was happy to move on allow Mudge to do his thing.

Huber was in London while the Board of Longitude was active and considering how to reward Mudge and it seems Huber left this alone.

Laesser's article include Huber's original escapement which is very different from what Mudge built.

The other major player was Count Bruhl. He pushed Mudge and them Emory to make levers. There was another Count Bruhl who was running Dresden at about the same time.