I have just recently acquired one of the top three watches on my bucket list. It is an Illinois Watch Company 18 Size, 17 Jewel, Bunn grade, from 1905 with the “Temperature, 6 Positions, Isochronism” marking in the shape of a flag. In this post a little background regarding this scarce Illinois watch. In the second post following, pictures of the watch, s/n 1,742,113.

Let me begin by stating that the only significant reference that I have been able to find to date which addresses the “FLAG” adjustment marking can be referenced at the following link: https://docs.nawcc.org/Bulletins/2000/articles/2004/351/351_528.pdf. This is a “Railroader’s Corner” article from the NAWCC August 2004 Bulletin (available on-line to NAWCC members) entitled Those Other Bunns by K. Singer and E. Ueberall with a sidebar article authored by J. Cote entitled The Evolution of the 18-Size, Nickel, 17-Jewel Bunn Grade. The following information and attached pictures are excerpted from those two articles and the “Illinois Database” by R. Snyder.

The Bunn grade was one of the most important in the history of the Illinois Watch Company. Named for one of the company’s founding directors, John W. Bunn, the first Bunn grade watch was serial #201. A few 17 jewel gilt Bunn movements were made prior to 1895. Beginning in 1889, the first 18-size, 17-jewel nickel Bunn grade movement was produced with the first or “circular” damaskeen pattern. From 1889 to 1905, the 2nd - 5th nickel damaskeen patterns were introduced. By the time the 5th “Sunburst” damaskeen pattern was introduced in 1905, the 18-size, 17-jewel, Bunn grade nickel movement was adjusted to Temperature, 5 Positions, and Isochronism. Many collectors view the Bunn grade as a lesser watch than the later Bunn Special grade, but the Bunn grade came first, and was always a very high grade watch.

During 1905, Illinois decided that this new series of 17-jewel “Sunburst” damaskeened Bunns would be adjusted to “Temperature, 6 Positions, and Isochronism” in the same way as the higher jeweled 18 size Bunn Special grade. A total of 2,300, 18-size, 17-jewel, Bunn grade Adjusted T6P movements were produced during 1905. Perhaps Illinois was trying to elevate the status of the Bunn grade in the market and sell more units. The Adjusted to Temperature, 6 Positions, Isochronism marked 17j Bunn grade nickel movements occur between serial numbers 1,742,001 and 1,823,700.

An unknown quantity of the first run of 400 of these 6-position Bunns, from s/n 1742001 to 1742400, had the Temperature, 6 Positions, Isochronism adjustment marking in the shape of a flag on the train bridge. Refer to the Figure 1. These “FLAG” Bunns are extremely hard to find as their total production was at most 400 and quite possibly considerably less than 400. There are no existing records to document the exact number produced.

Neither the "Illinois Watch Co. - Encyclopedia and Price Guide" by Meggers & Ehrhardt nor the "Illinois Database" by R. Snyder identify this Bunn variation with the Temperature, 6 Position, Isochronism marking in the shape of a flag on the train bridge. Additionally, the word “Adjusted” is done in an older font style. In my humble opinion, in addition to the scarcity of this variation, the movement is aesthetically much more pleasing than the later “Sunburst” nickel movements due to the font used for “Adjusted” in addition to the flag design marking of Temperature, 6 Positions, Isochronism.

The majority of the 2,300, Adjusted, Temperature, 6 Position, 17j, 18s, Bunn grade movements had the adjustments marked in two lines of type below the word “Adjusted”, similar to the higher jeweled Bunn Special grade. Refer to the Figure 2. There were no 6-position hunters produced.

After serial number 1,823,600 the factory decided to go back to adjusting these watches to “Temperature, 5 Positions, Isochronism” with the movement adjustments marked in two lines of type below the word “Adjusted” . Refer to the Figure 3. The Temperature, 5 Positions, Isochronism marking lasted from s/n 1,836,501 (1905) until the end of production; s/n 2,858,200 in 1915.

If anyone has any additional documentation regarding these Bunns with the “FLAG” adjustment marking that could be shared it would be very much appreciated. The only thing that I can add is that, at around the same time, there were 18s Bunn Specials with this same flag marking. This all leads to the conclusion that these Flag marked watches were either re-markings of watches in inventory which were upgraded to current standards so that they would be more salable or upgrade of already sold watches which came back from dealers because they couldn't sell old stock...or probably both.

These are interesting and scarce variants of a wonderful set of watches. I am very glad that some of us still love this weird nerdieness.
Toggle signature
John Cote
NAWCC Board Member, Time Nerd, Chapters 149 & 18
Reactions: grtnev, Old rookie and terry hall

John Cote said:
The only thing that I can add is that, at around the same time, there were 18s Bunn Specials with this same flag marking.......
Click to expand...

Do you have:
Thanks,

Thanks for asking for this info. I have not thought about these Bunns for a long time and finding these pictures took me back into some archived file on old hard drives I have not looked at in a while. I made these photos before digital cameras were really much of a thing by putting the actual movements onto the bed of an Epson flatbed scanner. The scanner did a decent job if you messed around with the settings. The one bad thing is that whenever you had bright shiny steel headed screws the reflections from the inside of the scanner turned the screw heads dark so that they looked like blued screws. Anyway, I found a whole folder full of 18s Bunn and Bunn special scans and some notes...so...here is what I remember.

I believe there were Flag versions of the 17, 21, 24 and 26 jewel Bunn/Bunn Special watches. I do not remember seeing a 19 jewel version and I am pretty sure there were not any 23 jewel versions marked this way (The first 23s were too late I think but I would love to be proven wrong). I haven't found a 24j picture yet but I am sure I have one somewhere and will keep looking. I think, perhaps all of the 26j versions are marked with the flag marking but I could be wrong. As far as the serial number ranges are concerned, we found these flag marked Bunns in many runs of watches which had the big "Adjusted" marking between the case screw and the plate screw on the train bridge as you see it on all of these movements. As I said in my first answer, we believed, at the time, that all of these movements had the "flag" adjustment markings added after the initial movement marking. it was done in the flag form because that was the best and most graphically pleasing way to do it. When all of the movements were marked with either 5 or 6 position markings (later) there was no reason to cram it all in this this so they went to the more typical, smaller "Adjusted" marking nearer to the rim of the movement with the positions etc directly below. Here are the 3 pix I found. Unfortunately, none of these watches are mine anymore. Thanks for all of the good information. I did a quick check of the picture files associated with the Illinois Database as well as a quick on-line search and the examples (pictures) of 26j Bunn Special movements with the flag marking that I found are all from the 1st run of 200 movements from s/n 1,742,801 through s/n 1,743,000 (Mar 1908 - Sep 1909 according to the Illinois Database).

The 1st run of 200 movements being spread out over a year and a half is consistent with your previous observation in the 3rd post: " This all leads to the conclusion that these Flag marked watches were either re-markings of watches in inventory which were upgraded to current standards so that they would be more salable.....".

Do you have:
Thanks, I hope someone has a picture of a 24j Flag. I thought I had a pic but I can't find it. I am pretty sure they exist.
Toggle signature
John Cote
NAWCC Board Member, Time Nerd, Chapters 149 & 18

can't be of assistance John on 24j,

Maybe someday i will be able to take better images...but don't count on it.

Here's a 24J example... always like to help my bud JC out 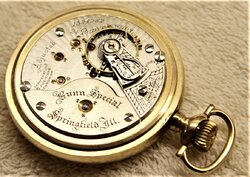 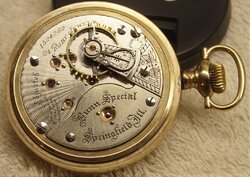