I thought my colleagues abroad, who are not only abroad but have a broad range of interests, might like to see one aspect of a Howard watch that I bought a month ago or so. There are two pictures. One shows the movement and below the center pin and canon pinion. The second picture is a close-up of the pin and canon pinion.

All this is new to me and hopefully of interest to those reading this. It's hard to see these features in the pictures below, so I hope my written description is satisfactory. The pin with a longitudinal slot is a more elegant and certain way of providing the necessary friction for driving the hands whilst also allowing them to be set. You find these centre pins with a square end in key wound and set watches from Switzerland and later from England, to allow setting from the back, although they usually lack that slot. The screwed on cannon pinion is certainly an unusual feature.

The center pin on the Howard has the square end. I guess one could set the hands that way. But the watch is both pendant set and pendant wind.

In truth, this watch has been a source of stress. Had someone on the American pw section not informed me that the cannon pinion is screwed on, I would have taken my cannon pinion remover and tried pulling it off. Apparently back in the day when these watches were carried, not many repairmen knew that and many were damaged.

Another peculiarity (to me) is that the barrel sits in a hole in the bottom plate. The lid of the barrel needs to be twisted off to free the arbor from the inner coil of the mainspring, then a retaining ring (on the other side of the plate) has to be removed in order for the barrel (with the exposed mainspring inside) to drop free from the plate. In other words, the barrel and lid (with arbor) need to be separated in order to remove them from the plate.

The other things that cause me some stress are the Geneva stop and getting the movement back in the case. Today I re-assembled the watch sans the stop work and set the balance in motion. Runs beautifully. I need to get a better understanding of which way the barrel arbor turns and where to set the Maltese cross. I think it's simple mechanics. And then I don't like stems with those little detent screws.

This will need to wait. Work work will occupy much of my time this week. I hope to have the movement back in the case this coming weekend.

If you have been on this forum you may recall that Patek Philippe used this in the 1860's so I am keeping this post here as an homage to European watches.

To my knowledge this slot is unique it Howard. Now imagine how they made this pin and cut the slot!
J

Dr. Jon: At your discretion. Yes, the Howard is a US watch but has some features more closely associated with Continental watches. It was with that in mind I thought people abroad might find this watch interesting. I like drawing attention to similarities and differences between watches of different national origins. For example, if I'm not mistaken, the American full plate movement is descended from the English full plate movement. And the way US pinions are cut follows the English manner. On the other hand, I've never seen a US production watch laid out like a Swiss bar movement. But on my Howard the lever looks Swiss in style. So thanks for letting this stand here.
D

To my lnowledge there were no US movementmodeled after the later Geneva bar movements but Swiss movement had a major influence on Us made watches. The vasdt majority us US made movement have Swiss straight line levers with club tooth escape wheels.

Here is the Illinois 40 Ilini 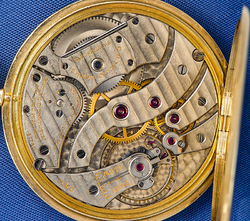 teh winding bridges differ but the center bridge, drive train cocks and balance spring stud have a strong resemblance.

Hi Jon,
Once upon a time, in the west, I thought I should know a little bit about American pocket watches. The Howard history is a great story and I have to admit I was surprised how elegant his watches were for 1856, (Made English watches look dull) so I bought this movement just to have a closer look at one. My question is does this movement have that pin? I keep this well hidden, in case someone asks me a question.

The pin in question is only on Old Howards with a jeweled lower center, typically the 17 jewel split plate models, produced about 1900. It is a major reason I beleive the reluctance to jewel that hole is concern for thrust loading cauing breakage when removing the cannon pinion. Typical Howard using a very late copy of a European element. Howard also intially copied Lange's pin on the lever for a banking limiter but that was in the early Howards.

I have been working on an old watch with a pin like your Howard. Saunier, in Tripplin's translation, calls this pin a "hand setting arbor". I am impressed with the elegant effectiveness of this system, as managed by Saunier's methods. If you press the pin with the back supported in a stake by driving the cannon pinion onto it, it's installed is very safe.

Saunier recommends adjusting the friction on the center wheel by essentially knurling it with a file and then burnishing for final adjustment. This is lot simpler and accessible to swervoce people than a slotted pin. Removal is by pressing out the pin, again with the view side in an open stake. It is a much easier and forgivng system compared the hard friction fit over s solid center arbor.

Louis Audemars used a variant this on their simple watches and many if not most repeaters use the Audemars system of a hand setting arbor with a catch spring secured by a bar,

Those who wish to learn more about E. Howard & Co. watches, which are distinct from the watches made by the entirely separate E. Howard Watch Company of Waltham MA after 1903, should peruse the sticky thread I created in the American Pocket Watches Forum, which collects all the best sources of information about the products of the original line of Howard firms:

Note that the actual name of the watch company founded by Edward Howard changed several times over its 44 year watchmaking history, but with only rare exceptions, all watch movements made by this succesion of companies were signed "E. Howard & Co."

As for the threaded cannon pinion and center arbor, these features only appeared on the so called "split plate" Howard movements introduced in the 1890s. These features are usually indicated by patent dates engraved on the dial plate adjacent to the balance wheel. They were made in Howard's N and L Sizes (see the E. Howard & Co. Encyclopedia article for details) and in both hunting and open face configurations. The N Size hunters were introduced in 1894. The other three split plate configurations appeared the following year in 1895. As Jon mentioned, these movements had seventeen, and very rarely 21 jewels. They also had Breguet hairsprings and double sunk dials, whereas Howard's three quarter plate movements had fifteen jewels, flat hairsprings, and single sunk dials, and they lacked the threaded cannon pinion and center arbor.

As also has been mentioned, many Howard split plate movements have broken or missing center hole jewels nowadays, because watchmakers and hobbyists unfamiliar with their cannon pinion and center arbor design attempted to pull the cannon pinions off by brute force. However, I suspect that most of these mishaps probably occurred long after these watches were made, and the knowledge of their construction in the watchmaking community had faded. In my view, a manufacturer can hardly be blamed for repairers' mistakes that occur fifty to a hundred years after the item was made and it had become a collectable. And the design did provide at least a marginal advantage by eliminating the possibility of slippage in the motion work.
Last edited: Jul 30, 2021
Toggle signature
Clint Geller, FNAWCC, # 84,947
You must log in or register to reply here.
Share:
Facebook Twitter Reddit Pinterest Tumblr WhatsApp Email Link