Dr. Jon and I have pulled together all of the information we can find for distinguishing pre-Ed. Koehn Ekegrens from subsequent production, as follows:

Background: H.R. Ekegren already was a highly-regarded watchmaker before Ed. Koehn bought his firm in 1891 when Koehn left Patek Philippe to go into business on his own. Ed. Koehn started producing watches under his own name starting in 1891 and continued producing H.R. Ekegrens. H.R. Ekegren himself continued on with Ed. Koehn as chief engineer until Ekegren's death in 1896. Ed. Koehn died in 1908. His son Edouard continued the firm in operation until the 1930s. It recently has been resuscitated. HISTORY | Edouard Koehn Master Watchmaker | Switzerland

Apart from this, there isn't a great deal of information about Ed. Koehn watches or any serial number database.

Ekegrens made before Ed. Koehn took over the firm are highly esteemed. So are the ones made after he took it over, after which Ekegren was Koehn's highest-grade label. Although there may not be a substantial reason to care whether an Ekegren was made before or after Ed. Koehn took the company over, some of us think that information is interesting, if not important.

How to Tell Whether an Ekegren was Made Before or After the Ed. Koehn Takeover: A watch with some or all of these features normally would have been made before Ed. Koehn bought Ekegren:
Some have suggested that Ed. Koehn "signed" Ekegrens made after he took over the company by capitalizing his initials EK in the Ekegren signature on the dial so that it read EKegren. This is debatable even though, as Tom McIntyre advised me, "similar dial tricks were done by other prominent makers, with the most common being the substitution of the name in very small but heavy block letters for one of the strokes of a numeral. I know I have seen that in roman numerals and I believe I have also seen it in Arabic numerals."

The problem with the "capitalized-EK-dial-test" is that, before the Koehn takeover, H.R. Ekegren was capitalizing EK on Ekegren-signed dials. This odd practice seems to have been limited to dial signatures, not signatures on cases or movements, including after the Koehn takeover.

Nevertheless, Dr. Jon believes that Koehn identified Ekegrens made after he acquired the firm by signing the dials EKegren, using equal-size fonts for the "EK". I am not so sure. At least some pre-Koehn dials also were signed EKegren with equal-font EKs, though most used a slightly smaller font for the K than the E, as may some Koehn-era Ekegrens. These font-size differences are so subtle that they seem to me just to be normal dial variability than a deliberate Ed. Koehn signifier. Moreover, whether fonts are the same size or smaller often is debatable. For example, Dr. Jon thinks the K is in the same size font as the E on this Koehn-era dial, while I think the font is smaller.

Debatable font size and Ekegren's use of equal-size fonts pre-Koehn makes the capitalized-EK-dial-test an unsatisfactory means of determining whether watches were made during the Koehn era, at least for me.
Toggle signature
Please see the C.H.Meylan and Touchon serial number databases that I maintain. C.H. Meylan Serial Number Database.docx and
Touchon Serial Numbers.doc
Reactions: Jerry Treiman, rrwatch, bei3 and 3 others
D

The graphology is tricky. The dials I refer too are hand painted and the painters used lines to get the lettering straight. The letter K lower case is tricky but the distinction I make is that after Koehn took over the painter took the K to the top line.

The difference is subtle and may not be reliable but I seems to work for the examples I have seen.

This is the sort of thing high end makers liked to do.

The other complicating factor is that there were probably about 100 watches in progress when the takeover occurred and they may have been treated in different ways.

I believe stem setting is strong differentiator. Koehn, coming from Patek Philippe, was an strong advocate of stem setting.

I believe this watch is from the transition. 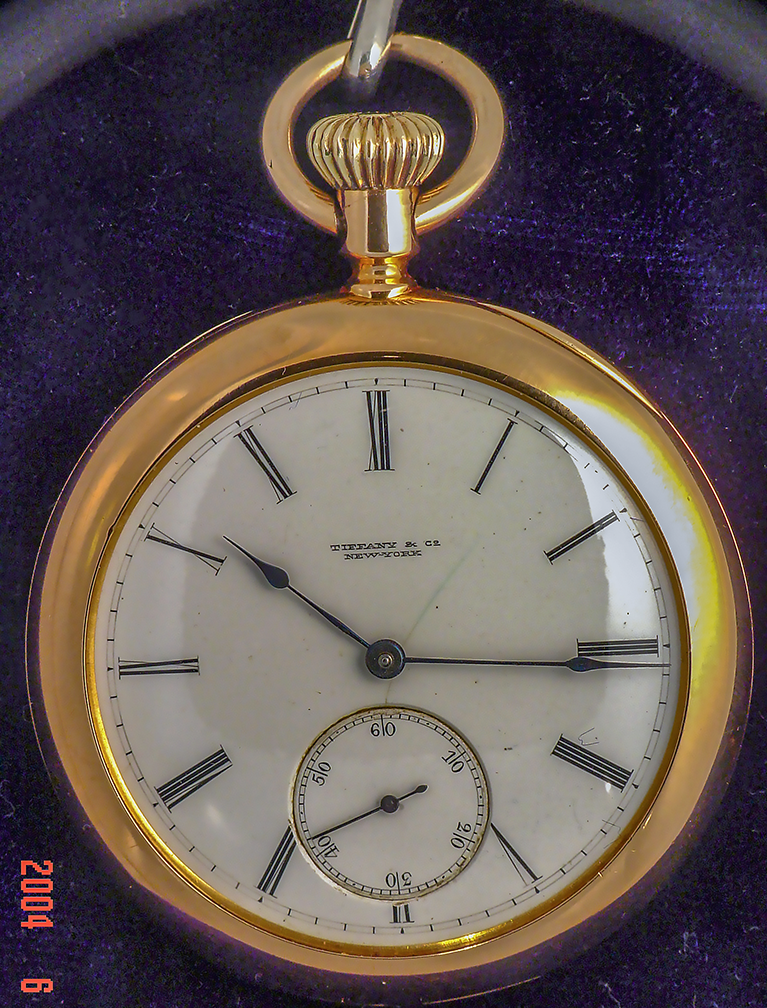 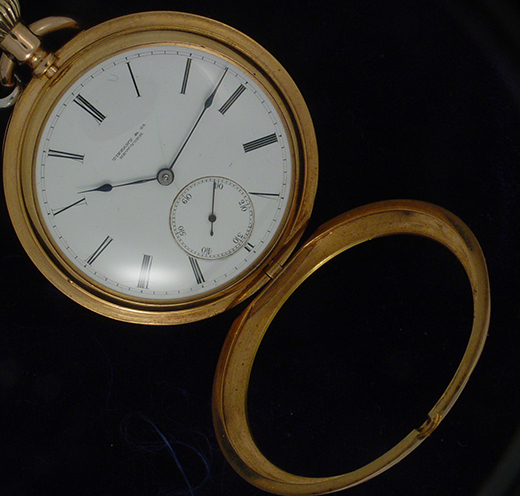 This watch is stem set.

It is very high grade with a display back. 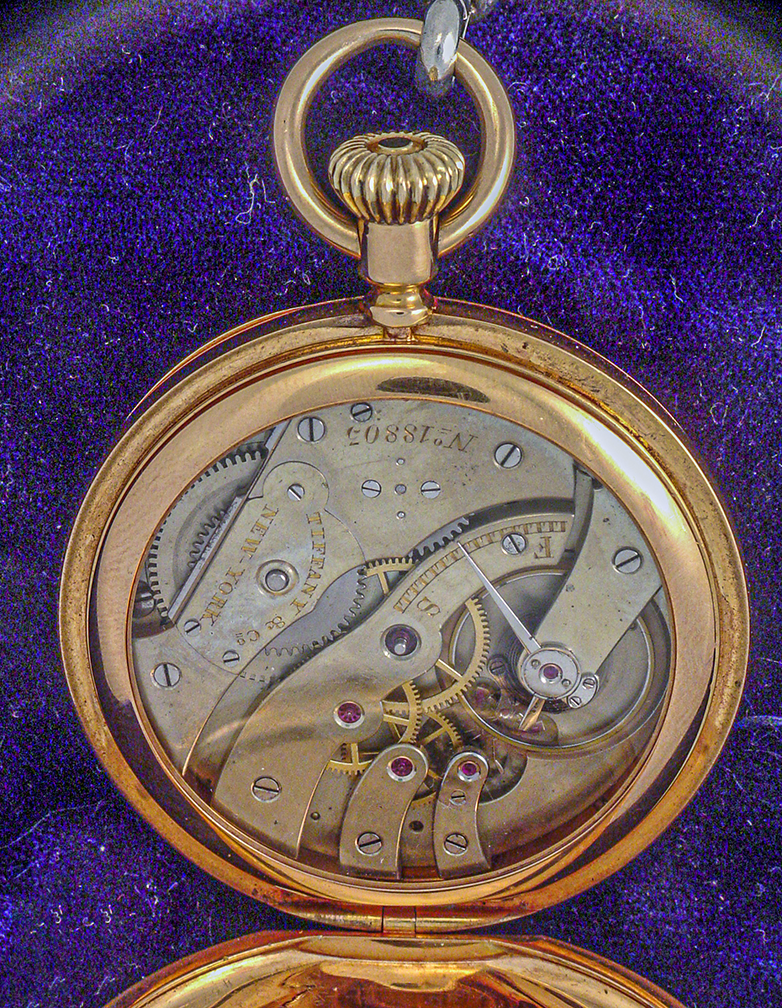 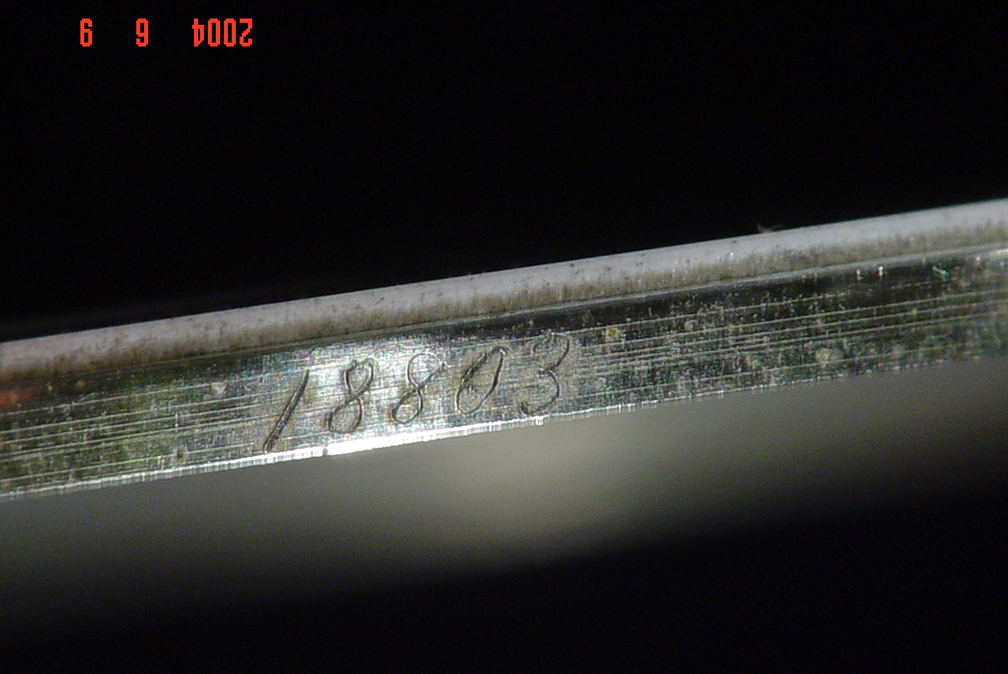 the watch has an interesting history.

Its back cover is engraved with "Daniel G. Rollins". He was the US attorney for New York City and then elected probate judge on both the Democratic and Republican tickets.

He died young early 50's of diabetes and without a will!

I believe Tiffany ordered it from Ekegren and Koehn/Ekegren delviered it. It was ordered by Rollins and Tiffany's case was made assuming a lever set.
Reactions: Jerry Treiman and miguel angel cladera
M

Thanks to you both for bringing this forward! To recap what I’m reading, you have 3 categories:
-Ekegren finished
-Ekegren residual stock, Koehn finished
-Koehn new stock

You’ve the more interesting research—and the beautiful watches to match! As usual, my contribution is mere kibitzing.

fwiw, here are the 2 identifiers I would use:
-Koehn new stock: 70k & higher sn, as you’ve shown
-Ekegren residual stock, Koehn finished: 100% certain identifier is (a) it retailed in the US + (b) it has Switzerland/Swiss/Suisse stamped or engraved on the movement. The pre-Koehn Ekegrens will not. All sns noted so far have been high 18k to 19k, but a lower number may show up. I would put Dr. Jon’s as 1888 production, imported within the next year. It may have come over as late as 1890, but IMO it is still finished before the window of Koehn. Koehn-finished residual stock seems to have come to market in 1891, and I think these stamps are a foolproof indicator.

Watch-outs/anomalies:
-UK destined watches began to be marked with the country stamp a few years earlier
-There is one known batch of 76k sn Ekegren-signed movements from 1890. My POV on likely attribution/sourcing goes without saying. I hope that others may give us the chance to see one of these live!
Reactions: Jerry Treiman and MrRoundel

Thanks, mosesgodfrey. I have incorporated your information into the criteria I set forth in post #1 and made a few minor corrections.

How to Tell Whether an Ekegren was Made Before or After the Ed. Koehn Takeover, or Was Started Before the Takeover but Finished After It: A watch with some or all of these features normally would have been made before Ed. Koehn bought Ekegren:

Very, very interesting. Thank you for the research!!!!

Unfortunately I cannot contribute anything

MosesGodfrey, whose amazing eye matches his erudition, has pointed out that my Ed. Koehn #34,434 is really #84,434, which means that it does not have an anomalous serial number. I have corrected the criteria to eliminate a reference to it and to clarify another sentence. It now reads as follows:

How to Tell Whether an Ekegren was Made Before or After the Ed. Koehn Takeover, or Was Started Before the Takeover but Finished After It: A watch with some or all of these features normally would have been made before Ed. Koehn bought Ekegren: