Dont know if this is the proper way or not but Im starting a new thread for this clock. Orig thread is this one:

I am mostly done although I dont get the full 30 hours but without knowing any of the history and whether this is even the right movement for the case Im calling it good. There are 2 things Id like to address though. One, the paper on the inside mentions a rod for syncing the strike with the hour. Ive seen these on other brass movements, they just lift the lever that starts the strike train running. Does anyone have a pic of one of these movements and what this rod setup would look like? I can fabricate whatever, just wanted it to look authentic.

The other issue is the strike on the gong: It sounds like crap. When the round hammer strikes the wire, it sounds tinny, doesnt strike the same every hit, and sometimes due to the bounce back it makes 2 strikes for one. What am I missing here? Ive cleaned the wire, secured it to the braket on the back panel. How tight should the spring for thias lever be?
M

perhaps these pics help. After looking at some spiral gong setups, i notice they all strike the inner wire near the clamp. Mine was string the outer wire. The gong bracket is also offset in the case. I temporarily adjusted it closer to center and made the hammer strike the inner wire. Sounds much better still not as good as I think it should be, but: The pics I have been able to find of these clocks seem to have bells instead of wires. Do I have the wrong part here? I have been doubting all the parts in this clock anyway .

Looks like you have to re-bend and reposition that gong a little. See attached photo. Gong should strike the outer edge of the beginning of the gong at the base end. Gongs appeared on later manufactured clocks. Probably a cost saving. These movements are all very similar. The strike count advance pull wire attaches at the red arrow in the photos. Pull the wire to strike the next hour. Understand that the strike levers are only held down by gravity (no helper springs), so the weight of the wire tends to counterbalance the force of gravity, so if you do attach the pull wire, it must be very fine (light) wire or you may have run on strike issues. 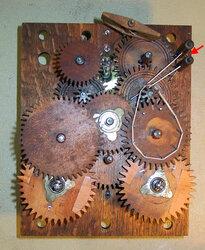 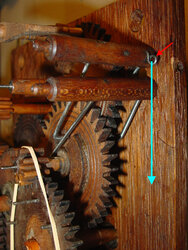 Thank you. I was puzzled about the pull wire. Ill pull it back out of the case and look. In your experience, are there usually gong wires or bells in these? The original position of the gong stand being off the side never made sense to me. Plus being a round disc instead of a hammer. Seems like hammers belong on spirals and discs belong on bells?

There was a quick shift to gongs commencing about 1836. Not all makers of clocks did so, but the gongs were thought to be a more pleasant sound and some fair number of clocks were changed over to gongs from bells by owners who wanted the latest. I have had several clocks that were fitted later with gongs but showed marking that strongly suggested they had bells first. Your clock is later enough that it could have originally had the gong, but that is not conclusive. It looks like the gong base has been moved, your label has the outline of where it was placed previously.

mrpat2 said:
Thank you. I was puzzled about the pull wire. Ill pull it back out of the case and look. In your experience, are there usually gong wires or bells in these? The original position of the gong stand being off the side never made sense to me. Plus being a round disc instead of a hammer. Seems like hammers belong on spirals and discs belong on bells?
Click to expand...

I agree, your gong stand has been relocated for some unknown reason. I don't think the shape of the hammer head has any relation to whether your clock originally had a bell or gong. The light circle on the label that it once had a gong stand at that location. I have five wooden clocks with similar movements, two have bells and three have gongs. I believe the two with bells are the oldest supporting what Jim said.