I've had this watch for more than 20 years and am only now getting around to look at it. I took the dial off and found what looks to be initials on the underside of the dial. They seem to have been made by removing the enamel powder (?) prior to firing. I put that question mark there because when a lad in high school I took an art course. We did some enamel work. We put glass powders of various colors on to copper substrates then fired them. I imagine a similar process was done when this dial was made but don't really know for certain, hence the question mark.

Anyway, here is the front and back of the dial. It's convex so no brass dial plate. If anyone has any insight as to the nature of this practice or possibly know--miracle of miracles!--who SL was, I think not only I but others as well might be interested.

I will provide additional information about the watch and it's case as I work on it. There are watch papers and they are quite legible this time. 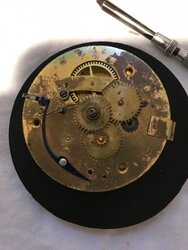 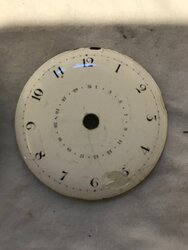 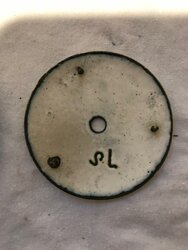 This is rather interesting, a silver (?) cap. No hallmarks. 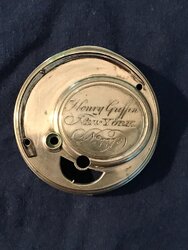 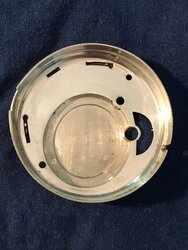 I've partially re-assembled the movement. There are no marks (letters, numbers) on the frame. And nothing on the underside of the balance cock. The workmanship on this movement seems a cut above the usual U.S. imports I've seen. 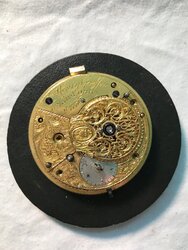 I hope you know that I have no malicious (only mischievous) bones in my body, but your response in post 2 brings to mind words such as enigmatic, arcane, obscure, mysterious, puzzling. I could go on, but suffice it to say I have no idea what a "David Penney Profile No. 3" is. Is it anything like Chanel No. 5? I tried googling it and found that there are a number of people who share that name.

Graham is referring to a series of small publications being produced by David Penney - they are advertised on his site.

The cap doesn't look like it is silver from the photograph. When present they are normally hallmarked.

The movement looks like those produced mainly in Coventry at the beginning of the C19th corresponding to Henry Griffin (Griffen) dates (1791-1818). The presence of the diamond balance cap jewel indicates to me that the movement is of better quality than the majority. It was possibly finished in London, where examples fitted with a cap, like the one you have shown, seem to be more common. It will be interesting to see the cases and any hallmarks, if present

I did try and match the dial initials to a contemporary maker, but no success.

jboger said:
...suffice it to say I have no idea what a "David Penney Profile No. 3" is.
Click to expand...

John Matthews said:
...a series of small publications being produced by David Penney - they are advertised on his site.
Click to expand...

If you're at all interested in English watches, this series of small monographs is essential reading, and they're very reasonably priced as well.

Thank you, both. I'm at the point where I'm putting the fusee chain back on. When done, I will provide pictures of the completed movement, case, and watch papers. I think it will be of interest.

I will go to Penney's website and see if I can find the relevant articles. I am familiar with some of his work, and I think he produced those wonderful diagrams of the various Massey escapements.

I think he also sold a fusee in an 18k case signed by a New York retailer. I remember the watch quite well. It was originally offered on eBay. It had (still has) an engraving on the back that the eBay seller thought was Fort Ticonderoga, which is in NYS up by the Canadian border. I sent the seller an email and informed him the engraving was of a still-standing structure now called Castle Clinton. In 1812, that structure, a fort, was off-shore on a small island; one had to walk along a bridge to get to the fort. That's what the engraving shows. Since then, lower Manhattan has been extended outwards so that nowadays Castle Clinton is right in the center of Battery Park.

I often wonder where that watch is.

Third time's a charm. After futzing around with the fusee chain, I finally got it on the third time. So here are some pictures of the re-assembled watch. There are two Portsmouth, New Hampshire, watch papers. The one for Gaines has a name on the back, William Simes. People who collect Hard Times tokens might know that name as he issued a copper token in 1837. I've taken a picture from a standard reference of U.S. tokens (Standard Catalog of United States Tokens: 1700--1900, by Russell Rulau, 3rd ed., Krause Publications, 1999, p. 122). I have not looked up anything else. 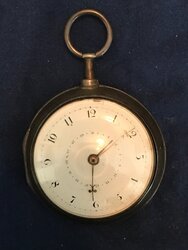 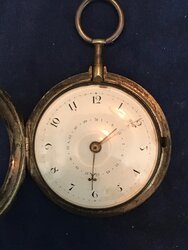 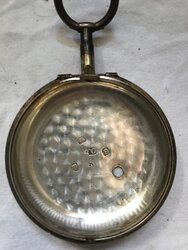 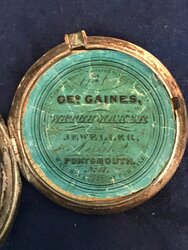 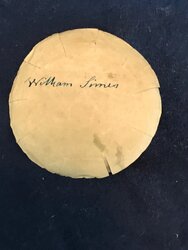 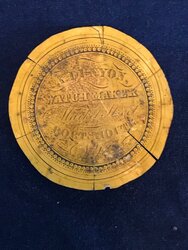 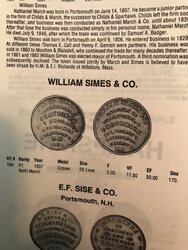 If William Simes were an owner of this watch, he definitely was not the first as he was born five or six years after the movement was cased. Here is a link to some more information about Simes: William Simes (1806-1880) - Find a Grave Memorial

John
Toggle signature
Words are so important, can't say what you mean, can't mean what you say
Reactions: PatH
J

Thank you for that. I looked both up in my usual resources and found neither. It makes sense to me that both individuals were working 30 or 40 years after the watch was made. I see several of the pivots were bushed, so perhaps after many years of service the watch finally needed a repair. That assumes a seller did not insert these papers to enhance a sale. I think in most cases a seller would remove rather than insert them to either collect or to sell separately. They did come with the watch. Too bad about the dial.

William Simes started business in 1828 when he was 22. Let's say he bought this watch when he was 30, in 1836. By then this watch would have been antiquated or at least old-fashioned for someone who had the means to buy a then-modern watch. Well, who knows what motivates people.

As one sign of better workmanship, here is a photo of part of the regulator. Most I've seen simply have two pins between which the hairspring slips. This one has a slot. I have one other movement with a similar regulator part, also an English watch but retailed in the States ca. 1805 if memory serves. 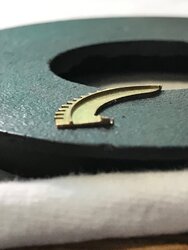 jboger said:
As one sign of better workmanship, here is a photo of part of the regulator. Most I've seen simply have two pins between which the hairspring slips. This one has a slot. I have one other movement with a similar regulator part, also an English watch but retailed in the States ca. 1805 if memory serves.
Click to expand...

Slots were fairly common in these regulator parts, being quicker to make than inserting two pins. However, one sign of quality in these parts is the dovetail cross-section of the locating ridge, which holds it in place more securely, and is absent here but present in these two examples. Very interesting, Graham. I will go take a look at my 1805 verge. It's from Georgetown, Virginia. I believe Georgetown was a separate town in the state of Virginia but has since become part of Washington, DC.

Graham - is the slot in your example dovetail in cross-section with a wider base than the neck?

I cannot see an overhang on the outer side of the slot, but possibly an overhang in the inside.

John Matthews said:
is the slot in your example dovetail in cross-section with a wider base than the neck?
Click to expand...

Yes, they both are, (they're from two separate watches by the same makers). The dovetail isn't very pronounced but it's sufficient to keep the rack section attached to the slide plate, which makes assembly much easier.

I checked my Georgetown movement; the rack is not dovetailed in. For the re-assembly of the Henry Griffin regulator, after the rack dropped out a few times, I put a small drop of oil on the track then used my tweezers to simultaneously grasp the side plate and the rack. That is, the tweezers held the rack in position so it wouldn't drop out. I think that drop of oil helps. Then I carefully lined things up before letting go with the tweezers. That seemed to do the trick.

If you look at my post #9, I included a photo of the inside of the box where the hallmarks are. This is the only example I have in which the case has been polished in that manner.

jboger said:
I think that drop of oil helps.
Click to expand...

Yes, it would, I usually put a tiny smear of KT22 in there.