I have an Elgin watch in what appears to be a gold case which is marked "AU HAVRE". I am assuming the AU means gold but the havre part leaves me cold. anyone have a clue?

I cannot recall seeing gold identified by its chemical symbol (Au) on a watch case. Can you post a picture of the mark?
Toggle signature
Jerry Treiman, NAWCC member since 1971
Member of Ventura-Santa Barbara Chapter 190

Photographs would be best

musicguy said:
Photographs would be best

As you see the case is heavily engraved so not just gold fill but for the life of me I cannot find any hallmarks. Made by "L.D." This is an Elgin Model 162. I wonder whether the LD is the mark of Louis Dessoutter. English silver hallmarks: British maker's marks identification LC-LZ (silvercollection.it)

OTOH, Guy et Cie. seems to be a French firm, possibly in Le Havre (hence AU Havre = In Le Havre). I won't rule out French Canadian, so that AU Havre = at the Harbor, wherever that might be.

I'm sure others will have better information. Can you add a picture of the movement?
Toggle signature
et idem indignor quandoque bonus dormitat Homerus.

I suspect that this (green arrow) may be a continental gold mark, but it does not look like any that I am familiar with. Can you post a sharper and larger image of this mark? 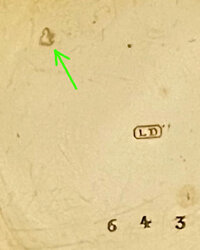 "Guy and Company in Le Havre" seems to be what we have.

Coincidentally, there's another watch being discussed in another topic/thread. It too has a case that has the appearance of solid gold, i.e., no wear-throughs, inner case engraving more common in solid cases, a thin case band, etc. While I don't see your case as having "heavy" engraving (It's somewhat subjective and relative.), it does have what is called Jurgensen lips. In honesty, I don't recall ever seeing them on a gold-filled case, but I haven't seen all cases.

I'll join Steven Thornberry in asking for an image of the movement. Personally, I doubt that the case is original to the watch, but there is some chance that it was a new replacement case, although I doubt that too. It would be nice to see that movement image to check for clues of the case having housed another movement in its life.