Here's another fusee I've had for a while. I'm in the process of leisurely re-assembling the watch. George William Riggs of Georgetown. The hyphenated spelling of George-Town is significant as it represents an old spelling current in the earlier part of the 19th C. Ditto for New-York. It too was hyphenated at least into the 1830s, perhaps later. According to Wikipedia, Georgetown was founded in 1751, that is, before the existence of the District of Columbia. Now it's an historic neighborhood within Washington, DC. I photographed the pieces before re-assembly in case anyone would care to inspect the parts. I see an English fusee. Others see much more. Note the number 27 on the back of the dial, also a letter painted and fired in. 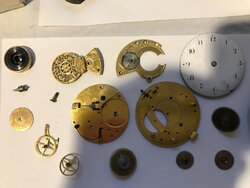 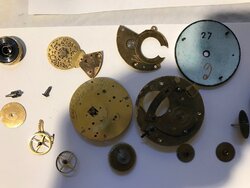 Did you fully dismantle the fusee?

Two things I have not done--yet. I have not taken the crown wheel and arbor off the potence nor disassembled the fusee. I will do so. The fusee requires, as you well know, the removal of a pin which holds the thing together. The cone can be quite dirty inside. Wouldn't want to wear out the click.

This watch has a broken staff. I did take the mainspring out of the barrel, however.

jboger said:
The cone can be quite dirty inside.
Click to expand...

Dismantling the fusee properly is, quite understandably, a job neglected by generations of jobbing repairers, so the click and/or the ratchet ring are often points of failure.

How are you going to tackle the broken staff?

That's the $64k question. I don't know. I've read about it, but have never repaired/fixed/replaced a broken verge staff. When I got the watch years ago, the bottom half of the staff was gone, so I don't have the complete staff. I have a J. Johnstone / Liverpool watch with the same problem. This watch is in bad shape. One of the teeth on the contrate wheel is missing, no hands, and the dial is bent and shows the copper underneath. I thought I might work on that first.

I bought a number of years ago ten or so staves/staffs (I don't want to look up the plural). I guess I could begin looking at those to see if one might do the job.

___________________
*I'm also aware I got to pay attention to the elevation of balance spring. It needs to line up with the stud and remain true in the flat. I think I may know some of the issues, but I'm not ready to tackle the job just yet. I want to get the watch back together so I don't lose anything.
J

I believe these are the same individual.

This is getting interesting.

Naming a son after a president is not unusual. A famous example is Woodrow Wilson Guthrie, better known as Woody Guthrie. My great grandfather, born 1841, was George Washington Boger.

However, George Wm Riggs was born in 1777. I rather doubt he was named after the future first president of the U.S. So, for the time being, I will go with William as the middle name, which means both the silversmith and Find-A-Grave websites got the wrong man, a famous nephew, but not the silversmith.

I can not rule out the engraver got it wrong.

In any case, the Riggs family was a wealthy Maryland family with political connections.

jboger said:
Right now, I have far too many questions. For example, is the angle between the flags always the same, from staff to staff?
Click to expand...

No, it can vary between 90º and 110º, with the former being more common in English verges and the latter in French or Swiss. Higher angles give better amplitude but can be subject to more wear.

And what about the mating between the crown wheel and flags?
Click to expand...

The depth and drops are adjustable, but the length of the flags must allow them to clear the teeth on the opposite swing.

Do crown wheels always have the same number of teeth?
Click to expand...

No, but they have to be an odd number for the escapement to work. Anything from eleven to fifteen is usual.

No, but as you say, the spacing between the flags must match the diameter of the wheel, typically with very little to spare on the outsides.

The balance spring collet isn't carried on the staff itself, but on the balance wheel's brass collet. The staff is usually soldered into the collet and replacing a staff often involves making a new collet; an easier way out of this is to make the staff with an integral collet, but that reduces originality. The staffs supplied as replacements often came with the brass collets already attached, which the repairer was expected to turn down to fit the wheel. You might be lucky enough to find one of these that fits, but it could be a long search.

There are several ways of making a new verge staff, WJ Gazeley's 'Clock and Watch Escapements' describes the traditional method which involves making the verge flags in a single plane and then heating it to red and twisting them to the desired angle. If that doesn't sound attractive, (getting it to run true after this is an art), you can turn the staff with two cylinders which then have to be filed or milled to the correct angle and profile.

Thank you for answering many of my questions. Very helpful. I do wish I had the bottom half of the staff as it would answer many questions. As for those two methods of making a staff, I've read about both. I think the easier of the two is to start with a length of steel wire of sufficient diameter to make the "integral collet." For now, I will put the watch back together. It may not get fixed right away but neither will it deteriorate while in my hands.