I have refurbished a 30 hour posted movement from Thomas Dicker, who was active from 1737-57 in Berks. (Clocks from him have borne a Silchester or Reading location so it appears that he moved a bit).

It is a posted movement and the case appears to be period - the height is only 76" and fairly narrow and the dial is 10" and it bears a door latch rather than a keyed lock appropriate to a 30 hour clock. After discussions on this board and helpful advice, I replaced the hands with period replicas during the restoration of the movement.

The final question for me arises as the caddy top has four holes in it, three in a line along the front and one on top above. There were no finials with the clock when I acquired it, and I am pondering what, if anything to do. I have seen some cases in this style with a single finial on the very top (which BTW, can look a tad odd IMHO), and some that have two lower down along the horizontal line above the door (though not often).

I am frankly inclined to leave it as is, as I find the look to be an appealing basic/elegant one, but wondered if anyone had any thoughts on what it would most likely have been created with. I have reviewed the images of other clocks by this maker and found finials only on a couple of much fancier 8 day clocks. 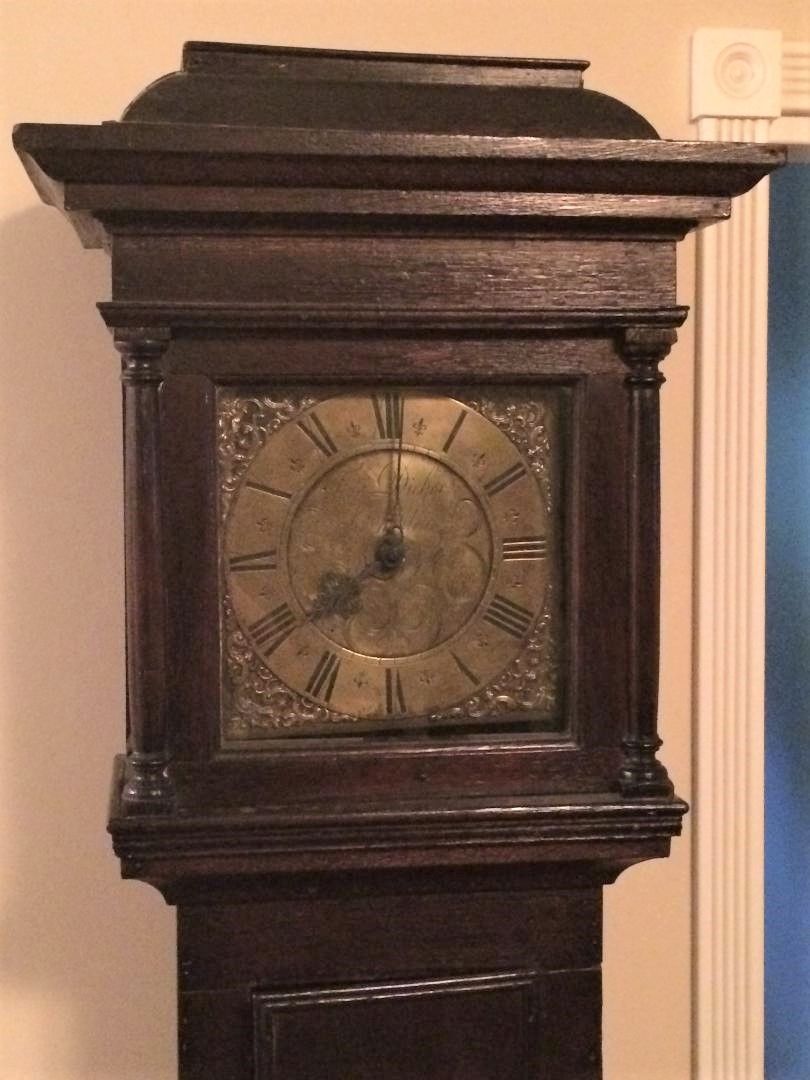 i would think leave it... but consider re-silvering the chapter ring.....

I would certainly silver the chapter ring. The clock was once a single hander was the movement converted or replaced?

I am not a huge finial fan, if it had them they would have been gessoed and gilded wood. If the holes in the top are large then perhaps it did have them, I have a thirty hour with them. If the holes are smaller then they were brass and later than the clock.
Toggle signature
Nick, lots to learn, late starter.
Reactions: bruce linde
W

The dial presents much better in person than in picture which led me to leave it as is for now, although not original. I haven't personally restored a silvered dial before and don't know of anyone who does that work in Canada, and am reluctant to send parts away for treatment. Perhaps I'll treat it as a learning experience when I have more time.

My clockmaker said that he could see no sign of this having been converted to two hands and felt that it had been originally created that way. Do you see signs of it being single handed? Or is there a reason you feel the movement may not be original to the case?

The holes in the hood are large enough to have been made for small dowels rather than screws, so it is possible that it once bore some sort of finials, but would three across the front and one up top have been likely?

re-silvering is both fun and easy... it's a do-it-yourselfer.

i've now done multiple dials and it's maybe an hour of prep, $50 of materials, a half an hour job, dry overnight, wax or lacquer... and totally worth it and rewarding.

Where abouts in Canada are you wsphon?
Dan
W

Ahh so I'm a few hours north of you.
W

D.th.munroe said:
Ahh so I'm a few hours north of you.
Click to expand...

Lol not quite that far, bout half way between Hope and Prince George
W

Must be fun finding a clockmaker locally - I had friends in Penticton looking for someone that serviced antique clocks and coming up dry (several that said they could but none with any experience and skill - just a lot of watch battery changing types).
Reactions: D.th.munroe

The chapter ring has 4 divisions between the hours. That makes it a single hander. Clocks were made to order, it is pretty much inconceivable that the customer would pay for a two handed clock that did not display the minutes, just the quarters.

To change from single hand to two hand you add to the motion work rather than take away so perhaps your clock repairer was not experienced with this style of clock and did not know what to look for.
Toggle signature
Nick, lots to learn, late starter.
Reactions: D.th.munroe
W

Well other than myself, the watch/clockmakers I knew of in Kamloops/Kelowna/Armstrong have passed away or retired and theres a few unexperienced ones here and there.
Thats one thing I don't do, change batteries.
Dan
W

Yes, even in a big city like Vancouver, there are a bunch of people qualified to service watches but they won't touch clocks. I am down to one fellow from Croatia here and another very good tech out in Tsawwassen (he's from Viet Nam). I've been in this hobby for around 45 years and have seen all the good older guys retire or die - depressing.

The clock guy I use also has a son that is coming up in the business though - he's been attending to some long delayed maintenance on my small collection of Le Coultre table clocks, so there is some hope.

Yes and the 2 high end clockmakers I know there are too busy and you can rarely even get in touch with them.
Thats good about his son we need more skilled clock repairers.
W

Don't know where the Vietnamese chap trained but he is good on watches as well. I gave him a Le Coultre Futurematic, which is a 'fussy' watch to overhaul and set up (or so I understand) and he came through with no issues.

It is a matter of choice but I'd leave as is regarding finials, as has been said the chapter ring, which I'd re-silver, is for a single handed clock.

Thanks for the dates - hadn't realized there were two Dickers.

And sorry for the confusion about the dial/movement - for the record (and future readers) I had mixed up two 30 hour clocks I'd had serviced in the same period - this one was indeed a quarter hour division dial, so was either old dial stock they wanted to use up (if that happened) or a converted single hander, although the clock guy that repaired it said that the movement seemed to have been made by the same person as far as he could tell.

I may take a shot at resilvering - watched a couple of very good youtube videos and it seems fairly straightforward - and I have at least three other chapter rings that would benefit from the same treatment.

As I said, clocks were made to order, anybody with the money to pay for a two hander would know that they needed 5 divisions to tell the time. Single handed chapter rings do get converted when clocks get altered to two handers, I think those are the early conversions. Later conversions are, I think, just to get more money when selling on a clock. Your clock man may not have much experience with clocks of this age.