Hi folks,
I'm restoring an Atmos 519 and it's got a fork assembly (part # 3826) which got badly bent out of shape. I could do the poising task but first need to get the shape restored so that the fork arms arrive correctly at the roller (not too high or too low and not too close or far away).

I'm wondering if there's a template or dimensioned drawing that I could use to bend the shape back to where it belongs.

Here's a photo of the 3826 fork assembly I lifted from an internet advertisement. 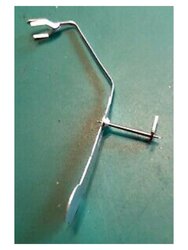 We have corrected couple.

They bend like overcooked pasta when you brush one...

They are not complicated, just be careful and do not bend against the shaft.

Meaning do ot hold shaft with anything while pushing on any part.

Place maskingtape inside jaws to protect from scratching.

You just make it look like the photo, it only has a couple places where bent.

Where flat it can be burnished against a flat board.

The hard part is where the rollerinterface is.

Top must be parallel to shaft as does the fork.

When you get it looking good try posing it, if the top is in wrong place it will not poise.

Thanks TQ60 for the very helpful words. In the absence of any earlier responses I had already done some work on the fork. I did use the duckbill pliers (Medium and small) to do some of the bending before installing in the movement. Once in the movement with pendulum hanging I did some additional forming to align the roller interface up/down to engage the roller at its midpoint, The arms of that interface were not distorted so there was no need for me to play with them. As it happened, the locking mechanism for the pendulum was missing parts (see my other post on that issue) and I broke the suspension wire .

Based upon your good words about poising the fork after bending it, I'll now be able to do so because it's out of the clock. Regarding your words: "The hard part is where the rollerinterface is. Top must be parallel to shaft as does the fork." The eBay fork shown in my earlier photo departs radically from what you advise. My bending efforts ended up with the forks midway up/down the roller despite lacking parallelism to the shaft. But I doubt they were perpendicular to the roller axis. Look like more is to be done!!

Pictures below show the fork in its present state. 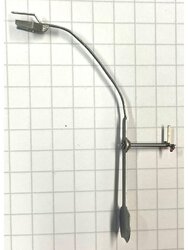 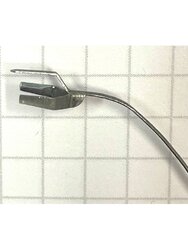 Yours is close to parallel.

It may not need to be exactangles, the top must clear the disk and the fork needs to fit the roller.

The angles of the bends can alter slightly the distribution of mass, so the poise can be altered by the bending.