While digging through the depths of the Elgin National Watch Company, I've found a watch movement that is so interesting looking... So different... I just had to learn all about it!

In the twilight years of the Elgin watch company they began importing and casing movements from abroad. Many of these are Swiss, and most are of good quality. I spotted an Elgin pocket watch marked "France" on the bottom of its dial, and that surely raised an eyebrow! As you can see, Elgin still installed their own hands. It's also "Cased and timed by Elgin National Watch Co" in a Star Watch Case #4902. Elgin dubbed this mechanical wonder the grade 755. It is a utilitarian looking mechanism with a large balance, antichoc and a very loud tick. Love it! It looks similar to the Parrenin 40... Which is commonly seen in randomly named watches in the U.S which are labeled France. Kaltron comes to mind right off the bat. Honestly I believed that's what this movement was for a while.

It took me a couple months to correctly identify this thing. Others had incorrectly called it LIP... Parrenin... Nothing made sense to me though untill I came across this fantastic article recently. An in depth history and pictorial of movements made by the Ultra company! 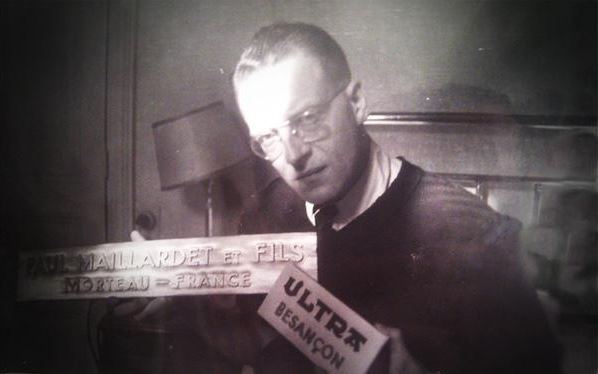 Ultra - Watches and Movements from France

My watch is an Ultra 420! I had never heard of Ultra before. There is absolutely nothing on this forum about them... and you really have to dig to find anything on the internet. That is why this thread was started to hopefully just put some information out there. The movement is stamped 420 right under the balance, I just had no idea who made it.

Prior to being purchased by Paul Maillardet & Fils in the late 1930's, Ultra made some neat looking movements! The 18''' has been put on my list of watches I absolutely have to find. The Chronometre Alpes is a watch using the 18''' and the Chronometre triomphe uses the Calibre 364. This might be the pair to find! It might be difficult! I think any nicely preserved example would do, no need for fancy names on the dial.

Paul Maillardet & Fils quickly introduced the Ultra 41, which is similar in design to the Elgin above, but gilt and there is no shock protection. Incabloc is introduced in the 410 and Antichoc and nickel plates in the 420.

Wristwatch fans will likely recognize the Ultra name, with the 602 powering the German war watches, and the Ultra Super automatic.

If anyone has a watch or watch movement made by Ultra, please post some photos and information about it!

Thanks for reading and have a good day!
Toggle signature
Allegheny chapter 37
My "blog" of watch interests
Reactions: zacandy, Jerry Treiman, PatH and 4 others

Hi,
Here is an Ultra pocket watch with a caliber 41. I have another Ultra 41 Besançon with the same caliber but steel color. It is a very well known brand among French collectors.

Thanks for sharing your well-researched experience with the Elgin 755/Ultra 41,

i may be able to shed some light on the confusion with LIP/Parrenin to which you alluded.

In the early 1960s among the so-called "Swiss Elgins" which came out, were two grades built around French calibers:

So you see, the French LIP becomes part of the equation.

By the latter 1960s or early 1970s LIP ceased production of its R40 caliber (which I believe to have been LIP's last in-house pocket watch movement). However LIP continued to market a pocket watch built upon the Parrenin 40 caliber which LIP renamed its R167 caliber i.e.one could still buy a LIP pocket watch but no longer with an in-house caliber.

Nevertheless to the best of my knowledge neither of the LIP R167 = Parrenin 40 were used by Elgin but I can see how thinga could get garbled up.
Reactions: Rick Hufnagel
E

The similarity between Ultra and Parrenin is no coincidence, Ultra's ebauches were provided by Parrenin (80%) and Femga (20%)
Regards enrico
Reactions: tick talk, PatH, Rick Hufnagel and 1 other person

agemo said:
Here is an Ultra pocket watch with a caliber 41.
Click to expand...

I think this has caused much confusion as well. Elgin 657/ R40 was labeled "Shock master" (some?/all?) and seems to be a little more common than the 755. Thank you for the explanation!


eri231 said:
The similarity between Ultra and Parrenin is no coincidence, Ultra's ebauches were provided by Parrenin (80%) and Femga (20%)
Click to expand...

So, your saying that despite the advertising... Ultra did not completely manufacture their own calibres? Reading the information from those websites linked in the original post lead me to believe they were a manufacturer and the 41 movements had been an in house calibre? The resemblance would definitely make sense in that regard. Thanks!
Toggle signature
Allegheny chapter 37
My "blog" of watch interests

Rick Hufnagel said:
I think this has caused much confusion as well. Elgin 657/ R40 was labeled "Shock master" (some?/all?) and seems to be a little more common than the 755.
Click to expand...

Yes the Elgin 657 pockets were labelled "Shockmaster"; I've not seen an example that wasn't.

LIP was very proud when they introduced their new R40 pocket watch movement with shock protection. Elgin evidently picked up on this, a good marketing tactic.
Reactions: Rick Hufnagel

Wow I just found a photo of the Femga 520, which is a great likeness to the sweep second Ultra 904. I see how this is related now!
Toggle signature
Allegheny chapter 37
My "blog" of watch interests

I can not say it is easy to find one of these!

This is the first of two Ultra that are currently relocating from France to southwest Pennsylvania. It received a clean and oil this evening and is ticking away happily. In the Geismar & Cie catalog listings on this page, you can see that the pocket watch movements, in this gold filled case, are the most expensive offerings in the listing! Neat! The case has a few more than 10 years on it and shows some brass on the rear, but the movement and dial are very nice. Flat enamel dial with a pressed center. The hands are straw, but it doesn't show up in the pictures well and they have a little age to them.

It's a well built movement. Nothing extremely fancy, but not poor quality, either. I have enjoyed my time with it and am very pleased with my first experience. Looking forward to digging into this company further!
Toggle signature
Allegheny chapter 37
My "blog" of watch interests
Reactions: zacandy, PatH, viclip and 3 others

viclip said:
Yes the Elgin 657 pockets were labelled "Shockmaster"; I've not seen an example that wasn't.

LIP was very proud when they introduced their new R40 pocket watch movement with shock protection. Elgin evidently picked up on this, a good marketing tactic.
Click to expand...

Thank you for the information, I just finished working on a Elgin shockmaster 657.
Here's some pics