All roads lead back to the Commander , Chelsea Clock Content.

Have a great weekend and I hope you enjoy this..


All roads lead back to the Commander

We all have been admirers of marine clocks , that is why we are here in this group. I have been going after them for years. As I looked closer at them and learned about all the models , wall clocks , desk sets, shelf clocks.
One of my personal favorites is the "Commander" aka previously called he "Mahogany & Metal". As most newer collectors I never thought too much about the Commander., but I started to do more reading about them. I was told Chelsea started to offer them in 1905. Over the years I have bought Commanders that were much earlier. I have one that was sold in Feb of 1901 which is the earliest example I have.
I started to look for examples of ads when Chelsea started to promote the "Commander". I have found ads from "The Rudder" from 1901 and 1902 showing the "The. Chelsea" which was the Ship's Bell on the "Base" that they offered. The Base is the mahogany & metal base ( aka Commander base) we are all familiar with. Later in ads from 1903 says say any Marine clock striking or time only is available with a matching base. See attached ads below.
But by far the most interesting piece of early marketing is early "Editorial " style placement in "The Rudder Quater-Deck Talk" section... from Sept 1901.... see attached... but I have to include a copy of the text here.
"In the long winter nights a striking ship's bell clock brings back many pleasant memories of a yachting season.
Owing to the great demand for them in clubrooms, private residences, etc., the Chelsea Clock Co., have gotten up a very attractive and substantial base to fit mantels or odd corners in a yachtsman's den. These clocks are splendid time-keepers and very useful ornaments to any home or office."
As I mentioned this is from Sept 1901. The think tank at Chelsea Clock Co was working on ways to sell what they had Time only and Striking Marine WALL clocks, to a much broader audience. Chelsea at first call it " The Base" and and " The Chelsea" You can see the ads attached. One ad from "The Rudder" in 1903 spells it all out for striking and time only Marine clocks not only for the wall.
Now back the year 1905 it was a busy year for Chelsea and Walter Edward McGraw at the time was General manager at Chelsea Clock Co. He filed a patent for the "Clock- Support" and the m&m base. Not sure why Cheslea waited till 1905 to file for this design but it was granted on April 18th 1905 and was enforceable for 14 years till April 18 1919. No one else could make a Commander base. Also keep in mind as you read the patent it does not list material used or size... So an all wood base is also protected the same as if you were to elongate the base so to accommodate a pilot ("ships wheel") clock on this stand it is effectively a Mariner ( later marketing term that was coined in late 1920s). I have even seen an entry in the Chelsea Sales Ledger calling the 3 1/2 time only "pilot clock with a base" a " Wheeled Commander" (most people later would refer to it as a Time only Mariner).
In August of 1905 Walter Edward McGraw filed for a new style Clock case that we would later known as the Base& Ball and later "The Commodore " and it was granted in Oct 24, 1905 . Chelsea also would be " Protected" from copy cats of this design as well till Oct 24 1919. Also Keep in mind that from the base and ball you can see how "The Neptune '' could be made with an additional base plate. The Admiral is almost a full metal version of the Commander and so on....
In 1906 Water Edward McGraw also filed a patent for what we call today "The library" Clock. He filed it in July 2, 1906 and was granted a patent on August 21 1906.
Who is Walter Edward McGraw ? From what little I was able to find , he was one of the first employees at Chelsea. He was part of the original board and resigned jan 22 1901, as per Andrew Demeter. But stayed on and later I found reference to him being general manager in 1905. I can't say with 100% confidence that the "Base" was his brain child and his other off springs that would include the Base & Ball and Library clocks . But he was there from the beginning and was the person who stated he invented the above clock case and support systems and held the patents.
In my opinion Chelsea Clock Company created the Marine styled Shelf clock in 1901 maybe 1900. The Commander was the first Marine ( Case style) Shelf Clock "GRAND DAD of Marine Shelf Clocks" . If anyone comes across a Commander that is from before Feb 1901 please contact me. Also keep any eye out for any early Marine style shelf clock anything earlier than 1905...
It is funny when I read comments online like the one below:
"Turning wall clocks into shelf clocks is a relatively new thing for
Chelsea collectors." This is from Aug of 2022...
All I can say is the Chelsea Clock Company has been doing it since 1901...
and that is why I say " All roads lead back to the Commander"
Good Hunting
Bill Sohne 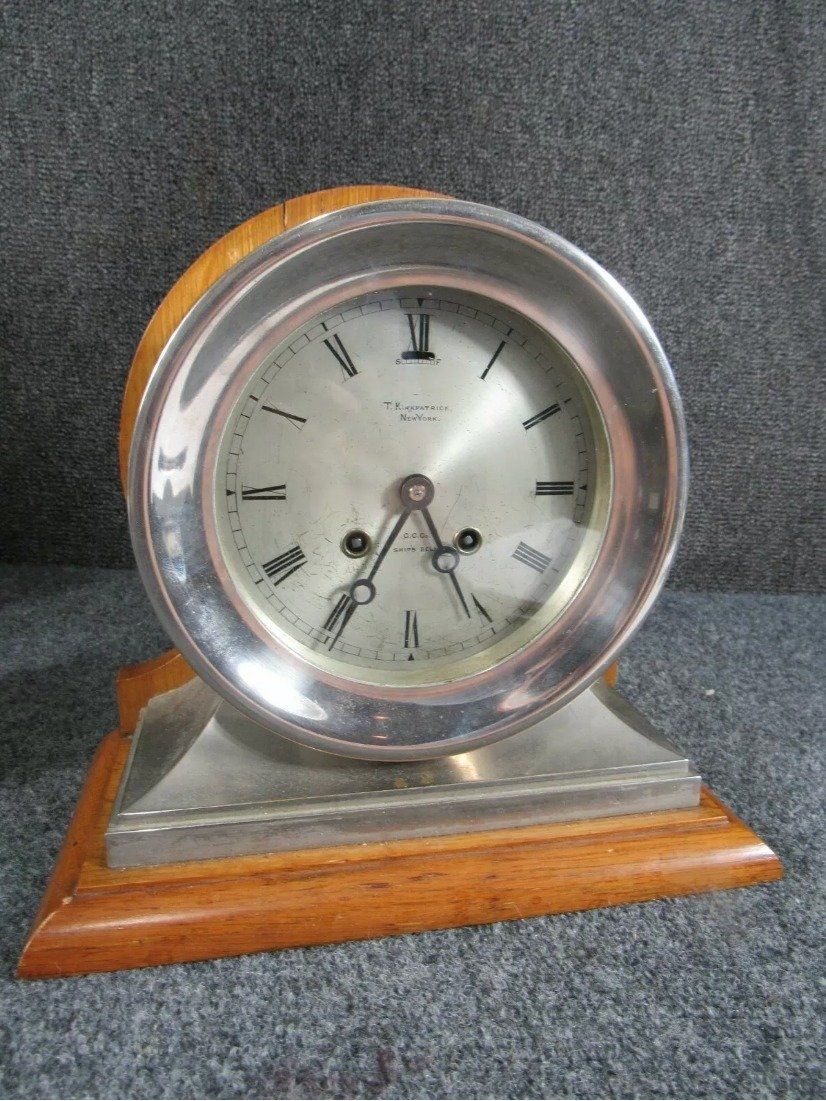 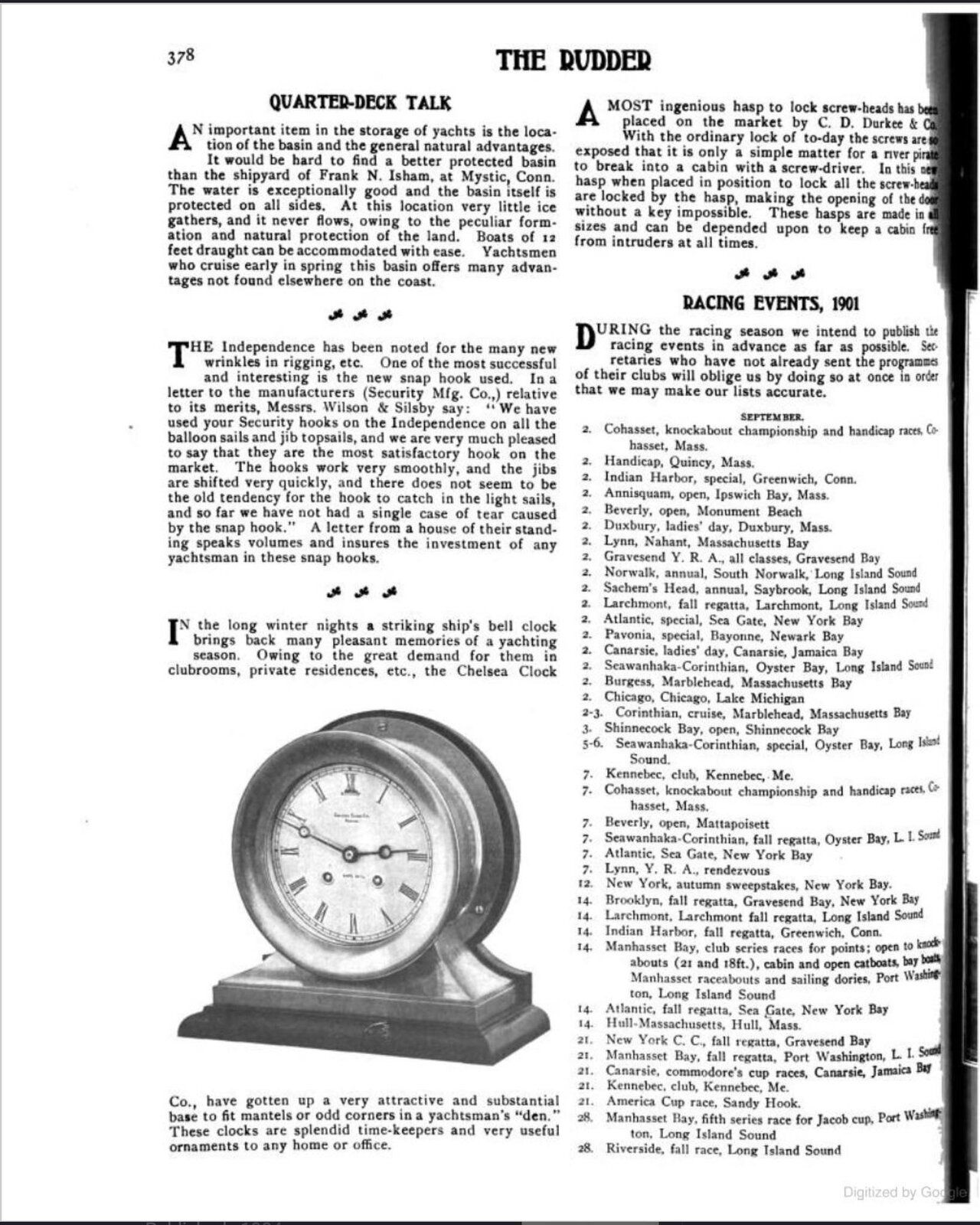 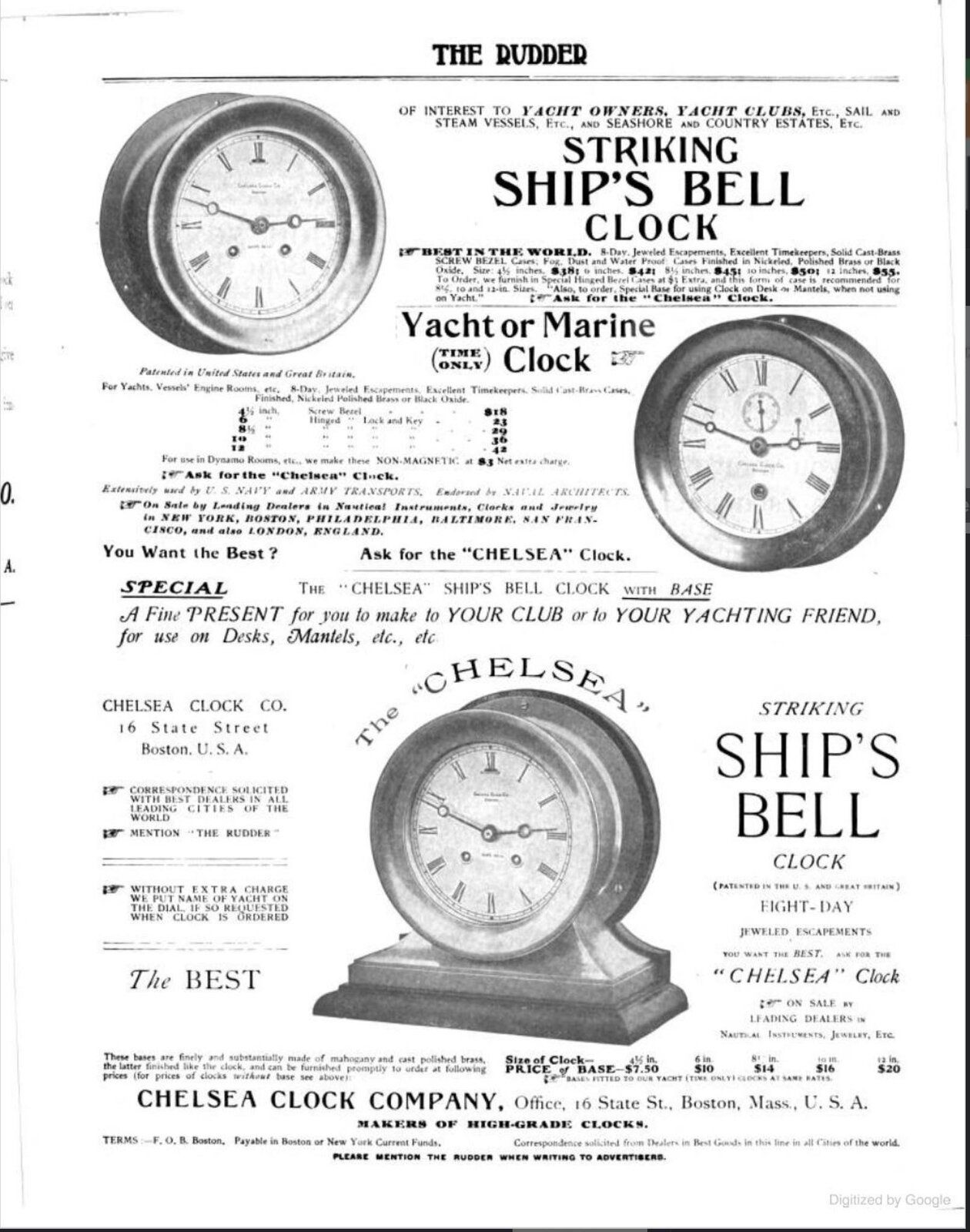 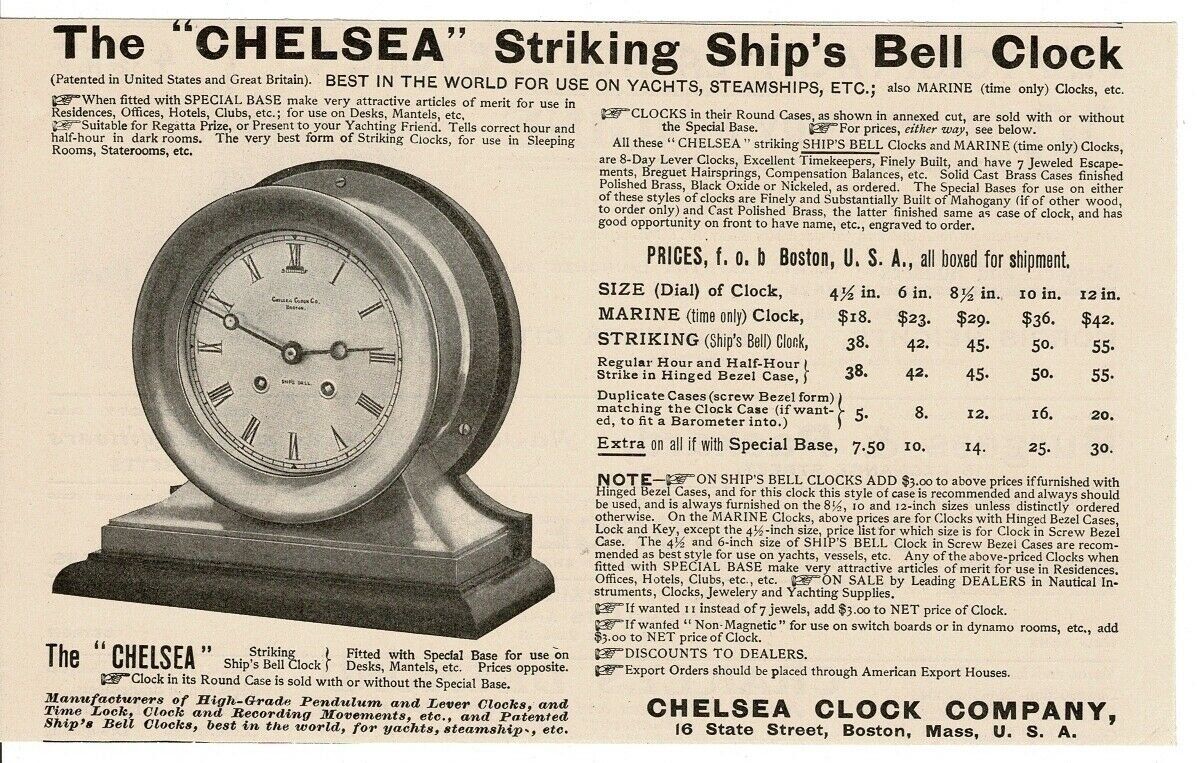 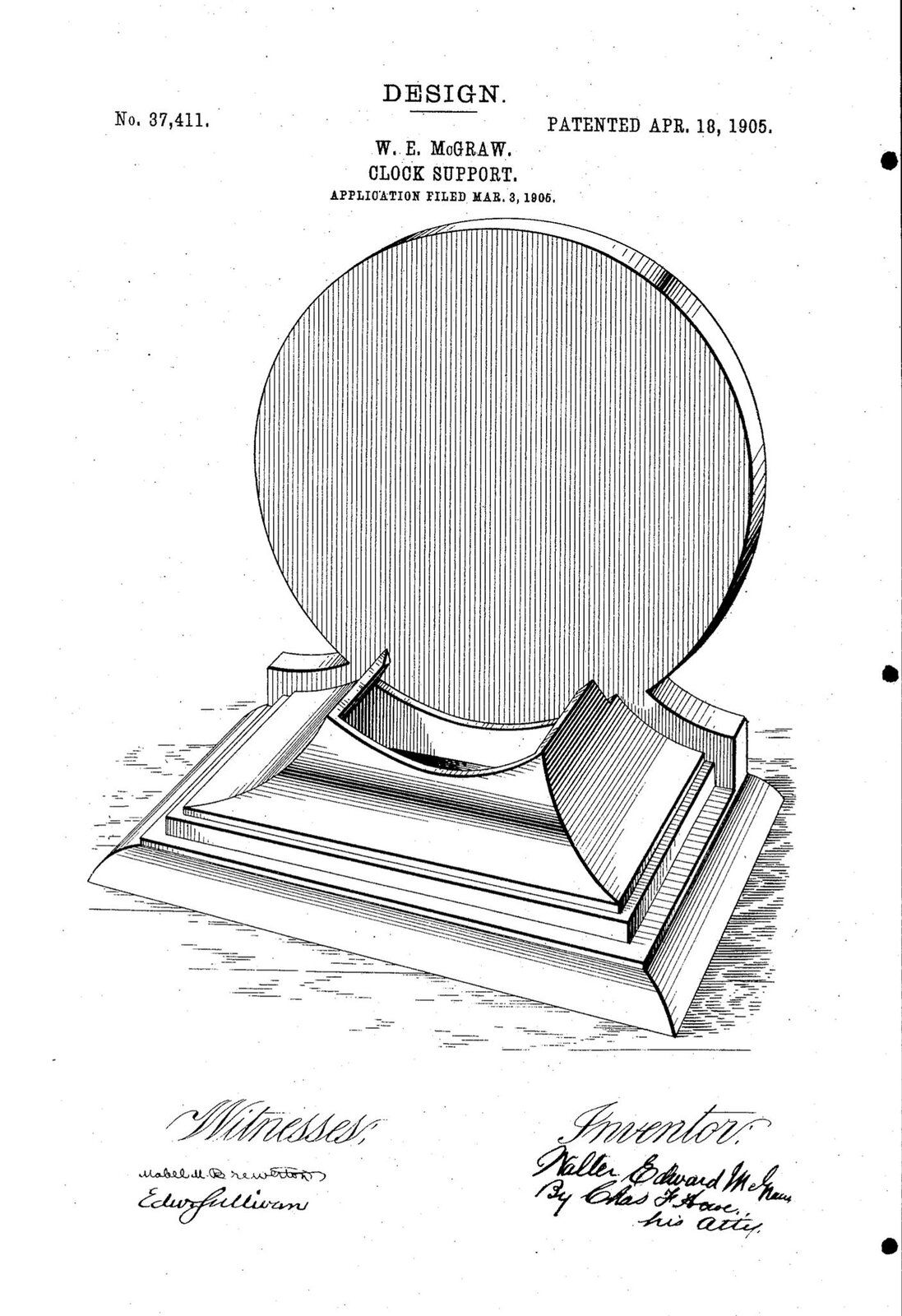 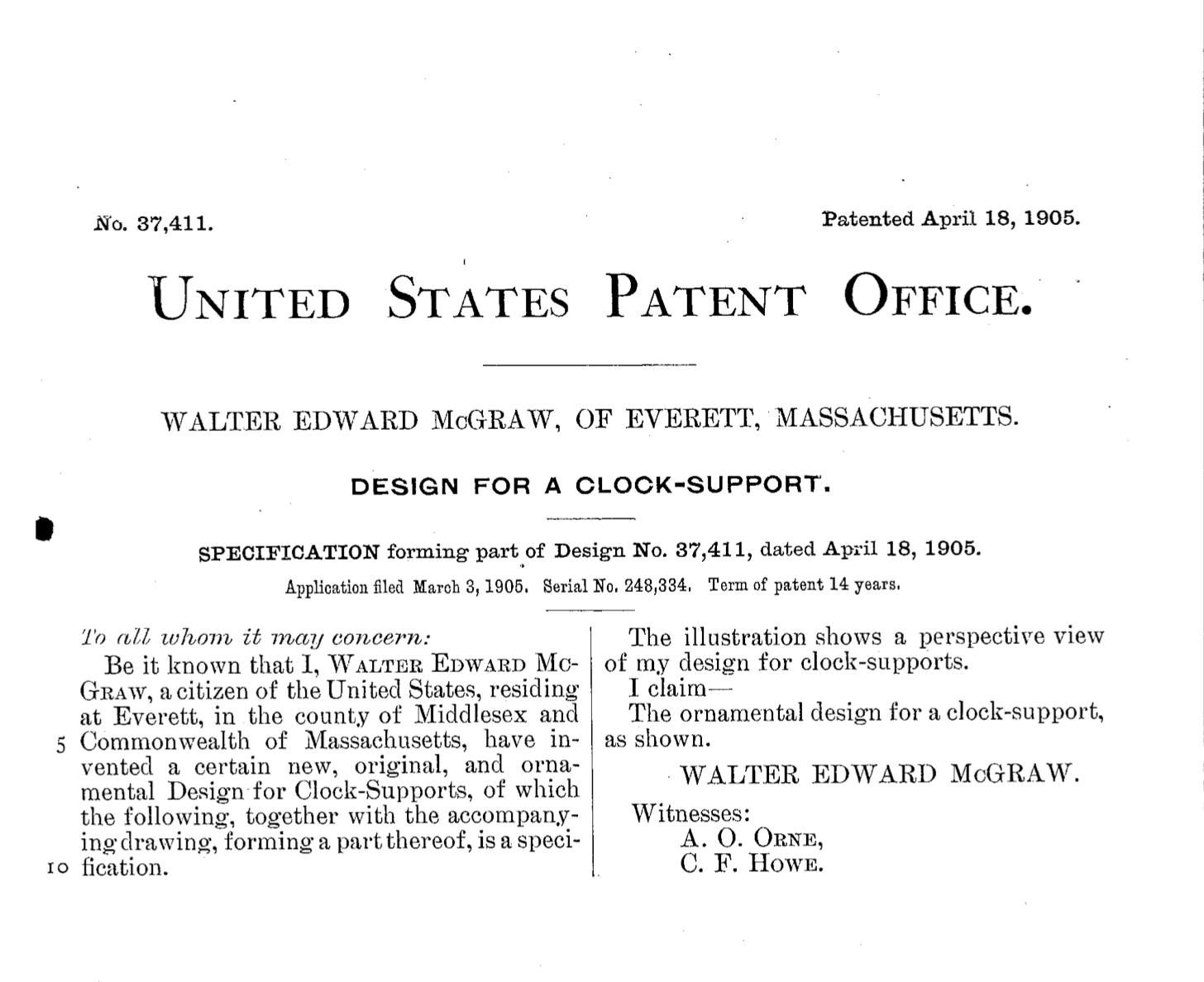 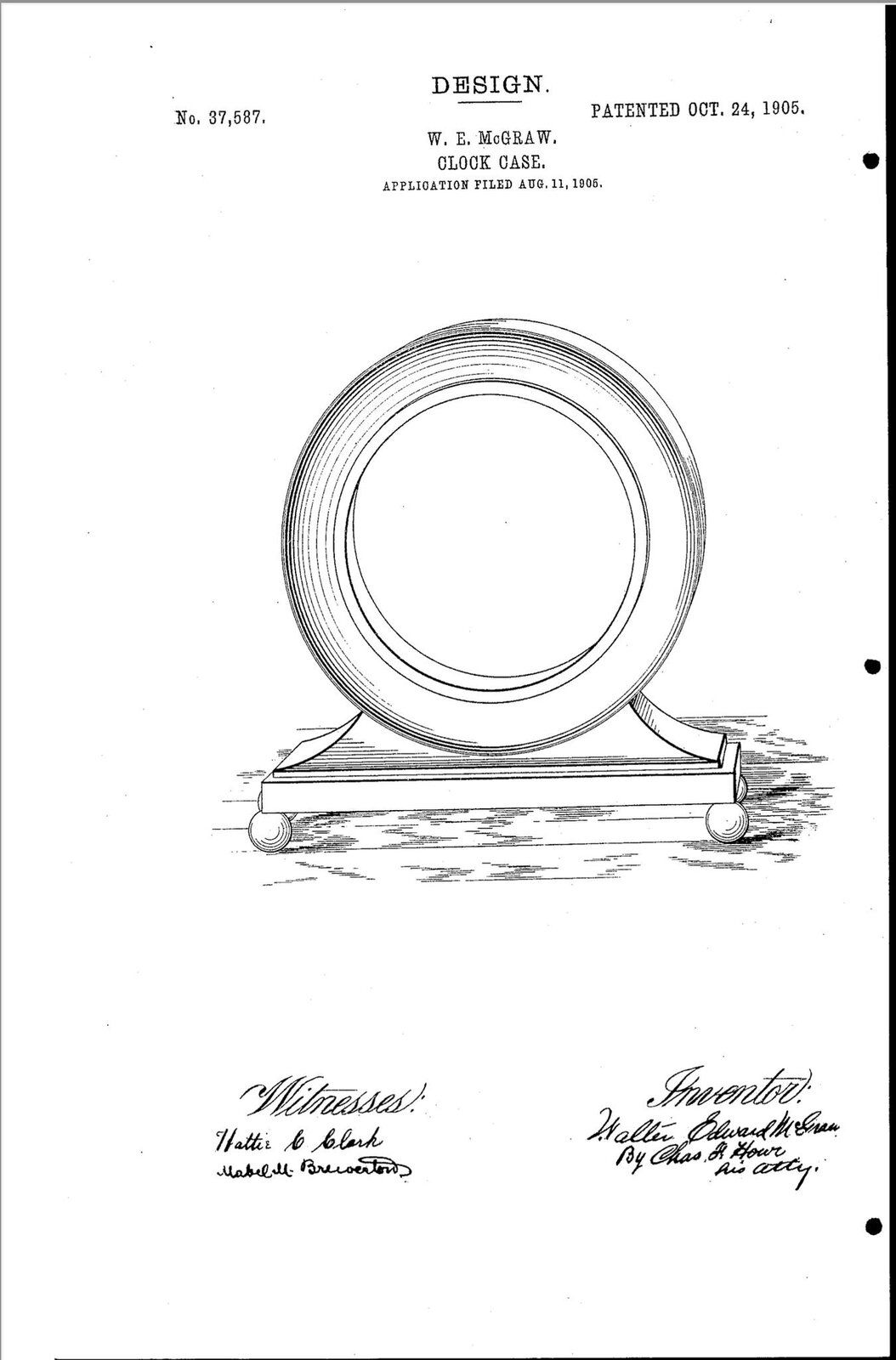 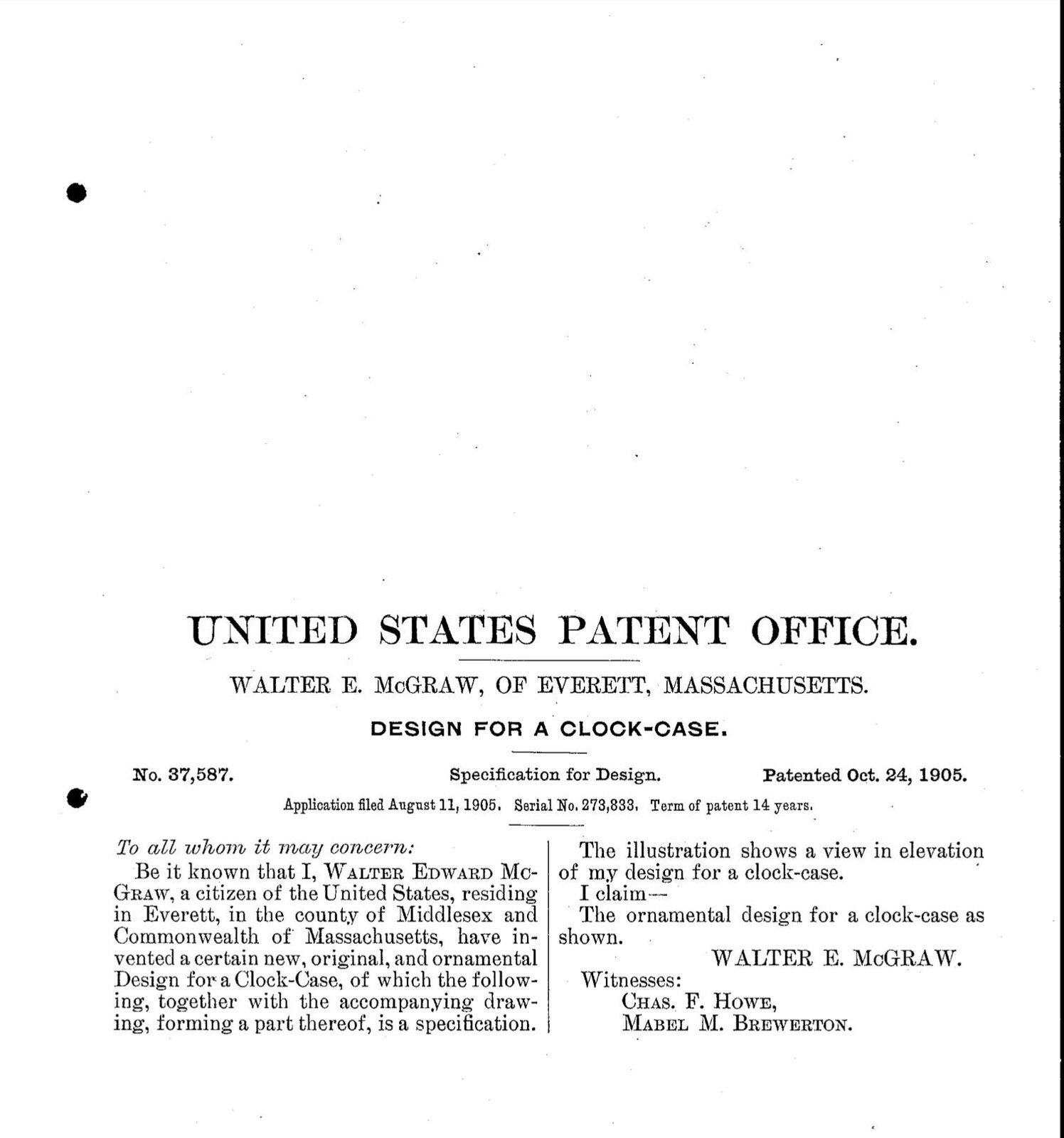 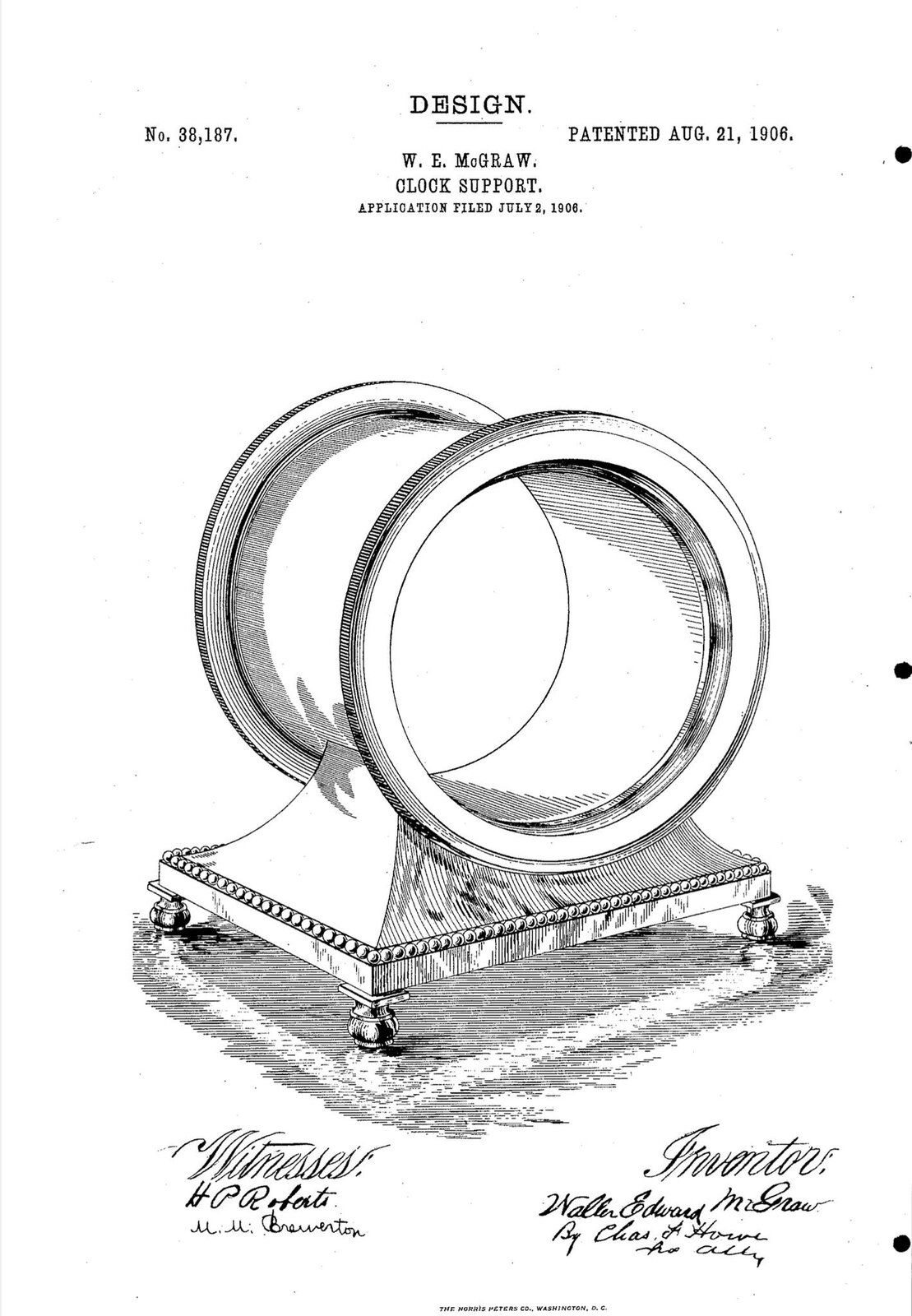 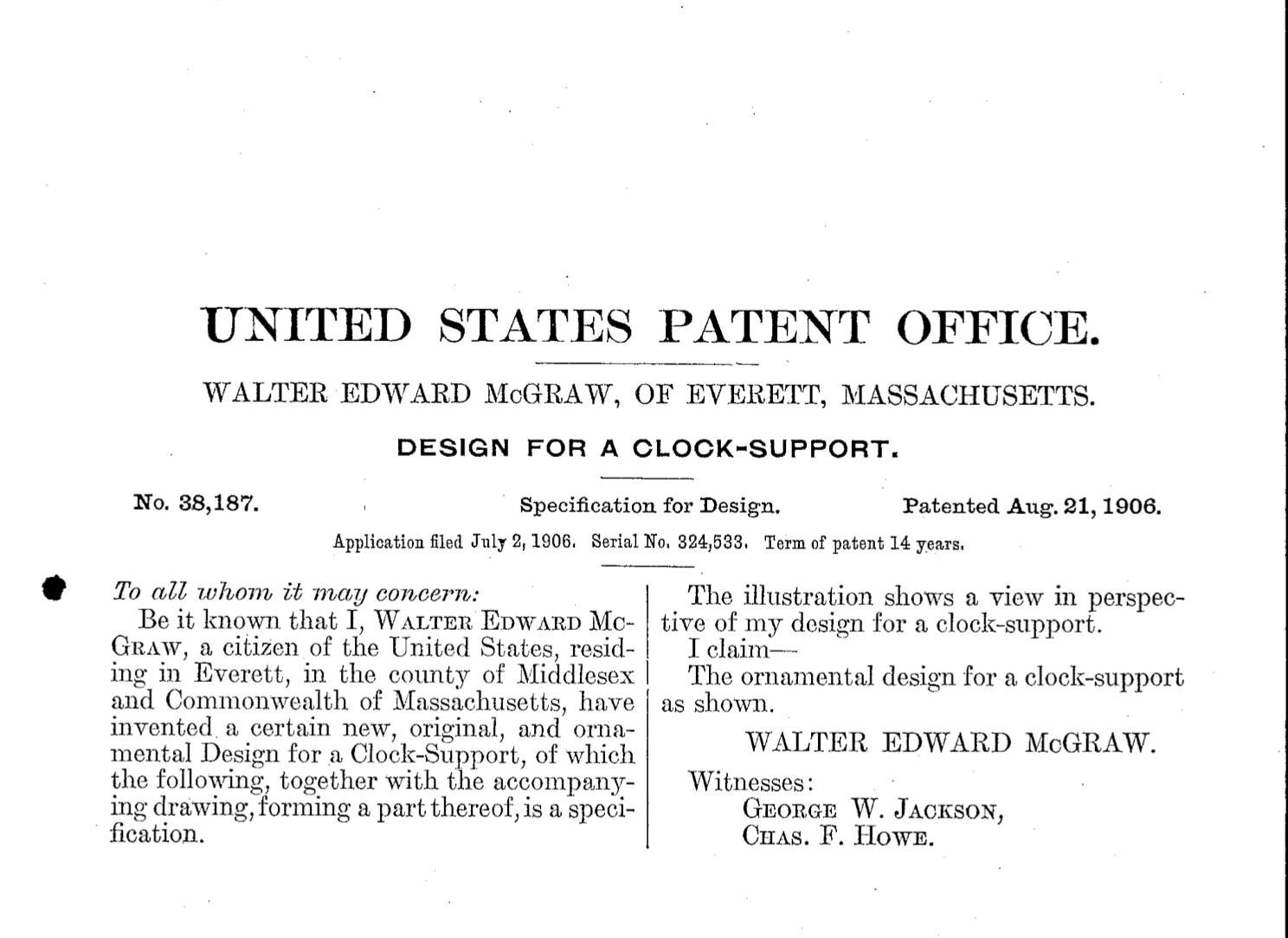 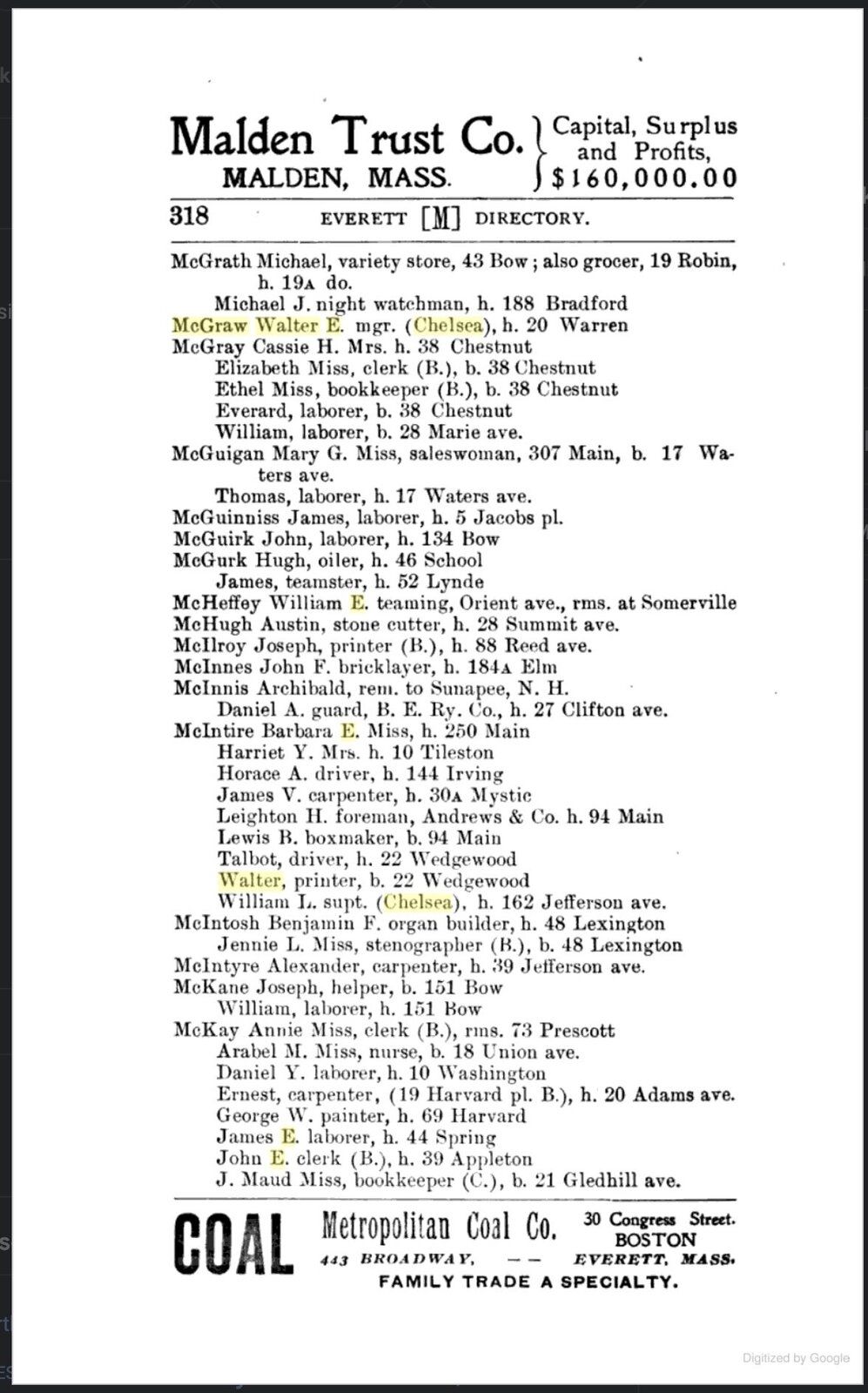 All roads lead back to Chelseaclockmuseum.Com. Bill, you should credit the source you got the majority of these documents from.
Last edited: Aug 19, 2022
B

eastmanj said:
All roads lead back to Chelseaclockmuseum.Com. Bill, you should credit the source you got the majority of these documents from.
Click to expand...

Hello Jim
First off you site is nice and very informative.
I used your site for its US PATENT LIST , that is linked to the US gov patent website . I highly recommend anyone looking at marine clock history to do the same .
Secondly , all of the ads from “The Rudder “ and the directory page was found directly from searching Google books archive.